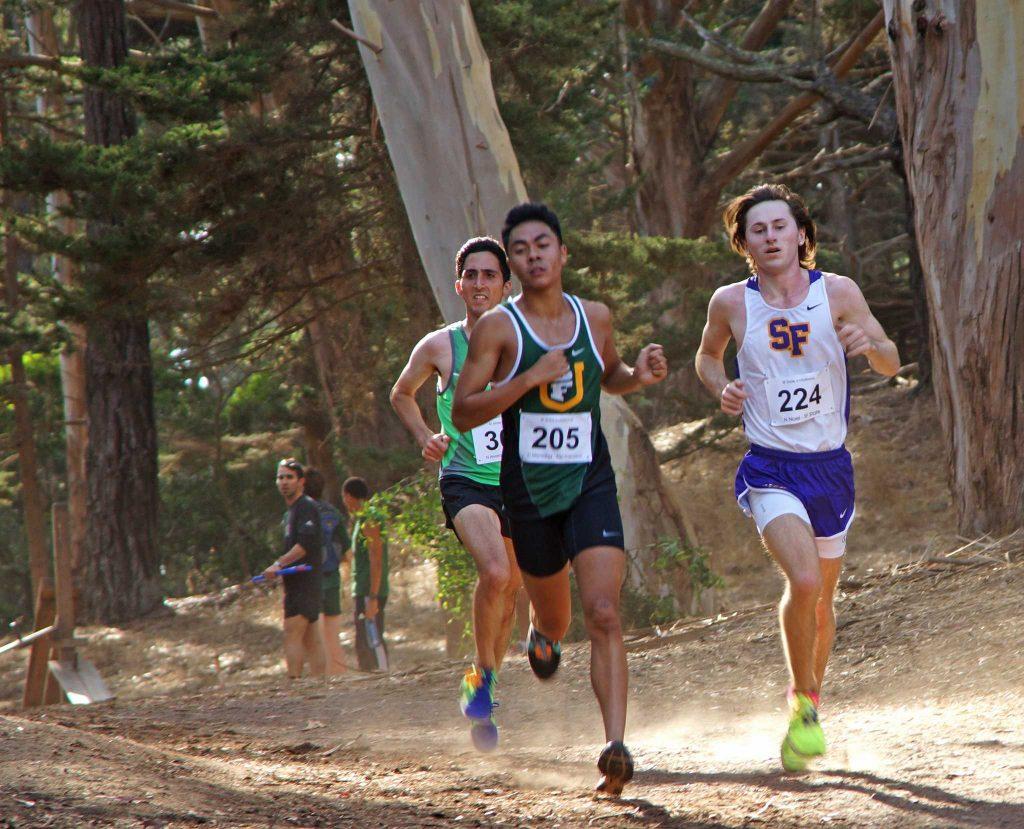 It was a battle between two San Francisco-based teams as Gator men’s cross country team once again fell second to Academy of Art University on Friday at the 30th Annual SF State Invitational in Golden Gate Park.

As the Blue Angels flew over Speedway Meadow, the Gators started the 8k strong with their top three runners, Drew Feldman, Benji Preciado and Kenny Trejo seemingly solidifying their placement near the front of the pack.

Feldman maintained his place as lead runner for a majority of the race, falling back only slightly in the final stretch.

“I think I did good individually, I felt competitive and felt like I was racing with the leaders,” Feldman said.

Feldman, who continues to heal from an achilles injury, finished confidently with a time of 25:03.3, taking first for the Gators and second overall, right on the heels of first place finisher Josh Thorson from Academy of Art.

“This was a big confidence booster for me honestly,” Feldman said. “I know what I’m doing is working. I’m just going to focus on keeping my injury healthy.”

Head coach Tom Lyons said the race overall didn’t go as well as he had hoped.

“I would have liked to be a little closer to Academy of Art,” Lyons said. “A couple of our guys ran really well but a few had off days.”

One of the noticeable few was Preciado, who started the race only slightly behind Feldman, but progressively fell back throughout the race, finishing fourth for the Gators and 23rd overall behind redshirt freshman Austin Sanchez, who finished 15th overall with a time of 25:53.3.

“Benji slipped back,” Lyons said. “He would have normally been up a little farther, so he wasn’t where he wanted to be.”

Preciado said he was unhappy with how he ran the race, attributing his uncharacteristic performance to feeling sluggish all week.

“I did horrible, it wasn’t a good race for me,” Preciado said. “It was overall just tiredness and I couldn’t get over it.”

Preciado admitted that he didn’t think he had eaten enough to perform at his peak prior to the race.

Feldman indicated the weather could have also played a role in some of the runners’ sluggish finish.

“The heat was definitely a factor,” Feldman said. “I think a few of us could have hydrated better, that could have helped, myself included.”

Trejo agreed that the heat was a prevalent factor, but said he felt he was mentally prepared and ran an effective race, learning from some of the mistakes he made in the previous race at Amend Park in Billings, Montana.

“I feel like the last race in Montana I did kind of go to far ahead of what the pace was and it ended up burning me out,” Trejo said. “This race I kept a little bit conservative and ran a good second half and that’s what I wanted to do.”

Trejo moved his way up towards the front of the pack, surpassing Preciado near the end of the race and finishing second for the Gators and 8th overall with a time of 25:53.3.

Ultimately, the overall scoring came down to a 20-point difference, with SF State earning 56 points to Academy of Art’s 36 points. SF State finished second out of 12 teams, with four Gators finishing in the top 25 out of 109 runners.

Feldman said he feels confident  the team will be able to push ahead of Academy of Art in the NCAA Division II West Regionals.

“I think we have more depth,” Feldman said. “If me and Benji can edge out their one and two guys, then we have a good chance of beating them at regionals.”

The men will race again on Oct. 22 at the CCAA Championships in Ontario, California.