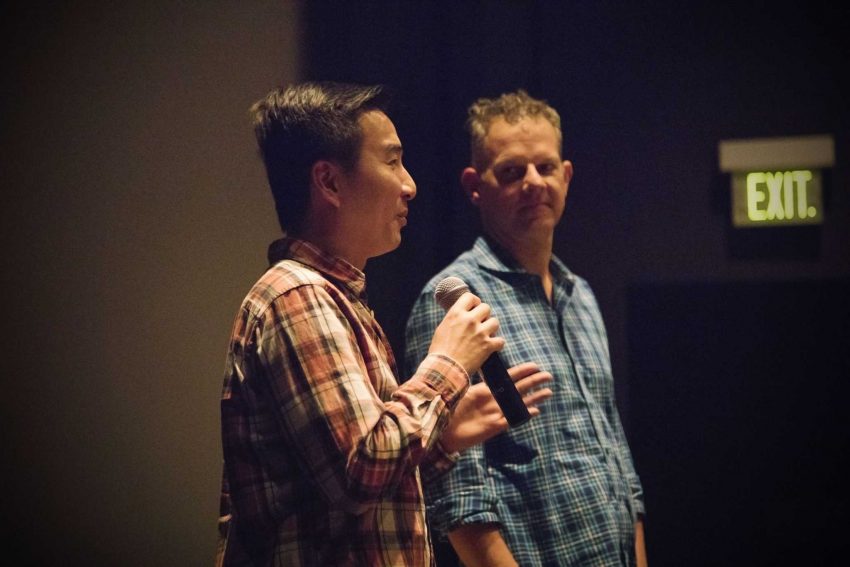 Filmmakers S. Leo Chiang (left) and Johnny Symons, SF State documentary professor, answer audience questions after the screening of Out Run in the August Coppola Theatre on Tuesday, Oct. 11, 2016. The film was presented in honor of National Coming Out Day.

When beginning their documentary, S. Leo Chiang and Johnny Symons decided on the title first — a title meant to represent outrunning bigotry and running forward into progress. “Out Run” was the result five years later, with the goal to inspire and unite the LGBTQ+ community. The documentary was screened at SF State’s Coppola Theatre on National Coming Out Day.

“Out Run” follows the year-long campaign process of the Ladlad party in the Philippines, the world’s first and only LGBTQ+ political party. The documentary follows Bemz Benedito’s campaign to be the first transgender woman in the Philippine Congress and chronicles Benedito and her LGBTQ+ team from their first day of campaigning up until the day of the election.

“We’ve seen a lot of advances here, but we were really curious about other parts of the world, so we looked for stories overseas,” Chiang said. “We were actively pursuing out candidates, but the tricky part is that the media only reports on these people when they’re elected, not when they’re running.

One of the main problems the LGBTQ+ community has in the Philippines are the roles that they’re relegated to, according to the filmmakers. The documentary emphasizes how homosexual or transgender individuals are rarely accepted unless they’re working in beauty parlors or performing in pageants. The party and the documentary fight to erase these marginalizations.

In addition to being filmmakers, Symons and Chiang are both professors. Chiang has been an adjunct professor at UC Santa Cruz and Northwestern University, and Symons currently teaches at SF State.

The concept for “Out Run” began in 2011 and was officially released in April 2016. Since its premiere, it has been screened at several festivals, most notably Frameline40, San Francisco’s annual international LGBTQ+ film festival at the Castro Theatre. According to Symons and Chiang, the reactions to the documentary have been very positive and viewers have strongly identified with the LGBTQ+ politics in the film.

“Audiences have been struck by the experience of viewing such a familiar thing through a different lens,” Symons said. “They’ve taken a deep dive into something they didn’t know anything about.”

As Symons and Chiang are both part of the LGBTQ+ community, they hoped viewers would be inspired by the different efforts of the Ladlad party and get a real sense of LGBTQ+ issues as a global phenomenon.

“I feel it lets people see various experiences, so they understand and don’t assume that everyone has the same narrative,” Chiang said.

SF State’s cinema department played a large part in producing this film. About eight to 10 of Symon’s students helped with some of the post-production aspects such as translations, editing, outreach and distribution.

“It’s the way things go,” said 34-year-old John Alonso, a cinema major and one of Symons’s students. “I recognized a lot of the names in the credits, there’s so much support within the department and amongst the faculty.”

Alonso, who came to the screening, thought the documentary was brilliant and said he believes that portraying this type of narrative is an important thing.

“We’re very fortunate to be in the Bay Area, where LGBT communities have so much support from the general public,” Alonso said. “It’s great to see a different type of society that’s also having a movement.”