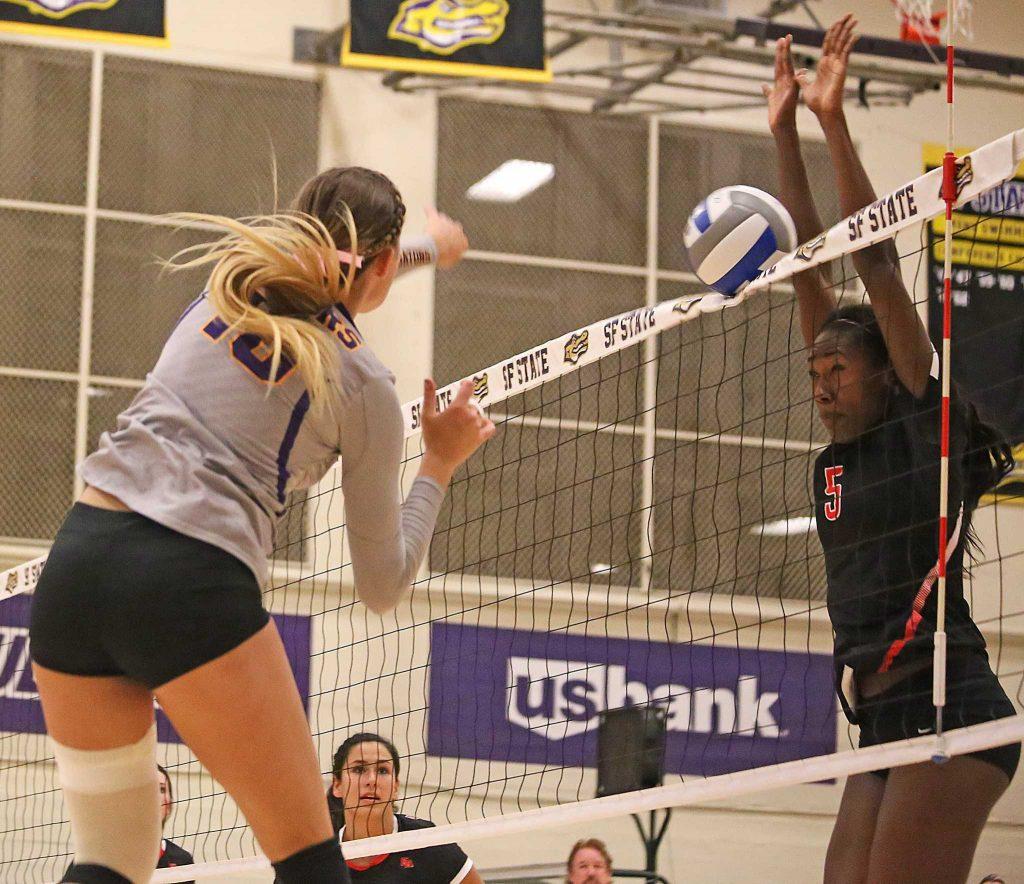 SF State Gators’ outside hitter Christine Johnson (18) fires the ball into the net during their loss to Cal State East Bay on Friday, Oct. 21, 2016. The Gators lost three out of the four sets to the Pioneers.

Aside from the special night, the Gators got nervous, which affected the team performance, according to head coach Matt Hoffman. Outside hitter, Danielle Ryan admitted that the nerves began to set in after they won the second set.

“Nerves set in and that’s when you allow a team to get back in the game,” Hoffman said. “They (Pioneers) were making errors and we didn’t capitalize. We weren’t ready for that moment when it matters a little bit more.”

The Gators battled in a tight first set but their constant inability to take over in close sets allowed the Pioneers to rally and close the set 25-17. They overcame their set woes in the second when they made a run of their own by winning 25-20.

After a rare set win, the Gators experienced a sudden downfall, losing the third set 25-19 and the final set 25-15.

“We’ve gone through the period where we’re getting better but it’s not showing on the court,” Hoffman said. “Tonight we had evidence of all the “getting better” showed on the court by winning the second set and then nerves set in because we haven’t been in that position in a while.”

Ryan finished the game with five kills, one block and recorded the second highest individual digs this season for the Gators with 20. Outside hitter, Christine Johnson also contributed sufficiently with 14 digs, two blocks and a team high 13 kills.

“That usually doesn’t get to us but it did and caused us to make many mistakes,” Ryan said.

Outside hitter, Kaitlyn Clemann said the Gators look forward to bounce back in their next game and expects herself and the team to perform better.

“Our focus is to play a really clean game, don’t let anything get to us and fight for every points,” Clemann said.

The Gators will cap off their three game home stand and seek a desperate win against CSU Monterey Bay on Oct 22.