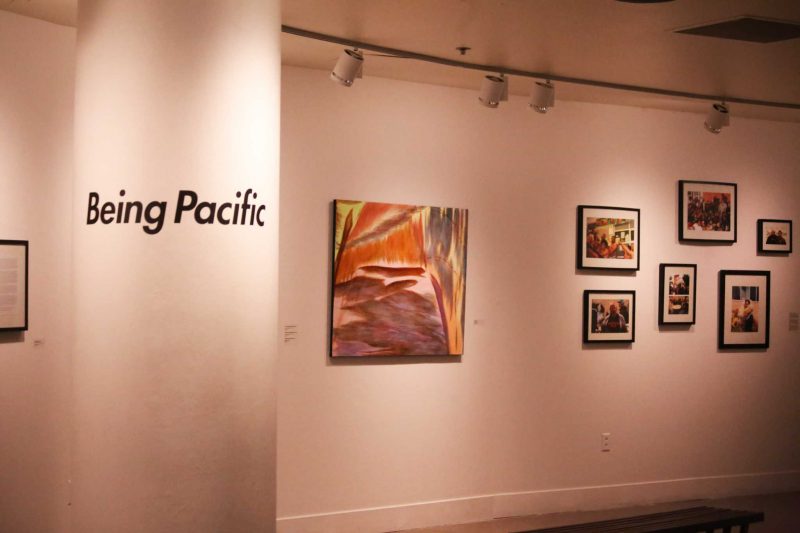 A crowd gathered outside the Associated Student Art Gallery on Thursday evening anticipating the “Being Pacific” exhibition’s opening reception to commence. Each painting, photograph and artifact within the gallery related to a cultural aspect belonging to the Pacific Islander identity. A strong connection to the ocean was evoked in many of the art pieces and in quotes that adorned the walls as a depiction of power and knowledge among Pacific Islanders.

The excitement continued throughout the night as speakers and performers took the spotlight to expand on the Pacific Islander narrative captured in the art exhibit. The public consisted of students and members of the local Asian Pacific Islander community. Art from prominent local artists was displayed.

“A lot of places try to say that they support Pacific Islander Studies or Africana Studies, whatever cultural studies it may be, but they’re actually talking about tokenism,” said gallery curator Topher Maka. “I wanted to create a platform for people to express themselves in their own words and not through other people’s interpretations.”

Many of the speakers read from the Matamai Anthology, which held a collection of stories and poems about the Pacific Islander identity from students of City College of San Francisco and took part of professor David Ga’oupu Palaita’s Pacific Island studies class.

Andrew Vai read from his poem “It’s Been 2 Years and Some Months.” The poem described the struggles of being evicted and by the end of the reading Vai was holding back tears. Later he asked the audience to engage in a reading of another poem and had them repeat lines.

Between the speakers, recent alumnus, Spulu Pacific performed a dynamic dance with flowing, wave-like movements. Later, members of SF State’s Asian Pacific Islanders’ Club announced they were holding talks with President Wong the next day in an effort to expand Pacific Island Studies. Their efforts were also outlined in a letter framed in the gallery, which expressed their involvement in the Ethnic Studies strike and their demands to expand Pacific Islander Studies.

“We demand proper representation within the College of Ethnic Studies, separate from Asian American Studies, resulting in at least a minor,” the letter said.

“On the seven hills town hall around March, I was one of the folks to speak about the injustice that we’re not represented and to demand that we have Pacific Studies here at SF State,” said Pacific Islanders’ Club member Rex Halafihi, addressing the student-led endeavor to expand Pacific Island Studies at SF State. “Our histories are more than just a week in infusion with Asian American classes and that our histories are as deep and complex as the ocean where we come from.”

“Being Pacific” is on display through Nov. 10.