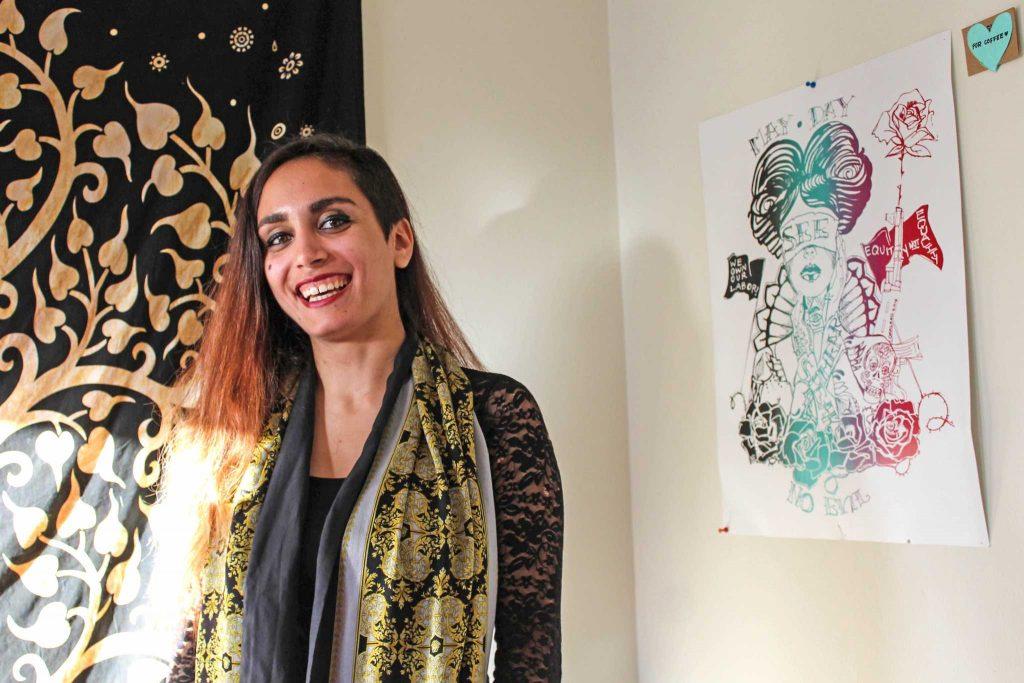 20-year-old SF State junior Alisar Mustafa poses for a portrait in her on-campus housing on Monday, Oct. 17, 2016. Mustafa who was born in Tartus, Syria left when she was 14 years old and currently is the event director for the SF State Political Science Student Association.

Alisar Mustafa wants to change the lives of those affected by the civil war in her homeland of Syria through awareness and education.

Mustafa is a 20-year-old junior majoring in political science and minoring in Middle East and Islamic studies at SF State.

“Even though I lived there for 14 years, studying it from a political perspective is very important,” she said. “Understanding Islam is a huge part of the Middle East, not to say that is representative of it, but to understand how religion and politics are interrelated is important to me.”

During the summer following her high school graduation in 2014, Mustafa, her brother and four other teens participated in a school program that helped refugee children. Because most of the children arrived from Syria, Iraq, and other Arabic-speaking countries, they learned to speak English in addition to being taught various subjects in the program.

Mustafa met two brothers in that program from Iraq who were relocated twice before moving to the United States. The boys had given up on learning because they felt it had no use after moving so often, but the program allowed the boys to express their experiences. This inspired Mustafa to focus her volunteer effort on education for refugee children.

“Education is important because in order to be out of there (refugee camps), or even to just be a functional human being, you need education,” Mustafa said. She thinks refugees need education to find peace and a sense of self worth.

Mustafa grew up in Damascus but was born in Tartus, a city by the coast of Syria. She lived briefly in Austria before moving to the United States.

“I don’t know how to describe it… not realizing you are somewhere else,” Mustafa said.

It was difficult for Mustafa to assimilate to the Bay Area in the beginning, but she gradually adapted to her new home. After living in Berkeley and Sacramento with her family, she moved to San Francisco to pursue her degree.

For a long time, it was hard for her to think of Syria as her home, because she only had memories of it.

However, that changed in 2015 when Mustafa translated her father’s memoir from Arabic to English. The book “Levant Fever” was about her father’s years as a prisoner in Syria and taught her much more about her family and their experience.

Mustafa also felt more committed to spread awareness within the school community that year. She thought it was important to inform others about the consequences of the civil war in Syria.

When working as a resident assistant, she asked her manager at the time if she could create an event to bring awareness to SF State about the struggle Syrians have trying to leave their country.

“I felt that no one knew what was happening in Syria or about the refugees,” she said.

Mustafa created the event “Hearts for Syria” in the fall of 2015 to inform students about Syrian refugees, which she repeated in spring 2016. This semester she began raising money through UNICEF.

Mustafa is also trying to raise awareness within the SF State community with a petition she started through the campaign Books Not Bombs, which calls for universities from around the world to give 10 scholarships to Syrian students.

“Education is important in refugee camps. They can get food and water, but you need that basis of strength, education,” she said. “If you are in a refugee camp, and you are scared, you can’t learn anything.”

Mustafa was inspired by a Humans of New York story about a girl whose family was denied refugee status in the United States. The fact that the girl taught herself English and worked for a non-governamental organization in Syria reinforced in her the importance of education.

Bombs and missiles have targeted at least 4,017 schools in Syria as of November of 2015, according to the Books Not Bombs website, and over 3.3 million Syrian students no longer attend school.

According to Mustafa, social activists started the civil war in 2011 because of “the frustration within their hearts” toward their dictatorship. She believes it’s difficult to help those in war zones, but once they get to refugee camps, society has the humanitarian responsibility to help Syrians.

“I think that if someone can go to those refugee camps and treat them as a venue for growth for children and adults, and not as a problem, it’d be different,” she said.

When it comes to the upcoming presidential election, she is not very optimistic about either politician.

“I don’t think that they will care about Syria, there is really no stake for them there economically.”

Mustafa is currently the event director for the political science student association and enjoys being involved in the department and their events. She plans to go to law school to study international law after graduation next year. Her goals are to work for a non-profit and eventually start her own.