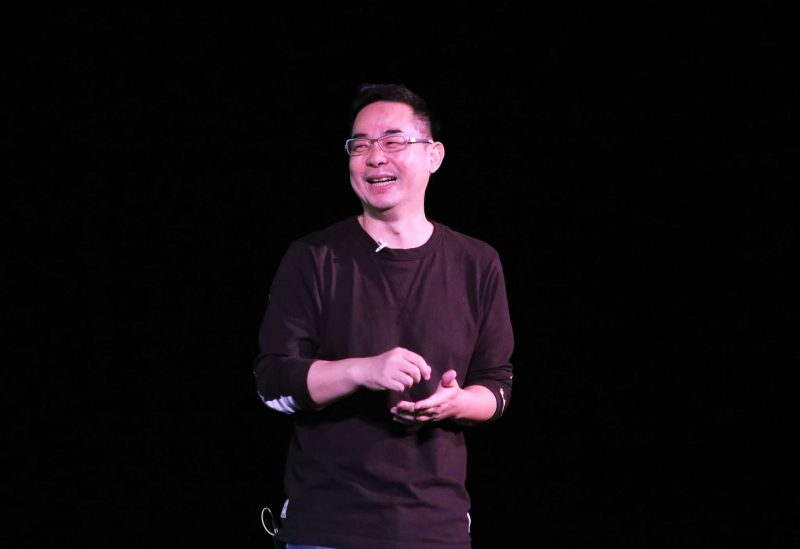 Children’s book author and illustrator Jimmy “ Jimi” Liao reacts to the host before presenting his work to a packed audience during the “Dreamy Afternoon” event at McKenna Theatre on Saturday, Oct. 22, 2016.

Correction: An earlier version of this article misspelled Jimmy Liao’s translator as Chris Lee, but it has been corrected to Professor Chris Li of the Chinese Program at SF State.

Due in part to sponsors such as China Airlines and the Argonaut Hotel, the Chinese Program at San Francisco State was able to fundraise the approximate $35,000 needed to host Taiwan’s most beloved children’s author.

Liao has written over 50 books, including “Secrets in the Woods,” “A Fish with a Smile,” “Starry Starry Night” and “Kiss and Goodbye.”

Attendees of “A Dreamy Afternoon” were able to not only hear Liao read from a couple of his books but also view two short animated films that are based on his books.

Winnie Lee, 36, is originally from Taiwan and collects his books. She heard about the event on the news but wasn’t able to secure her ticket to the reading before it sold out.

“I saw that he was coming about two weeks ago, and I recognized his name from when I was living in Taiwan,” Lee said. “We came even though we couldn’t get tickets because we saw that there would be a wait list. I love his books, I don’t think they are just for kids, I think even adults can enjoy them. There’s even a park in Northeast Taiwan that is modeled after Jimi’s illustrations.”

Ultimately, Lee and everyone else who didn’t have tickets were able to attend the reading.

Associate Professor of Chinese and Associate Director of the SF State Chinese Flagship Program Frederik Green has wanted to bring Liao to SF State since he met him about a year ago. Due to his popularity in the Chinese-speaking world, Green describes Liao as the Chinese J.K Rowling.

“It is very exciting to have him here in San Francisco,” Green said. “We started fundraising for this event around late April/May, and I said if we can raise at least half of what we need to by August 1, then we’re gonna go for it.”

Padma Ledik is a 21-year-old Chinese major at SF State and volunteered her time to pass out illustrated pamphlets and check people into the event.

“I’m only volunteering today,” Ledik said. “But I know they’ve been working hard at putting this event together for months, since at least summer.”

Jimi had a translator, SF State Professor Chris Li, on stage with him to assist with translating his Chinese to English. Although, by the amount of laughter after Jimi told a joke in Chinese, it became apparent that English was not the primary language of many of those in attendance.

Liao has made his mark all over Taiwan. His artwork can be found in the subway stations in Taipei, on Taiwanese postage stamps and many of his stories have been made into movies and stage productions.

When he was approached about writing his first children’s book, Liao said he hesitated and thought to himself: “All I knew how to do was draw.”