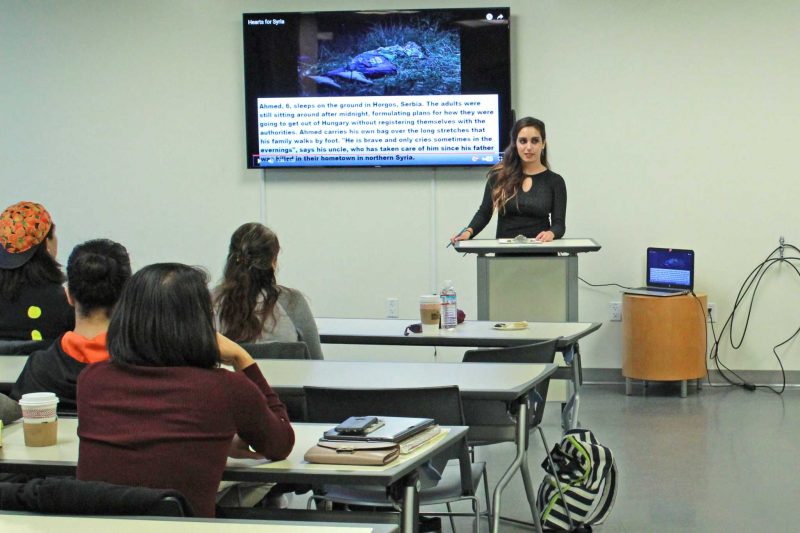 Guests helped themselves to authentic Syrian food and received henna tattoos for cash donations at the “Hearts for Syria” panel discussion held in the J. Paul Leonard Library Monday night.

Volk was the first of the panelists to speak. She provided 10 minutes of history, covering multiple triggers to the Syrian refugee crisis that sparked in 2010 after local community members decided to rise up against the country’s regime. Since the start of the civil war, an estimated 11 million Syrians have been displaced, while 13.5 million are in need of humanitarian assistance.

“Who do we blame at this point?” Volk asked. “I’m giving you a couple of choices.”

Some of the contributing factors Volk discussed included Syria’s current regime, along with Syrian president Bashar al-Assad and the continuous conflict between U.S and Russia.

“Blame the U.S. and Russia, of course we can and we must, because those two are still fighting the Cold War and they’re doing it in Syria,” Volk said. “We have a war that’s ongoing because their big guns are trying to prove a point; they’re fueling it and causing more conflict.”

The vast majority of Syrian refugees are heading to neighboring countries, with Turkey, Lebanon, Jordan, Egypt, Iraq and Sweden taking in the most.

According to Volk, resettlement of Syrians in the U.S. is completely out of proportion to what is happening in the rest of the world.

Though U.S. states have no legal ground in opposing refugees, Volk explained that 30 states have vocalized disinterest in accepting refugees into their communities, with a few being Maine, Florida, Texas and Idaho.

The U.S. reached its Syrian refugee capacity of 10,000 in August of this year, but will reopen its doors to Syrian refugees next year and accept an additional 10,000, Volk said.

Some audience members were disappointed to hear about the U.S. cap number, and how the country only accepted 10,000 displaced Syrians.

“I don’t feel proud to be a part of something like that, and 10,000 people – that’s a positive thing that we’ve done that, but the fact that it’s our cap and we have to wait until next year really saddened me,” Roorda said.

Though Syrian refugees have been largely accepted in most European countries, German Consul Patrick Heinz discussed the difficulties countries like Germany are facing when attempting to aid so many people.

According to UN Refugee Agency, there were 65 million refugees around the world in 2015 alone. European countries are doing their best to aid those in need of refuge but are facing criticism from their own people.

“The question is: how can we as people living in our age, live up to this global challenge?” Heinz asked.

The panel continued to discuss ways in which people can assist in aiding refugees. Some included donating and volunteering for UNICEF and organizations like it. Another suggestion was to take part in this year’s election in order to nominate the right leaders to spark change the current refugee capacity numbers.

“The larger issue is political. I hope you guys are all voting this year,” Volk said. “We have a candidate that wants to build walls and one who is a little more open. And it starts with the national elections.”

Damneet Kaur, a health education major, said that several of her professors have encouraged students to reach out to congress as a way to take a stand to humanitarian issues.

“Maybe not everything can be fought by policy, but it doesn’t hurt to try,” Kaur said. “If you are a person who lives in this country and hopefully has the opportunity to be a citizen, these are your rights.”