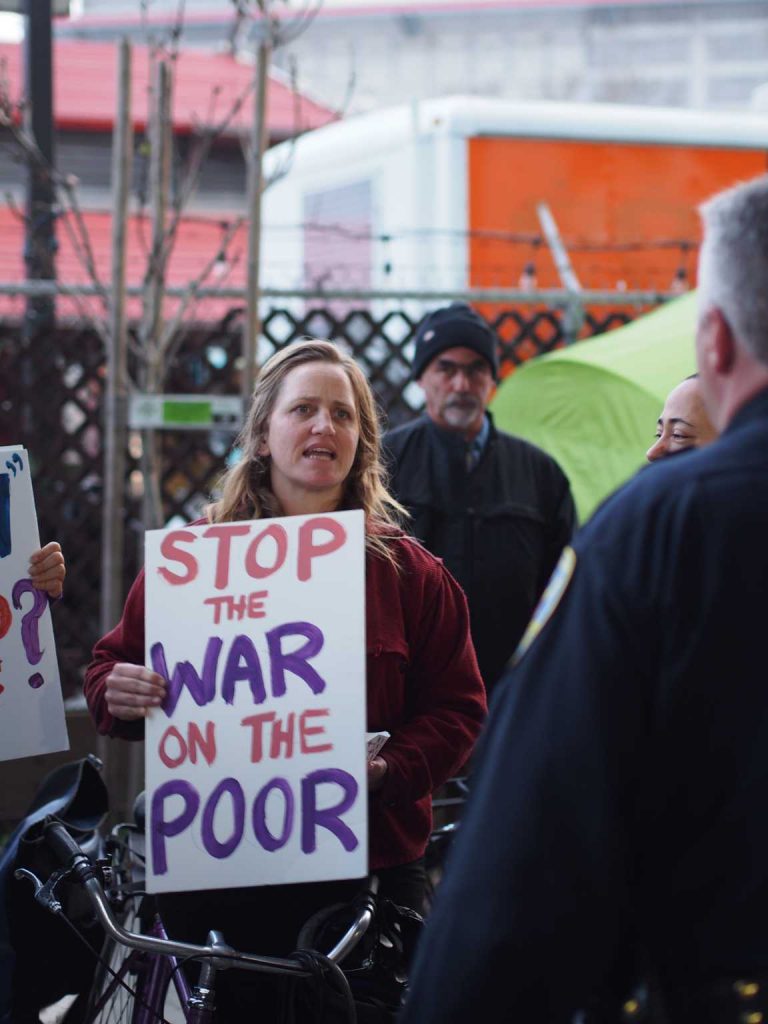 A protester confronts San Francisco police Lt. Michael Nevin (right) during the homeless encampment sweep of Division Street on Saturday, Feb. 26, 2016. Peace and Freedom Party candidate Gloria La Riva has made fighting homeless one of her top priorities in the upcoming election.

Gloria La Riva doesn’t expect to become the next American president. She knows the odds are stacked against any third-party nominee, let alone a socialist. But that isn’t stopping her from running for the second time.

In some states, La Riva will be on the ballot with vice presidential candidate Dennis Banks as the Peace and Freedom Party, but in some she is with Eugene Puryear as the Party for Socialism and Liberation. The platforms for both are explicitly socialist.

But La Riva and party organizers at the Mission Street campaign office said the Sanders phenomena has helped to open doors.

“We get very, very little pushback for being socialists,” La Riva said. “It’s much easier to talk about socialism now.”

Nick Pardee, an organizer for the Peace and Freedom Party, recognizes Sanders’ role in bringing the word socialism out into the light and making it allowable for people to discuss.

“Other than that, he totally capitulated to Hillary Clinton and he really sold out,” Pardee said.

A broad ideological space separates La Riva from Sanders but the Peace and Freedom candidate doesn’t attribute the differences to the word democratic.

“I always say that socialism is democratic because people have a say,” La Riva said. “I believe that democracy really has to do with essential human rights.”

The party’s core platform and 10-point program outlined on their website are built around the claim that a socialist system can eradicate institutionalized racism, police brutality and mass incarceration as well as grant citizenship to all residents and ensure equality for all women and LGBTQ+ people.

Pardee hopes the party can get their plan out to the widest audience possible and compel some to learn more. He was personally attracted to the party because they share his belief that people have a right to live with dignity in work, home, health and education and that capitalism inhibits that goal.

Despite their involvement in the current political landscape, La Riva and Pardee agree that the end of capitalism won’t likely be the result of any election.

“We don’t believe in the electoral system as a fair and just example of democracy,” Pardee said.

La Riva doesn’t think socialism will happen in the United States through elections.

“It’s just not possible,” La Riva said. “It’s a locked up system for the two parties of capitalist power to maintain their power…so the role of the party is to expose the lies of the candidates…to provide an alternative for people to vote, but also to show again the power that people have outside the elections.”

La Riva’s motive in running for president is less about winning and more about inspiring people toward a mass movement to demand justice for people on all fronts.

“That’s an important concept to understand, that the people make the change,” La Riva said. “Revolution and socialism comes about when the people are in motion.”

La Riva says it’s important for her party to be wherever the people are struggling for justice and to support causes like free healthcare and education, the Fight for 15, opposition to war, police brutality and equality for all residents.

Pardee fears that we’ll only become more conservative and pro-military with either of the major party candidates.

“The idea that you have to vote for the lesser evil makes it so that every four years the candidates are shifting farther and farther to the right,” Pardee said. “A vote for Hillary Clinton is a vote for war.”

La Riva and her supporters don’t plan to rest after the election results come in next month. The Peace and Freedom Party is looking to engage people beyond the scope of the election and have organized a counter-inaugural march in Washington DC on Jan. 20.

“Let’s start fighting on Nov. 9,” La Riva said. “We’re going to launch a mass announcement in this country – that all people should join together to demand the things that everybody needs.”