Men’s soccer dominates in highest scoring game of the year 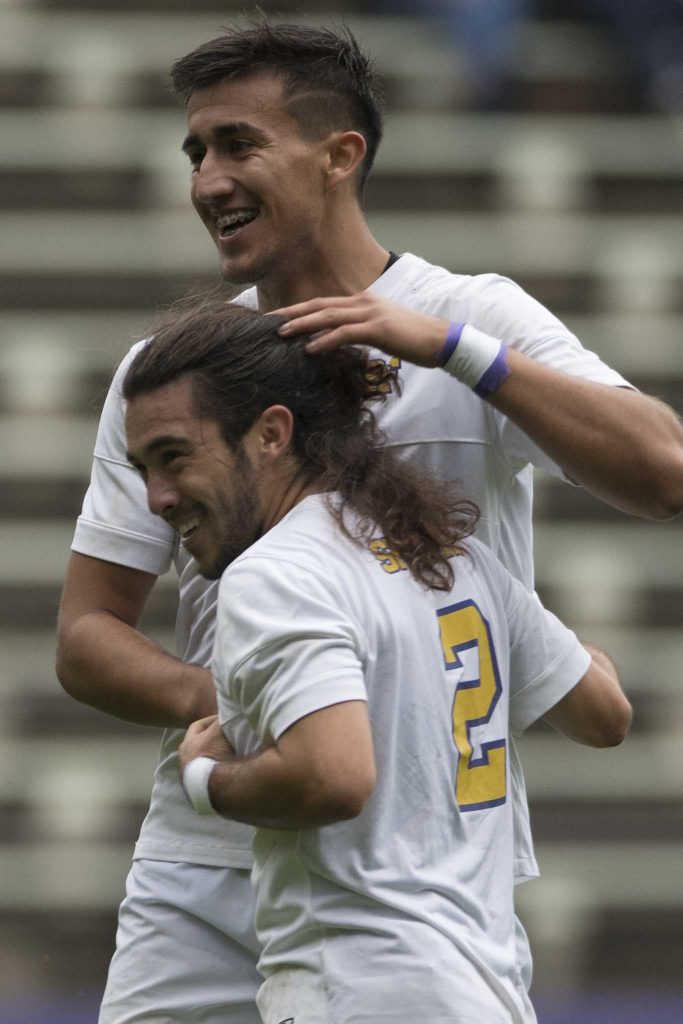 “From the beginning it was strong, we came out with mentality to win the game no matter the circumstances,” starting midfielder Ashley Watson said.

The team’s strong will and group effort lead to holding control of the ball for a majority of the game, ultimately allowing the Gators to outshoot the Pioneers 27-12.

“We had a lot of chances and we put them away,” first-year coach Javier Ayala-Hil said. “I think it came down to us executing and coming through.”

Substitute midfielder Francisco Saucedo said that this strong possession of the ball was collaborative effort that came together successfully as the season comes to an end.

“Everybody was on the same page today, knowing that we were going to go out and just play with everything we have,” Saucedo said.

Saucedo played a monumental part in the dominant win, putting the Gators on the board in the first half in the 38th minute and scoring again in the second half giving the Gators an insurmountable lead over the Pioneers. The goals were Saucedo’s first of the season.

“It definitely felt good to get on the board,” Saucedo said. “I felt relieved, just because we got ahead that much farther.”

Ayala-Hil said Saucedo’s double-scoring game was a great way for him to finish out a season in which he had difficulty executing his shots when up to the net.

“Definitely feels good to get one in the back of the net and gives him confidence going forward,” Ayala-Hil said

The Gators scored a shocking five goals during the second half of the game, including Saucedo’s second shot as well as the final goal by sophomore substitute midfielder Jordan Wusstig, a shot by starter KJ Ahlo in the 67th minute of the game, and two goals made by center back Marco Ruelas, his first of the season.

Ayala-Hil said he was impressed by the goals made by Ruelas, the starting center back for the Gators.

“Center backs don’t get to score too often, so when you have him score two in one game, that’s an accomplishment,” Ayala-Hil said.

The Pioneers were only able to score on the Gators once with a last minute shot from midfielder Christian Gonzalez in the 84th minute, but it was too little too late as the Gators had all but swept the Pioneers in their penultimate game.

Watson and Saucedo said their team is ready to go into their final game this Saturday, October 29th at Cox Stadium with the continued momentum of yesterday’s game.

“Everybody is going to play their heart out because it’s their last game, especially for the seniors, but for all of us as a team too because we are all just really close as teammates,” Saucedo said.

Four of the graduating seniors Gators, including Watson, will be honored prior to the beginning of the game against Stanislaus State.

Ayala-Hil said that even though the team was unable to earn a spot in the playoffs this year, he felt the season was a great growing experience for himself and his team.

“We’re trying to create an identity here, especially with me being a new coach,” Ayala-Hil said. “I definitely learned a lot this year and I think that what we are trying to implement is working, it just takes time to get to where we want to get to.”

Ayala-Hil said the ultimate goal for next year will be to make it to the CCAA tournament, but until then he wants to end the season on a positive note.