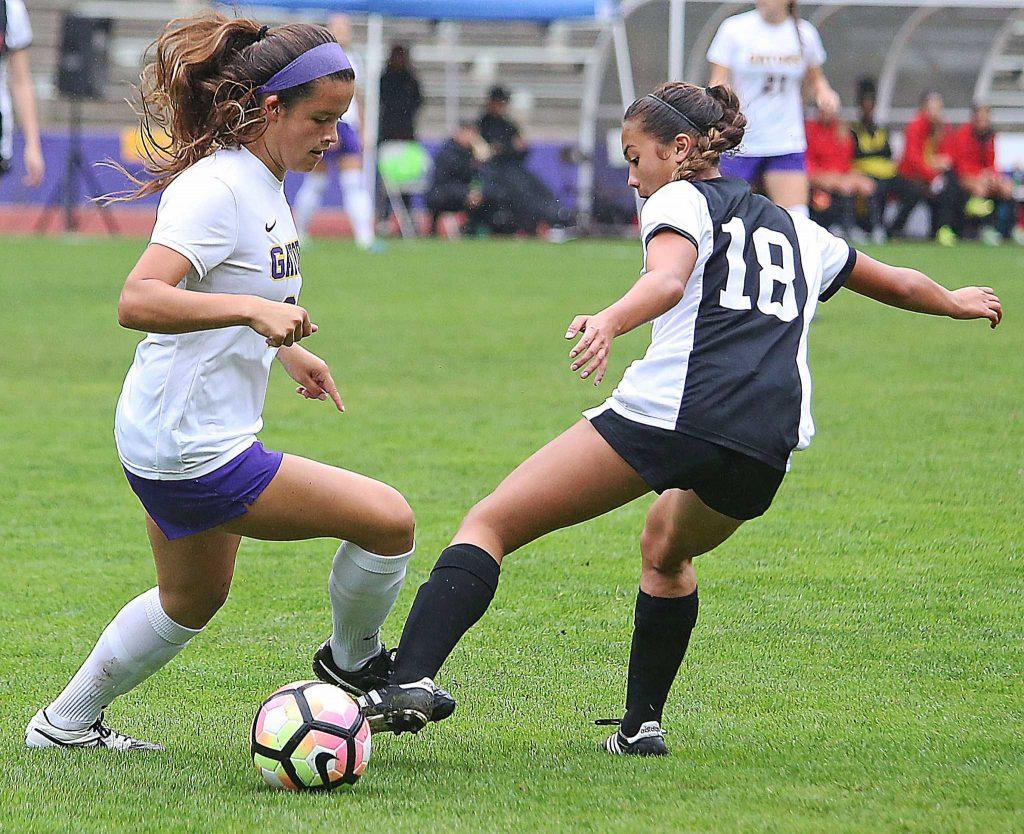 SF State Gators’ freshman defender Kelsey Wetzstein (24) battles for control of the ball during their 2-1 loss to the Cal State East Bay Pioneers at Cox Stadium on Thursday, Oct. 27, 2016.

After 100 minutes in a rainy, double overtime battle, Tia Sidtikun of Cal State East Bay capitalized on a late Gator error to score her second goal of the game to defeat SF State 2-1 at Cox Stadium on Thursday.

“We picked the wrong day to not show up,” said a visibly frustrated SF State head coach Tracy Hamm. “We had a better second half than the first, but I’m pretty disappointed in our effort.”

The Gators came out sluggish from the start of the game and CSUEB jumped out early, scoring in the 19th minute after midfielder Sidtikun connected on a cross from midfielder Jessey Santos to give them a 1-0 lead.

The match remained 1-0 until 10 minutes left in regulation, when Natasha Gosiaco scored on a corner kick from Kelsey Wetzstein to put the Gators on the board and send the game into overtime. The goal was Gosiaco’s fifth of the year which ties her for first on the team.

“We got energy when we found that goal at the end,” said forward Bianca Lowe. “But one little mistake can cost you the game.”

Neither side of the ball, offense or defense, played well, according to head coach Tracy Hamm, but she still felt SF State had opportunities to take the lead throughout the game and just couldn’t find the back of the net.

“When we attacked we didn’t finish the chances we had,” Hamm said. “And that’s really hard on you when you don’t capitalize early and let teams stay in games.”

34 seconds into the second overtime, Sidtikun of CSUEB broke loose, scoring her second goal of the game with an unassisted shot 20 yards out to seal the 2-1 upset win over the Gators.

CSUEB came into this game as the underdog ranked in second to last place in the CCAA, and SF State overlooked them.

“I think we had this mindset going into this game knowing this team is lower than us in points so we went in easy minded,” defender Kelsie Bozart said. “And you can never do that.”

The SF State coaching staff was worried about this issue prior to the game and tried to address it.

“Before the game we talked about coming out like a playoff team,” Hamm said. “But I don’t know if we put too much pressure on ourselves.”

Only the top six teams get invited to playoffs and with this lost the Gators are now 8-6-3, and 4-5-2 in CCAA which places them in eighth place.

SF State’s next game will be the last of the regular season as they try to keep their playoff hopes alive when they host Stanislaus State at home for senior night on Oct. 29. The Gators will be recognizing 14 seniors prior to the start of the match.