League of Filipino Students talk peace in the name of sovereignty 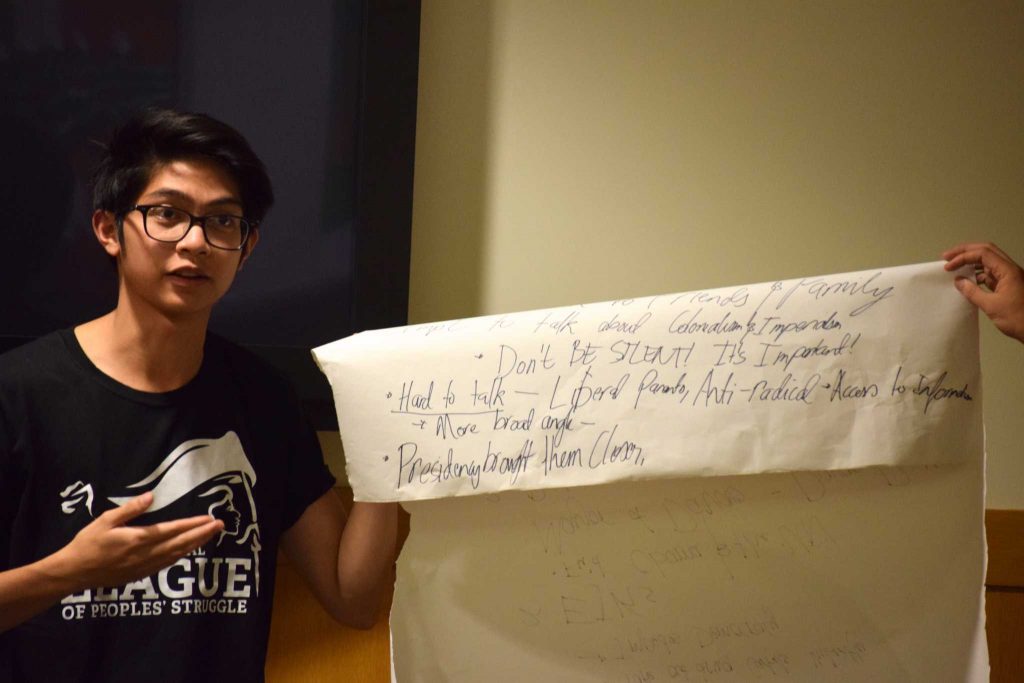 SF State student Raymond Jegillos holds up a poster with important topics put together by members of the League of Filipino Students during their peace talk forum in the Richard Oaks Multicultural Center in the Cesar Chavez Student Center on Thursday, October 20, 2016.

“It’s kind of weird, right now in the Philippines that the national sovereignty movement, where everybody is being really nationalistic, I feel like it’s actually affecting our international solidarity with other nations,” said Mackie Bella, a nursing student. “Our relationship with China right now and China’s attitude towards the rest of the world is kind of delicate.”

Bella said the Philippines should remain independent and that there should be no military bases in the Philippines. He said that while relations between China and the Phillipines are developing, he wished the latter would keep its national sovereignty.

Recent news coming out of the Philippines has been about the nation’s president, Rodrigo Duterte, and his comments against United State’s military bases stationed there. The same day the peace talks forum was being held, Duterte had just finished a conference in China where he announced his “separation from the United States.”

This comment was a talking point at the peace talks forum, but some students there who have personal ties to the Philippines felt that imperialism from the United States still persist because of its political and military influence.

The Philippines gained its independence from the U.S. on July 4, 1946, but five military bases were approved by the Pentagon last March, according to militarytimes.com.

“The amount of money they get from the relief aid and stuff like that doesn’t go to the pockets of the people,” said Noel Bulce, an international relations major. “Like that pork barrel scam, I was living in the Philippines at the time.”

The pork barrel scam was a Priority Development Assistance Fund scandal in 2013 that involved money grants to each member of the congress of the Philippines to be used for local development. Some of the investigations are still ongoing and it is being determined as to what extent the scam is attributed to those members of congress.

The current party in power has a government much like the U.S. government, with a judicial, executive and legislative branch. The government is recognized by the United Nations and other world powers, according to a powerpoint presented by bayanusa.org. Other solutions presented at the forum to help the country’s population in poverty –– which is at 26.3 percent, according to data by the Philippine Statistics Authority –– were to emphasize the need for national industrialization within the nation.

The powerpoint presentation also displayed the Comprehensive Agreement on Socio-Economic Reform, which is an agenda item that both GRP and NDF members are currently working on.

CASER provides diplomacy between feuding parties and allows discussion about the root causes of the armed conflict. It’s also a way that both sides can help the Philippine economy through transparency and accountability.

“At the moment, the Philippines is not nationally industrialized and that’s why there’s poverty,” said Raymond Jegillos, a biology major. “It isn’t in the interest of foreign capitalist to keep costs low.”