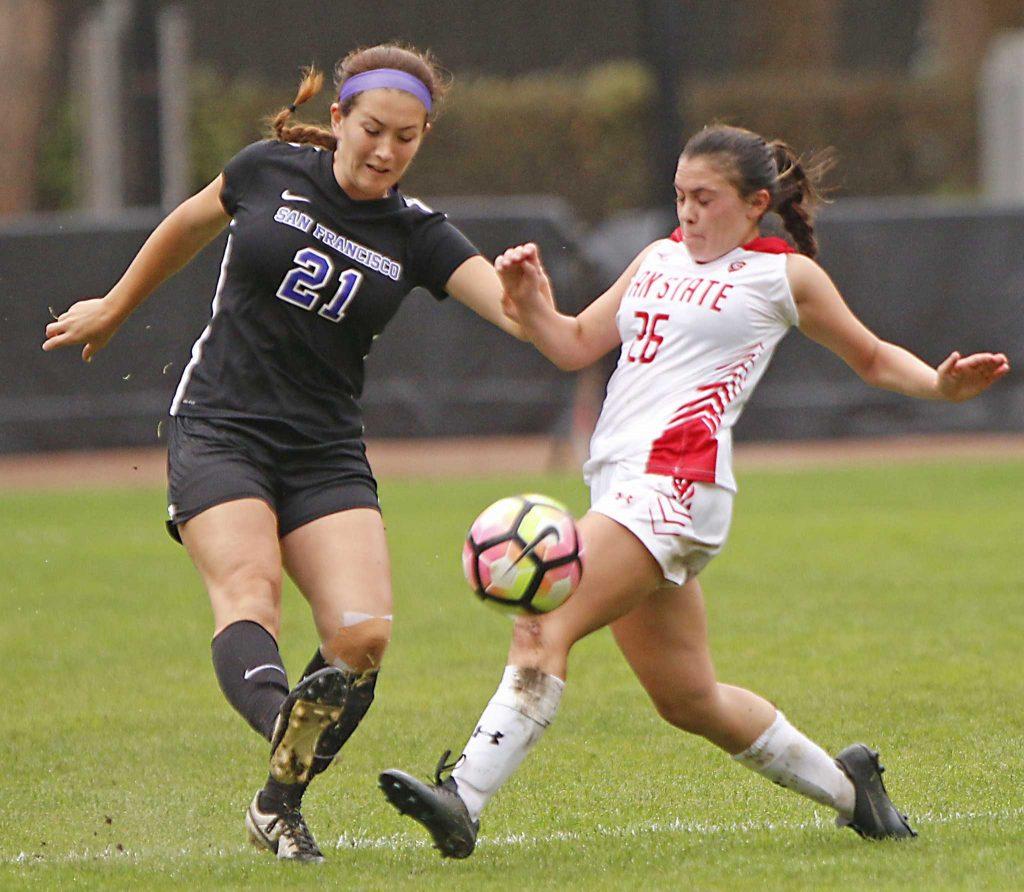 SF State’s women’s soccer team season and playoffs dreams came to an end with a heartbreaking 1-0 lost on senior day against the Stanislaus State Warriors Saturday afternoon at Cox Stadium.

“We played with a lot of heart and passion and did a lot of good things out there today,” said head coach Tracy Hamm. “It was a game that could have went either way, just unfortunately it didn’t go in our favor.”

SF State came into this game needing a win to secure a playoff spot and battled Stanislaus State all afternoon. The Gators had several key stops on defense to keep the Warriors off the board early, but were ultimately outshot 19-11 and 7-1 with shots on goal.

“We left everything out on the field for our team, seniors, fans, everyone,” said freshman defender Kelsie Bozart. “Our defense locked in all game but I guess we could have been a little quicker to the ball.”

At start of the second half Coach Hamm decided to start redshirt senior Alex Palomino allowing her to see the field one last time in her career. Palomino had recently announced her retirement due to a knee injury she’s been dealing with for two seasons.

“Coach Tracy gave me the chance to have my moment,” Palomino said. “It was a great feeling, I been out for almost two years with my knee and it has been so hard for me to walk away so this was special.”

The game remained scoreless throughout 88 minutes until Stanislaus State midfielder Gabriela Vargas got behind SF State’s defense causing goalie Christina Holguin to hesitate and come up the line allowing Vargas the angle to capitalize to put her team up 1-0 to seal the win.

“We put ourselves in this situation and it’s really frustrating being a senior,” said Palomino. “It’s really hard to see this as the end of the road for us. We’re heartbroken as a team.”

The Gators honored 14 seniors prior to the start of the game, and while this loss marks the end of the chapter to those seniors’ collegiate careers, Coach Hamm said they’re leaving the program going in a new direction.

“These seniors had a lot of leadership and they will leave this program with a lot of tradition,” Hamm said. “The younger players now know what the level is like and what they need to bring every game.”