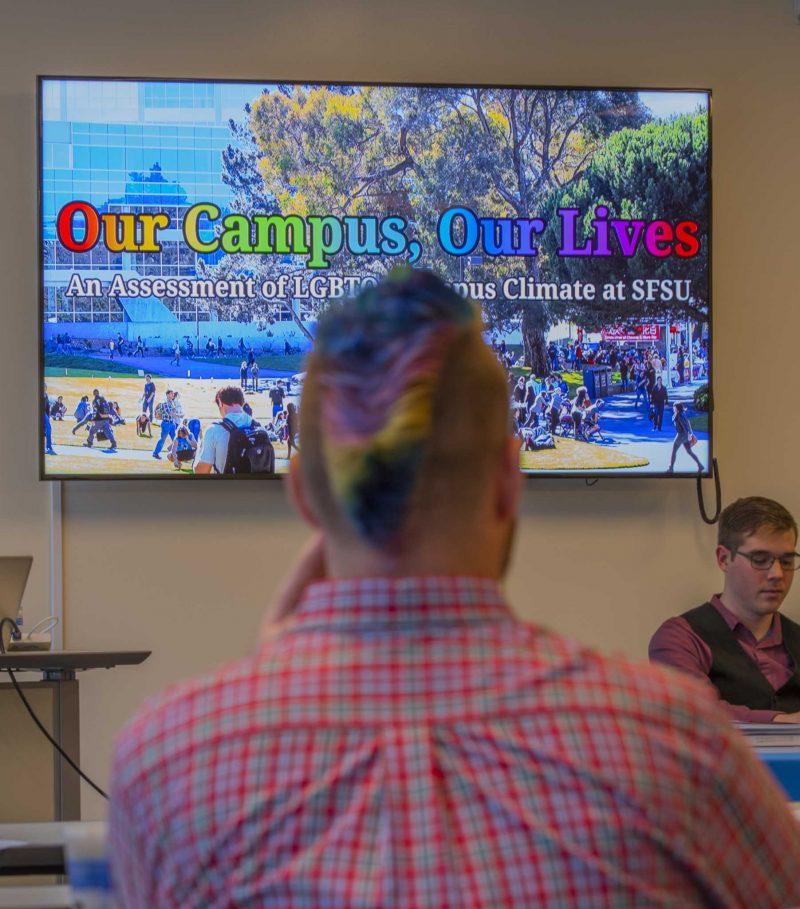 CORRECTION: An earlier version of this story had misspellings of the names “Darius Bost” and “Colleen Hoff.” Additionally, the acronym “CREGS” was missing an “S” at the end.

Students, staff and faculty will submit a letter to SF State administration addressing concerns about the campus climate toward LGBTQ+ students and recommendations on how to work toward resolving these issues.

The plan for the letter emerged after former graduate student Justin Boese presented the findings of his research thesis, “Our Campus, Our Lives,” to a group of about 18 students, staff and faculty on Oct. 25 in an event hosted by the University’s Center for Research and Education on Gender and Sexuality.

For the event, CREGS brought together a panel of staff and faculty that are involved in assisting and supporting LGBTQ+ students on campus. The panel consisted of Director of the Queer and Trans Resource Center Rumaldo Godinez, Interim Associate Vice President & Dean of Students Mary Ann Begley, and other staff and faculty involved in assisting LGBTQ+ students.

Boese’s research focused on how LGBTQ+ students perceive and experience the University’s campus climate and how SF State can improve on addressing the needs of this community.

As part of the SF State community for seven years, Boese received his bachelor’s degree in health education and his masters degree in sexuality studies.

“My motivation for doing this research came in part from my own experiences at SF State,” Boese said. “I was curious to see what the experiences of other LGBTQ students were.”

Boese conducted his research through an online survey with 136 LGBTQ+ students and then interviewed five of the participants to learn more about their experiences as members of the SF State community.

The survey’s results found that only 49 percent rated the campus as accepting for trans men, 46 percent for gender nonconforming or non-binary people, and 44 percent for trans women.

58 percent of the surveyed students found that it was “very likely” or “somewhat likely” for gender nonconforming or non-binary people to experience harassment or discrimination at SF State. Trans women, trans men and LGBTQ+ people of color also had similar responses with 53 percent, 43 percent and 42 percent respectively.

Godinez added that many students come into the QTRC looking for specific services and are disappointed to find out they’re not offered at SF State.

Tyler Cota, a sociology major, shared the same sentiments about deciding to enroll at SF State as a trans man.

“I didn’t think there would be so much stigma around being trans or that I wouldn’t have to try and maneuver through a system that’s based on heteronormative academia,” Cota said.

According to Begley, many services aren’t offered on campus because they are typically provided in community resource centers across the city.

“We as an institution have been very complacent about offering specific services and programs on campus because we’re in San Francisco,” Begley said.

Based on the data, Boese created a list of recommendations for the University, including conducting a regular comprehensive campus climate assessment, expanding the number and access to gender-neutral restrooms and hiring a professional staff to support LGBTQ+ students.

The goal of hiring full-time professionals for LGBTQ+ students is that they can better assist students in finding appropriate services on and off-campus, as well as helping to resolve issues involving discrimination and harassment.

Darius Bost, assistant professor of sexuality studies, shared his concerns over LGBTQ+ students of color having to deal with multiple layers of discrimination.

“I’m very alarmed that 56 percent of LGBT students of color don’t feel accepted because they’re negotiating their sexual and racial identity at once,” said Bost to the panel.

Begley believes the University needs to have more conversations about intersectionality. She suggested setting up times to discuss the issues of LGBTQ+ people of color and then coming up with ideas to provide spaces for these students.

CREGS will write the letter to President Leslie Wong listing all the issues and solutions that were brought up at the event with the hope that plans for solutions can be set in place.

“SF State should be a leader, and not only are we not a leader, we’re behind,” Hoff said.