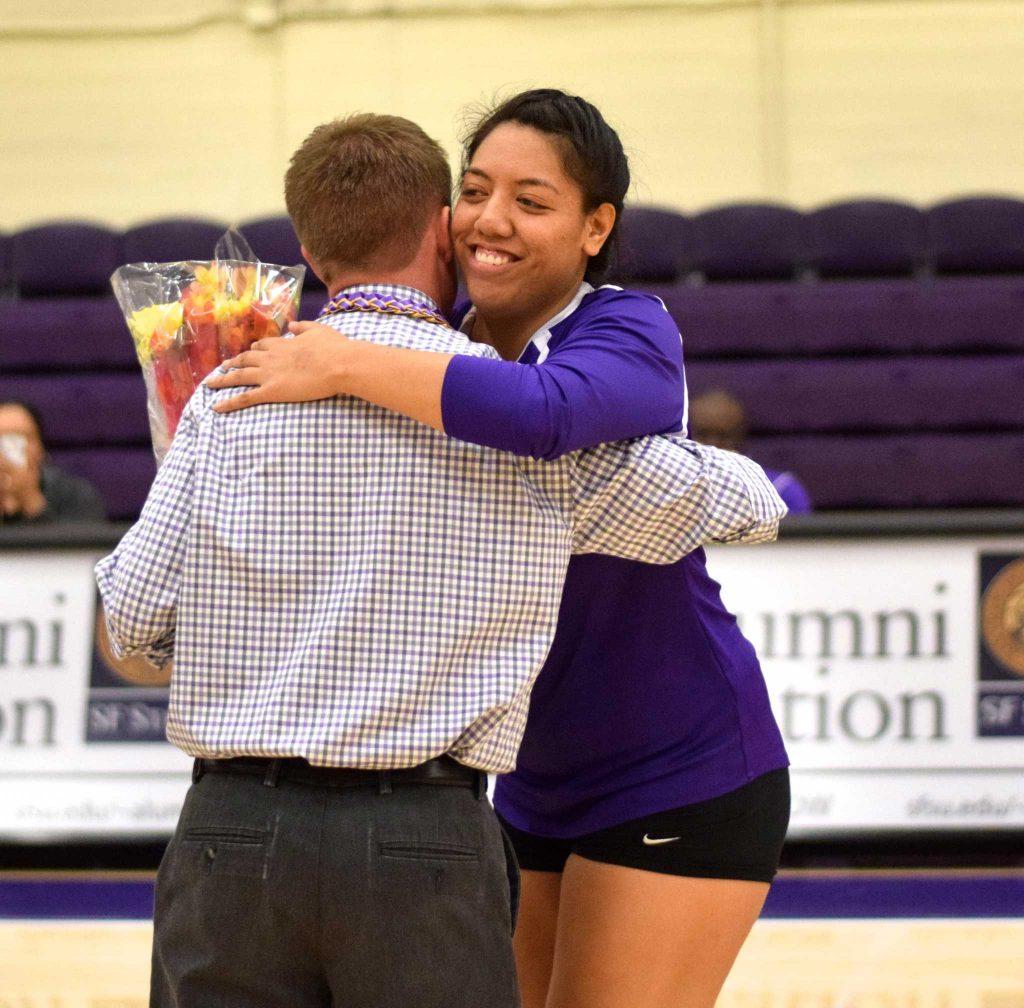 Escorted by their families and friends onto the court before Friday night’s game, three SF State seniors gifted with bouquets and introduced for the last time at The Swamp.

Linda Aerne, Rachel Stoerkel and Malia Muin’s final home game with the Gators ended with a sweep by the Humboldt State Lumberjacks.

Although the team failed to secure a win, the seniors said they intend to treasure every moment they have together, on and off the field.

“It’s crazy, my college career is over and I’m not going to play with this team anymore,” Aerne said. “I’ll miss game day. We spend the whole day together and it’s always super fun.”

Muin said it was certainly an emotional night for her. The thing she’ll miss most about her playing career at SF State is her teammates.

“Tonight there was tons of adrenaline, happiness and overall excitement for me and my team,” Muin said. “I will always miss the laughs and happiness my teammates brought out of me.

Head Coach Matt Hoffman said he is proud of how his seniors handled the moment and immediately changed their focus to the game.

“You hope that you can go through the ceremony and still be mentally ready to play,” Hoffman said.

The Gators battled in a competitive first two sets against the Lumberjacks. Both teams exchanged back and forth rallies which forced each coach to called quick timeouts. The Lumberjacks made the last rally in both sets, winning by slim margins and convincingly closed out the final set 25-15.

“We competed in most part of the game today, which we haven’t done in past matches,” Hoffman said. “Our serving and passing was better than it’s been in recent matches but we just committed too many errors tonight.”

Aerne had a solid performance, she finished with 12 assists and four digs. Muin added 10 assists and nine digs.

“Some of my teammates were really stepping up and wanted to fight hard for our seniors,” Aerne said. “I really appreciated that.”

The Gators have two games remaining in the season both on the road. They face off at Cal Poly Pomona on Nov. 11 and the seniors will don Gators uniform for the final time against top ranked Cal State San Bernardino on Nov 12.

“What I will miss the most about our seniors is that they all lead in their own ways. I’ll miss their leadership. They set the bar for the younger girls on how hard to work in practice,” Hoffman said. “They stayed positive throughout despite not winning.”