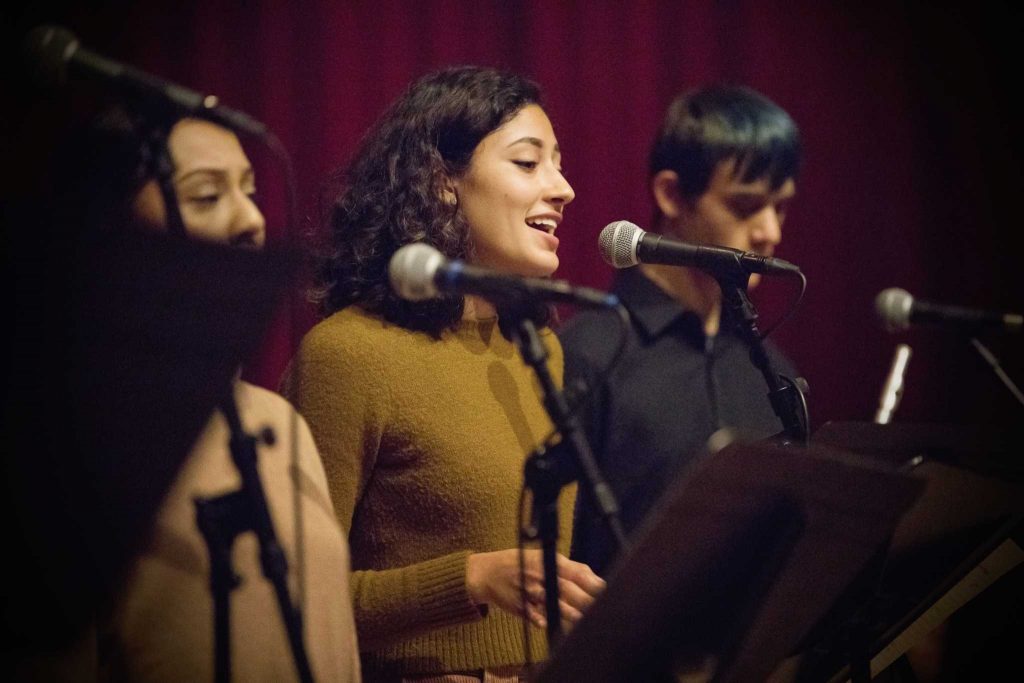 After technical difficulties delayed the start of the recital, SF State’s Afro-Cuban jazz ensemble smoothly transitioned from microphone checks to a vibrant, exciting performance that energized the audience in Knuth Hall in late October.

John Calloway, music lecturer and director of the 20-student ensemble, conducted the performance while playing the guiro, a handheld Latin American percussion instrument.

Calloway founded the ensemble 17 years ago as a graduate student but has been playing this type of music his whole life.

“There was a lack of ensembles that played Latino music and I wanted to pass this music onto the other generations,” Calloway said.

The ensemble creates and performs their own arrangements each semester. The songs are a fusion of traditional and contemporary Afro-Cuban music based on orchestral jazz,  religion and folklore from the culture. The performers played a variety of instruments, ranging from familiar jazz instruments like saxophones, drums and standing bass to more specialized instruments, such as congas and timbales.

In addition to the instrumentation, the vocals played an important role in the performance. One song relied entirely on vocals, with minimal percussion instruments, allowing the audience to fully experience the soulful, Spanish lyrics.

Miranda Orellane, an apparel design and merchandising major, is a vocalist in the ensemble and grew up listening to a lot of salsa and cumbia music, a genre popular throughout Latin America. Because the genres are different from Afro-Cuban jazz, she found the vocal stylings of this ensemble hard to get accustomed to.

“It wasn’t familiar,” Orellane said. “It’s not the music I grew up with, so the beats were totally foreign to me.”

Despite its unfamiliarity, Orellane says she fell in love with the music.

“It’s very beautiful,” Orellane said. “It’s mostly dance songs. It’s very energetic and it gets the crowd invested. Everyone in the ensemble is pretty advanced, but they’re all very sweet people who made me feel immediately welcome.”

The performance drew a large, vibrant crowd to Knuth Hall. One of the students in attendance, Jessica Monroy, came to see her roommate perform in the ensemble.

“I love this type of music,” Monroy said. “I really wanted to dance though, it’s super fun to dance to.”