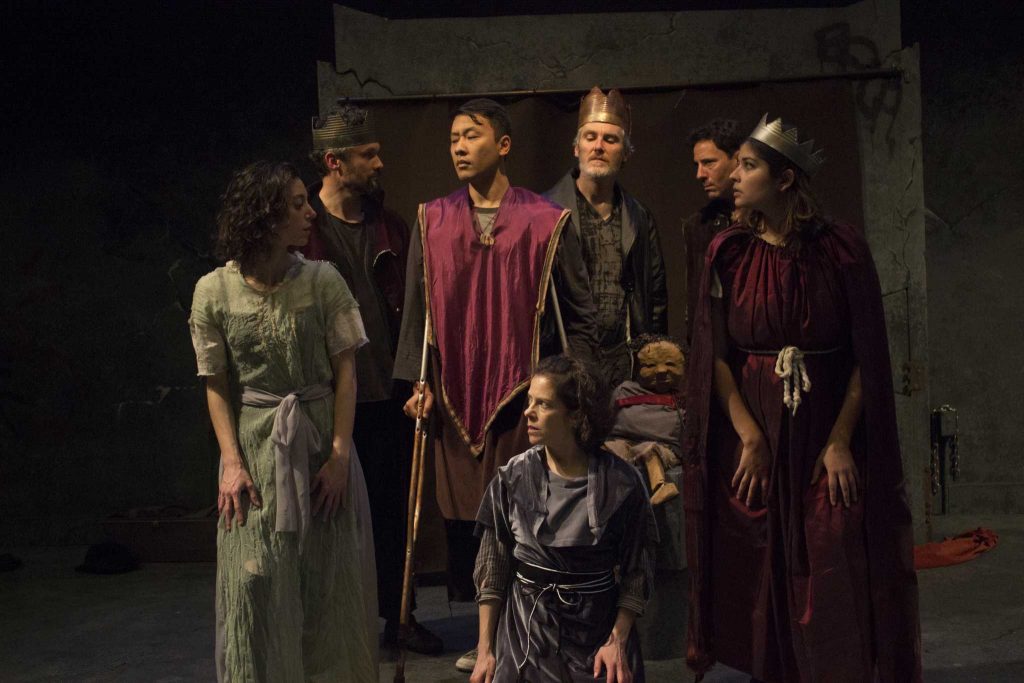 In a darkened room of The Flight Deck theater in Oakland, actors entered the stage speaking multiple languages while moving around a post-apocalyptic set filled with debris and rubble.

This twist on Shakespeare’s “The Winter’s Tale,” was performed on the last Sunday evening in October by the Ragged Wing Ensemble and adapted by SF State’s theater arts professor, Bill Peters.

The director of the play, Keith Davis, described the show as a “pared down, muscular vision” of “The Winter’s Tale.” The show is not a direct reenactment of Shakespeare’s story but rather an adaptation. It’s told through the context of a group of refugee children from around the world who gather in an abandoned location and act out Shakespeare’s classic to find solace from the outside world.

In an unconventional twist, the actors created their own music for the performance, using post-apocalyptic set props as musical instruments.

“I had our sound designer bring in a bunch of props because I wanted to make everything accessible in this space as if the whole story takes place in this burnt out garage,” Davis said.

Because of the extensive length of the original Shakespearean text, adaptations were made by Peters to assure the play was performed under a few hours and presented in a way that still made cohesive sense.

“You’re losing a heart or a lung here, it’s not a minor operation,” Peters said. “You begin kind of stitching things together, maybe putting things slightly out of sequence, maybe assigning part of a speech to another character and gradually try to make those cuts seamless so that the story keeps developing.”

“The Winter’s Tale” is sometimes described as a “problem play” because it is neither a tragedy nor a comedy.

“It’s all about truth, reconciliation, redemption and seeing hope in the midst of something that at first glance seems totally hopeless,” Peters said.

Peters teaches acting, directing, playwriting and Shakespeare in performance at SF State, and in addition to adapting the original text for this production, he also served as the Shakespeare consultant to help the actors examine Shakespeare’s work critically.

“All of the work I do with Shakespeare is intended to find ways of realizing his work on stage and make it connect with actors,” Peters said.

Akaina Ghosh plays the role of Hermione in “The Winter’s Tale,” and believes Peters’ work helps the actors critically examine the text.

“Shakespeare is tough linguistically. It’s tough to understand. I think a lot of young people find it inaccessible,” Ghosh said. “I think one of the challenges of performing a Shakespeare play is how we can make this engaging to any viewer, regardless of age or their understanding of Shakespeare. People in the cast have varying experience with Shakespeare, but working with Bill and getting his insight into the text was incredibly helpful as an actor.”

Peters believes that getting young people interested in Shakespeare lies in emphasizing the human elements in his stories.

“For young people today, the assumption is that Shakespeare is beyond their reach, that it’s on a cultural pedestal that has very little to do with their own lives and their own ability to comprehend what he’s all about,” Peters said. “The actual truth is that he’s very much understandable if you can rehearse it. That releases all of these very human things in his work.”

Davis agreed with this emphasis on performance of Shakespeare’s work in order to comprehend it.

Ghosh also said that using theater to bring these stories to life can offer people a sense of connection in today’s world.

“Theater allows us to feel in ways that are often discouraged or ignored by modern society,” Ghosh said. “For younger people, it allows them to feel more human than they might, especially in an age where technology is so prevalent and can create so much separation between people. I think theater brings people together in a really beautiful, immediate way.”

The importance of bringing theater into our communities is something that Peters stresses both as a consultant and as a professor.

“Shakespeare was a community theater playwright. People from the neighborhood flocked to see his shows,” explained Peters. “What we do at the University is try to get people back out into the community and get involved.”

“The Winter’s Tale” runs at the Flight Deck in Oakland until Nov. 12. Students can get a $10 discount by using the code “student” online or by showing their student ID.