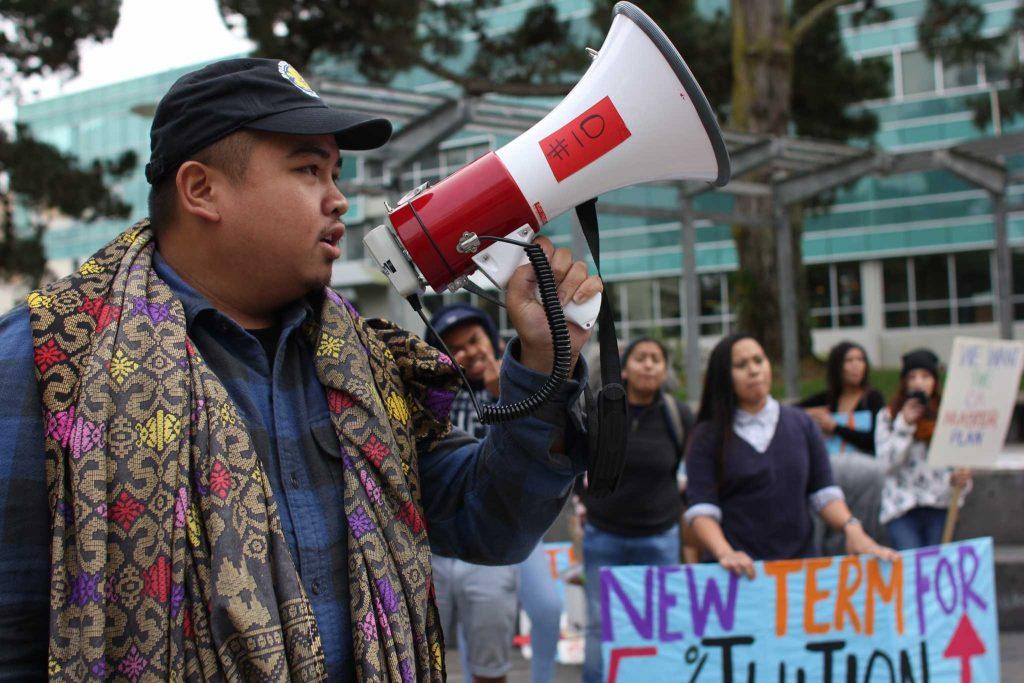 SF State political science major Pat Racello speaks to the students through a megaphone about the 5 percent tuition increase in Malcolm X Plaza on Tuesday, Nov. 15, 2016.

A group of more than 30 students formed a circle at Malcolm X Plaza on Tuesday and shared the microphone and expressed concerns and poetry in protest of a possible five percent tuition increase.

Students were notified about the CSU-wide tuition hike, effective fall 2017, by a campus-wide email from Associated Students Inc. last week. The email explained that the state of California neglected its responsibility to fund public higher education, resulting in funds being short $168.8 million for the 2017-2018 academic year.

Biology student, Yeseenia Mendeze, who read excerpts from the poem “Let America be America Again” by Langston Hughes, explained why the students had gathered.

“We can’t continue studying here at SF State or at any CSU schools if our tuition is too high, you know if we can’t afford it, so that’s why we’re here. We’re actually standing up so we can fight against that; fight against the increase in tuition,” Mendeze said.

The ASI email linked to the information on the proposed increase and cuts to services if the full funding from the state is not given. In the proposition, Chancellor Timothy White stated that he hopes assistance from the affected groups can help avoid the painful step of tuition increase and that the Chancellor’s Office will “continue to explore every option to keep costs low for our students and their families.”

The possibility of a tuition hike was first raised by the CSU in September, prompting meetings with the California State Student Association and other affected groups.

The CSU has two funding sources: the state general fund, provided by the state legislature and governor, and systemwide tuition, paid by students and their families. Every year, the CSU requests adequate funding from the state as part of the budget cycle.

“Even though the state has started to reinvest in the CSU, state funding for the CSU is still below pre-recession levels by $135 million, even as the university serves an additional 41,500 students. As of right now, there is a $167.7 million gap between the CSU’s preliminary budget plan for 2017-18 and the state’s funding plan,” said Elizabeth Chapin, Manager of public affairs at the CSU Office of the Chancellor in an email.

Chapin said that if the state does not fund the gap, the CSU may need to consider options such as reducing programs and services or an increase in tuition.

SF State’s ASI Vice President of External Affairs Celia LoBuono Gonzalez said she is working to help avoid the increase and encourages students to voice their oppositions on the matter.

“In my opinion, you have to look at the context of where we’re living. There are so many other external factors right now that makes it challenging for students to even accomplish finishing school, even if the institution had all the things in place for you to graduate in four years,” Gonzalez said. “There are a lot of other factors that I personally don’t think the state of California and the governor are taking into account.”

Gonzalez feels that since San Francisco is going through a housing crisis that students who are affected by fast-rising rents should be considered if this tuition increase comes into play.

University Spokesperson Jonathan Morales said SF State knows that college affordability is one of the top concerns of students and helping to reduce the cost of attendance is one of the school’s top priorities.

“College affordability is an issue that touches not just our campus but campuses throughout the nation. We empathize with our students and are committed to doing all that we can to help reduce the cost of college. We will also continue to advocate at the state level for full funding for the CSU,” Morales said in an email.