Gators’ aggressive second half propels them for first win of season 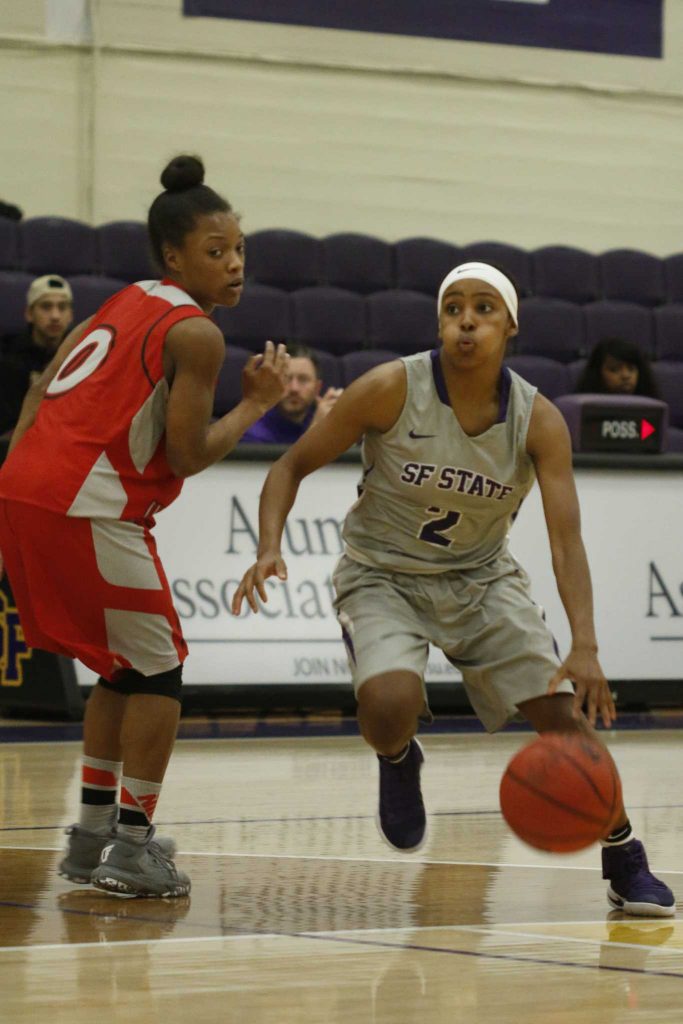 Women’s basketball bounced back from two tough road losses to start the season with an impressive 66-58 victory against Holy Names University in their first game at The Swamp.

Head coach Dennis Cox said he is pleased to get the first win of the 2016-17 season out of the way.

“It feels great!” Cox said. “It was a tough week in Oregon. There were two games we were capable of winning but we just got out physicaled, especially in the post, so it was nice to start playing tougher.”

In the first quarter, the Gators trailed by as many as six points. They picked up their defensive intensity in the second quarter and outscored the Hawks 13-8 in the period and ended the half with a one point lead despite being outrebounded 21-8.

“We were just not rebounding offensively and defensively.  Four or five of them were in the last five minute of the first half and how we were up a point at the half, I don’t know,” Cox said. “I told them after the game, it wasn’t anything I did, except challenge them. I basically told them, at the end of the day, it’s you versus the person that you’re guarding.”

According to Cox, the Gators began the second half playing more physical. They cranked up their aggressiveness in the paint and managed to grab more rebounds in the third quarter alone than they had all in the first half. The Gators finished the game with 31 rebounds with 23 coming in the second half.

“I thought we came out as the more aggressive team in the second half and a lot of that was thanks to Kayla Watterson and Lauryn Catching,” Cox said. “It was really good to see them to set the tone for us tonight.”

Watterson had a team-high eight rebounds and said the Gators were determined to play well in their first home game after a disappointing 0-2 start to their season.

“I’m very proud of our team,” Watterson said. “We came off two rough game in Oregon, so coming back home we knew it was very important for us to start our season off with a win at home.”

Lauryn Catching had one the best individual games of the season for the Gators. She finished with a career- high 24 points, three assists, three blocks, five rebounds.

“I just knew that I had to come out and play since I had a hard weekend in Oregon,” Catching said. “I knew I had to be the player that the coaches wanted me to be so I was that today.”

The Gators hope to improve their 1-2 record as they continue their homestand against University of California, Merced on Nov. 18.