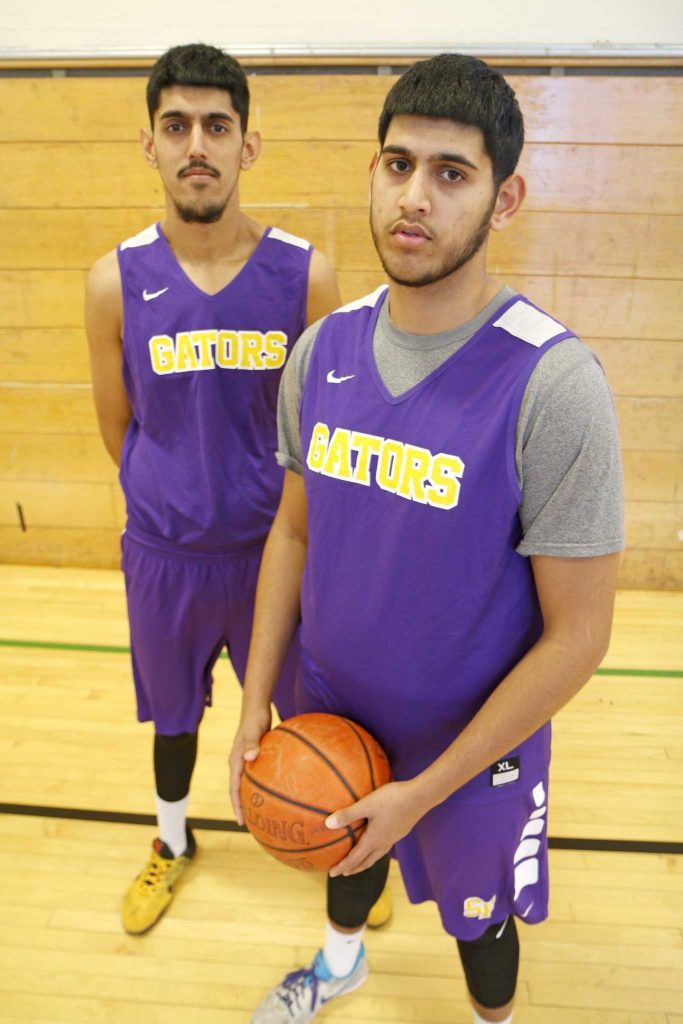 SF State Gator men’s basketball players AJ and Jash Kahlon pose for a portrait in the practice GYM on Tuesday, Nov. 29, 2016. This season will make the first time the Kahlon brothers have played together.

For the first time in their lives, brothers AJ and Jash Kahlon stepped onto the court together in the first game of the season earlier this month, playing as teammates on SF State men’s basketball team.

“It’s a once in a lifetime thing,” Jash said. “Basketball is not going to be forever, but these are the type of memories you make together that make it all pretty cool.”

AJ, the older brother, stands at 6 foot 11 inches (2 inches taller than Jash) and describes his younger self as being far from a jock. Growing up in Stockton, he spent most of his time reading books and playing video games –– Sports were the least of his interests.

Height has never been a problem for AJ, but he had a decision-changing growth spurt during his sophomore year of high school that he says altered the course of his life.

“I grew from 6 foot 3 inches to 6 foot 7 inches so that’s when I decided to give basketball a shot,” AJ said. ”It was hard early on. I didn’t have the footwork or coordination so it was rough for me for my first three years playing basketball, but once my body and muscles started developing it started to get easier.”

Jash’s path to basketball was the complete opposite. He has been playing basketball since he was a young boy, and was often considered  the “better” brother when it came to the sport.

“When we were younger AJ wasn’t as good as he is now, I was the better brother,” Jash said with a laugh. “He’s grown a lot over the years as you can tell, it’s pretty cool to watch.”

The Kahlons are a sports family. Both of their parents are from India and are former athletes themselves. Their father stands at 6 foot 6 inches tall and played for the national basketball team during the early ‘80s. Their mother, who is considered the short one, stands at 5 foot 11 inches and was a field hockey player in India.

Jash credits his head-start on AJ to his father.

“He used to push me hard when I was younger since AJ wasn’t into basketball, so he would push me,” Jash said. “He had a lot of footwork and he taught that to me. He taught me a lot of my moves. He’s still watching and pushing us.”

AJ graduated from high school and went to play one season for San Joaquin Delta College, a community college in Stockton, before he transferred to SF State, where he’s currently in his third season with the team.

Jash won a league championship his senior year of high school after transferring to a different school. Once he graduated, he decided to go to City College of San Francisco for two seasons, then transferred to SF State where he  finally got a chance to play with his older brother.

“It was really one of the recruiting pitches that brought me over to SF State,” Jash said. “It’s something not a lot of people get a chance to do.”

After watching them both on the same team, SF State head coach Paul Trevor describes them as completely different players on the court.

“We always joke around if we could merge them, together we would have a pro player,” Trevor said. “They’re really different. When AJ first came to us he was a long athletic player who could rebound and block shots and impact the game defensively, Jash came in being able to shoot and score, he’s really skilled. They would make the perfect player; great defender and skilled scorer.”

AJ is currently off to a hot start to his senior season, averaging 13.7 points, 11.8 rebounds and three blocks per game. His quick start has been recognized as he has been named the HERO Sports D2 Men’s Basketball Hero of the Week on Nov. 25 and the CCAA Player of the Week for Nov. 14-20. He hopes this season continues to go well and can open up more opportunities in life for him.

Off the court, he’s majoring in biology and has aspirations to one day attend dental school.

“I came here to get my degree, that’s goal number one, but I don’t know where the season is going to take me and what opportunities await,” AJ said.

As for Jash, he is majoring in international relations and ultimately wants to attend law school. For now, he is focusing on winning this season.

“I just want to contribute to this team however I can; it’s a good team, Jash said. “ I just want to keep getting better and be a leader of the team next year.”