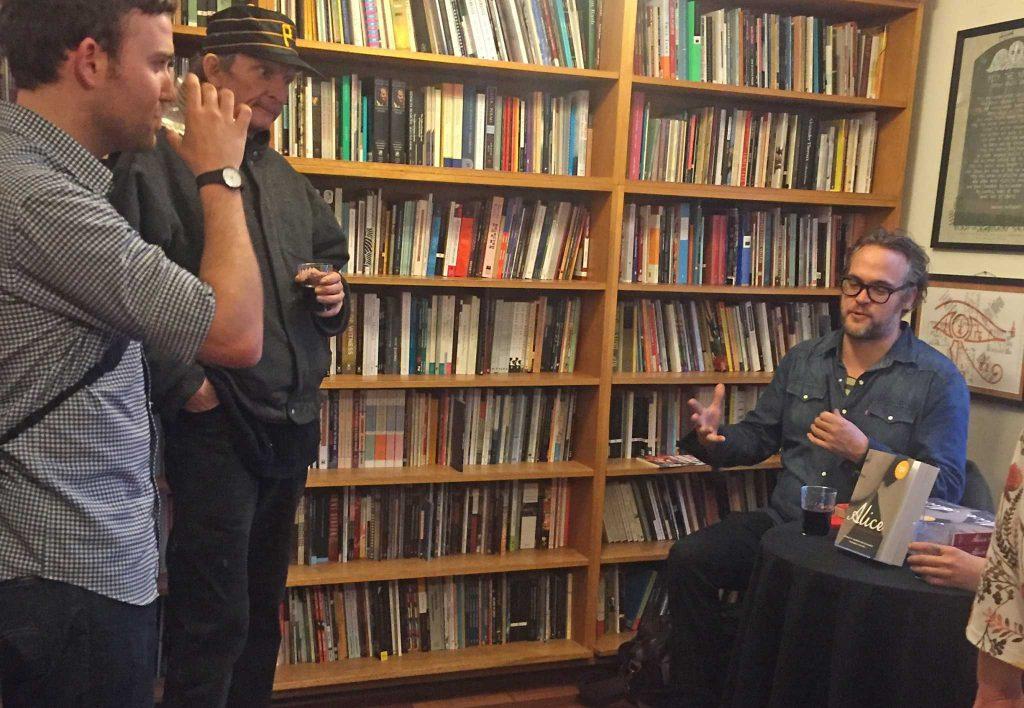 Campbell Mackenzie, 28, and Mark Collins, 57, listen to Devon Angus speak about the book he edited "Alice:Memoirs of a Barbary Coast Prostitute" at City Lights Bookstore in San Francisco on Saturday, Nov. 19, 2016. Angus is an SF State alumnus. (Jacqueline Haudek/Xpress)

While researching San Francisco historical figures, SF State alumni, Devon Angus and Ivy Anderson, discovered something that caught their eye: a collection of letters written by a prostitute named Alice working in San Francisco at the turn of the century. The letters were written to the San Francisco Bulletin, a newspaper which was known for featuring voices from the underworld and the fringes of society.

“Alice’s story and the stories that were contained in the letters that were written to the newspaper were so fascinating that we both immediately realized it was a project that we had to continue working on to try to bring to light,” Anderson said.

Out of their fascination came “Alice: Memoirs of A Barbary Coast Prostitute.” The book is a collection of Alice’s stories which were serialized by the paper along with letters that other sex workers wrote to the paper in response.

Angus and Anderson, who majored in history and environmental studies respectively, wanted to collect and republish Alice’s stories because they felt many of the sentiments expressed by Alice a hundred years ago are still relevant today. Angus and Anderson transcribed Alice’s memoirs by hand, which is located in the San Francisco Bulletin and kept on microfilm at the San Francisco public library, a process that took four years. “We couldn’t afford to hire a transcriber, so it was a labor of love,” Angus said. Angus was pursuing a master’s in history at SF State before he realized how much time this project would need.

“I ended up not finishing my master’s degree because I just couldn’t do the two at the same time. So, I became wrapped up in doing this. Mainly, I’m fascinated with these ideas of lost histories,” Angus said.

The Barbary Coast (now the Chinatown and North Beach neighborhoods of San Francisco) was a “vice” district, known for drinking, gambling and prostitution at the turn of the century. In 1913, a red-light abatement act aimed to shut down all brothels in California. Many newspapers at the time were taking political stances on the abatement act, but voices from actual sex workers in the newspaper were rare.

Angus and Anderson believe this is also the case today and mentioned the proposal last year by Amnesty International to decriminalize prostitution which caused a media backlash that included many famous names speaking out against decriminalization, such as Meryl Streep and Lena Dunham, but lacked opinions from actual sex workers.

“Their voices were being dismissed and ignored before 1913 and they still are today, and the women are making the same demands, which is essentially to allow them a seat at the table when making policies that are going to affect their lives and their livelihoods,” Anderson said.

Angus and Anderson led a walking tour in November from Market Street to City Lights bookstore to show the areas of the former Barbary Coast from the early 1900s when Alice’s story took place.

“By giving a walking tour, you’re able to engage people tangibly within the space where these stories were happening,” Anderson said.  “I think it has a different psychological effect on people to walk around the space in which they live and are engaging in and to notice and realize that clues about this history still exist in certain places.”

Campbell Mackenzie, a 28-year-old Australian tourist decided on this tour over others in the city because of the unique perspective it offered.

“There’s so much of Alice’s story that is still resonating today with the sex workers of the current times and the feminist movements of today,” Mackenzie said. “All of these same problems that she was living through and that were going on then are still happening today and we haven’t had the reforms that we probably should have had to help these people out.”

Anderson hopes that others will become inspired to take up research projects of their own.

“Devon and I were actually just dorks who decided to look in some old newspapers and found a story that came to us and presented itself as being important,” Anderson said. “I hope that our story as being these amateur researchers that have now brought this thing of importance to light inspires other people to look into the histories of their places and their interests.”