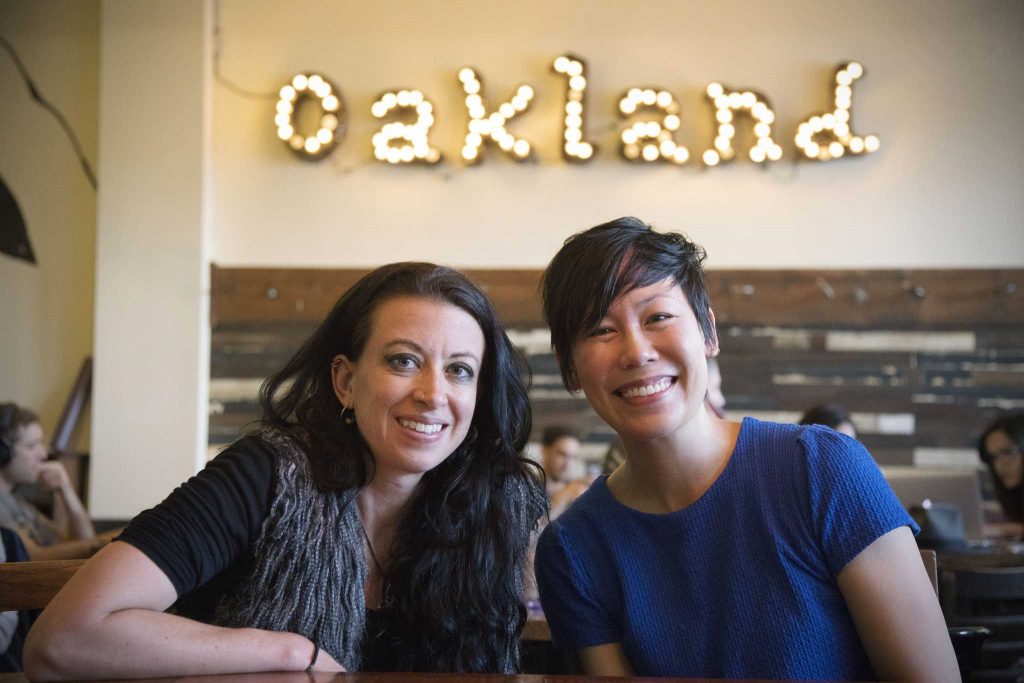 Co-founders of The Escapery, Carson Beker (left) and Nancy Au (right) pose for a portrait at Arbor Cafe in Oakland, Calif. on Sunday, Nov. 20, 2016. The Escapery hosts creative writing workshops at cafes and other community spaces in San Francisco and Oakland. (Steven Ho/Xpress)

Correction: An earlier version of this article misspelled Kimberly Gomes’ last name as Gomez, but it has been corrected.

Two creative writing grad students have branched off from SF State to form their own space for interactive writing workshops.

Created by Carson Beker and Nancy Au, The Escapery is a collective of teachers from around the Bay Area that encourage creativity and play, while also allowing a place for writers to find community and work on improving their writing.

The workshops, which are held in cafes in both San Francisco and Oakland, are open to everyone including those who have no background in creative writing. On their website, The Escapery describes itself as “your writing unschool,” railing against the intimidating structure that can be found in many traditional writing schools.

“I think the unschool for me is letting emerging writers know that this space is a safe space. It’s a place where you can explore and have fun with writing and learn about what people are doing and figure out what’s interesting to you,” said Au, who is currently pursuing her MFA in creative writing at SF State. “The structure of being in school can be intimidating. It has grades, it has papers, etc. In workshop, you can take field trips on a whim, you can go to the park and do chalk drawings on the ground.”

Beker, who has already received an MFA in creative writing from SF State, agreed that this free-spirited attitude is part of what makes The Escapery unique.

The writing workshops include free-writes, critiques of works-in-progress by other students and creative elements such as drawing, cut-ups, poetry exercises and acting games. The Escapery also hosts day-long and week-long writing boot camps to delve into a writing topic, such as fairy tales or horror.

“Notebooks are required at all of my classes,” Au said. “When you say in class we’re going to be working with our hands, it does something different. It’s unpolished, it’s messy and the self-editor that comes into your head is less when you can cross stuff out and you can draw and make a mess.”

Beker defines her teaching style in a similar way.

“One thing I learned from being at The Escapery is that you can’t teach inauthentically. You have to be yourself times 100. My teaching style is awkward, messy, playful, disheveled,” Beker said.

Au mentions that The Escapery is a place for “both emerging writers and emerging teachers.” Both Au and Beker first taught an introduction to creative writing class at SF State before teaching at The Escapery.

“It was a gift. It’s so great to be in a room where the most important thing is your imagination and everyone else’s imaginations and writing and storytelling and writing. There’s nothing better that that,” Beker said about the experience.

Kimberly Gomes is currently pursuing her creative writing MFA at SF State and has attended Beker’s classes at The Escapery.

“Her classes were filled with incredibly inventive, rapid-fire exercises that helped me come up with all kinds of lines and story beginnings before my mind had time to question itself. I feel like Carson is brimming with creativity and this open-armed capacity to encourage people to write, write, write. It was very liberating,” Gomes said in an email.

Gomes mentioned that the workshops helped boost her confidence as a writer.

“I applied for MFA programs at the tail end of my class with Carson and submitted the stories I created in her class. I’m still really grateful for how that class affected my writing life,” Gomes said.

Au says that the supportive atmosphere at SF State is what drew her to the creative writing program in the first place.

“From what I’ve heard about other programs, the workshop experience and the community building experience is limited to how much can you shut someone else down to lift yourself up and what I’ve experienced at State is you lift everyone up and then everyone comes up with you,” Au said.

This community environment that Au and Beker found at SF State is something they hope to replicate at The Escapery cafe workshops.

“Once you leave school, it’s important to keep going and fostering a sense of community because writing can be really solitary,” Au said. “Being isolated is not great for art. The world is so much bigger and so much more complex and terrifying.”

More information on The Escapery workshops and mission can be found at https://escapery.org/.