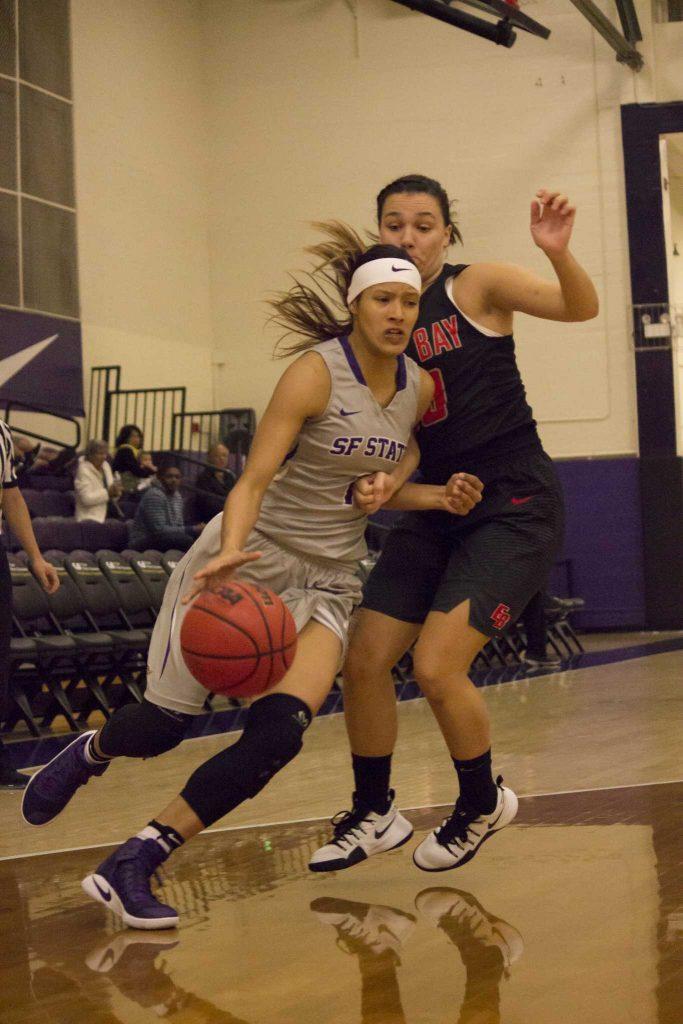 SF State Gators’ junior guard Jasmine Black (1) drives the ball toward during the Gators 51-48 loss to the Cal State East Bay Pioneers at the Swamp on Saturday, Dec. 3, 2016.

In their last home game of 2016, the SF State Gators squandered a two point lead late in the fourth quarter as they fell to the Cal State East Bay Pioneers 51-48.

The Gators were up by two with less than 30 seconds remaining in the game and one stop on defense would have secured them a win, but Pioneers guard Shomari Harris drained a contested three point shot to ultimately give the Pioneers the win.

The Gators were shocked and couldn’t gather themselves after the shot. They turned the ball over on the following possession, handing themselves their third consecutive loss.

“We didn’t execute down the stretch when we needed to,” said head coach Dennis Cox. “When they got the possession where they hit the three, we guarded them for most of the shot clock and they hit a huge shot. I thought we had a hand in her face but obviously it wasn’t good enough.”

From the opening tip, the Gators were physical and aggressive defensively, forcing turnovers in the Pioneers’ first three possessions. Their defense remained potent in the second quarter, allowing just 18 points to the Pioneers at halftime, which is the fewest the Gators gave up in a half to any team this season. They also held them to 23 percent shooting from the field.

It was a different story in the second half. The Gators defensive intensity dropped, allowing the Pioneers to score nearly twice as many points in the second half than they did in the first, doubling their field goal percentage to 46 percent.

Although the Gators shot better from the field in the second half, they committed 13 turnovers compared to only two in the first half.

“I wished there wasn’t a halftime today,” Cox jokingly said. “At halftime we cooled off a little bit and sometimes it’s tough to get yourself back up at the same level of intensity and coming out of the second half we didn’t match their intensity.”

Despite the loss, the Gators felt that they improved defensively as a team. They gave up 51 points which is the lowest they given to any opponent this season.

Forward Kaitlin DaDalt, who played in all 40 minutes and led the team with 13 points, said the loss will only make them stronger.

The Gators ( 2-7) will be on five day’s rest before they look to prepare for their conference rival, Sonoma State University on Dec. 9.