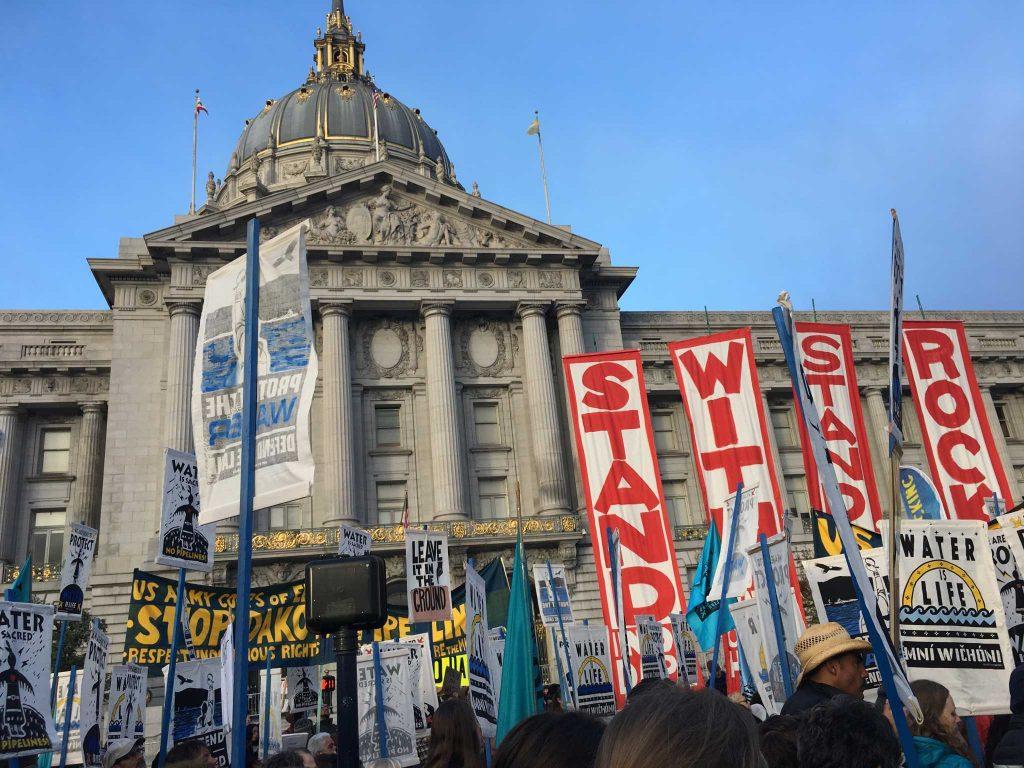 A rally in solidarity for Standing Rock at City Hall on the morning of Tuesday, Nov. 15, 2016. (Xpress/Brenna Cruz)

Picket signs and burning sage filled downtown San Francisco as students and community members gathered in solidarity with the Standing Rock Sioux Tribe against the North Dakota Access Pipeline on Tuesday, taking part in a nationwide day of action.

The early morning protest began at San Francisco’s Civic Center Plaza with prayers from people all over the Bay Area. Nov. 15, was declared a national day of action by the Indigenous Environmental Network and its allies in response to alleged attacks on protesters in North Dakota on Oct. 27.

“People at standing rock are fighting their own war, but the public is not going to listen until thousands of people are out here in the streets you know,” said Arlett Hernandez a first-year nursing student at SF State. “It’s all quiet over there, but once we start marching all over the country we’re going to be heard.”

Organized by Idle No More, a group of Native Americans who advocate for indigenous rights, the protest reached a 2,800 “going” attendance on Facebook with over 6,000 other people stating their interest in the protest.

Idle No More asked that protesters join them in urging the American government to end the construction of the pipeline by emailing, calling and writing letters to their local representatives prior to Tuesday’s events.

“No matter how many millions of dollars these corporations are using we’re asking as people of the United States, as people of all nations coming together, to protect this water because it’s precious and it’s life giving and no corporation should have the opportunity to destroy that for profit,” said Corrina Gould, a member of the Ohlone tribe as well as a speaker at the protest.

Protesters began their march on McAllister Street and settled in front of the U.S. Army Corps of Engineering building. The U.S. Army Corps of Engineering is the organization granting the multiple companies behind the pipeline permission to build through Sioux territory. Participants willing to be arrested for the cause sat in the middle of Market Street on a parachute with the words “Defend Mother Earth” painted in black bold lettering.

“I feel like taking to the streets, it makes a statement,” said Christabel Ramirez, an undeclared sophomore at SF State. “We’re here for Native Americans and we’re not going to stop fighting for them because water is life. They deserve it.”

Pipeline protesters are worried that its construction under the Missouri river, the biggest river on the continent, would not only endanger sacred Sioux land, but also harm the environment with constant threat of oil spills.

“We just hope that the decision can be overturned and that respect could be given to mother earth and the land and to the water so that we may fuel future generations,” said Vanessa Saucedo, English Education major and senior at SF State.

Earlier this year, SF State students and faculty held a teach-in in support of the NoDAPL protesters, as reported by Golden Gate Xpress.

The Standing Rock Sioux Tribe has been protesting the pipeline in North Dakota since April this year, however construction on the pipeline continues and there have been no legal mandates to halt its completion.