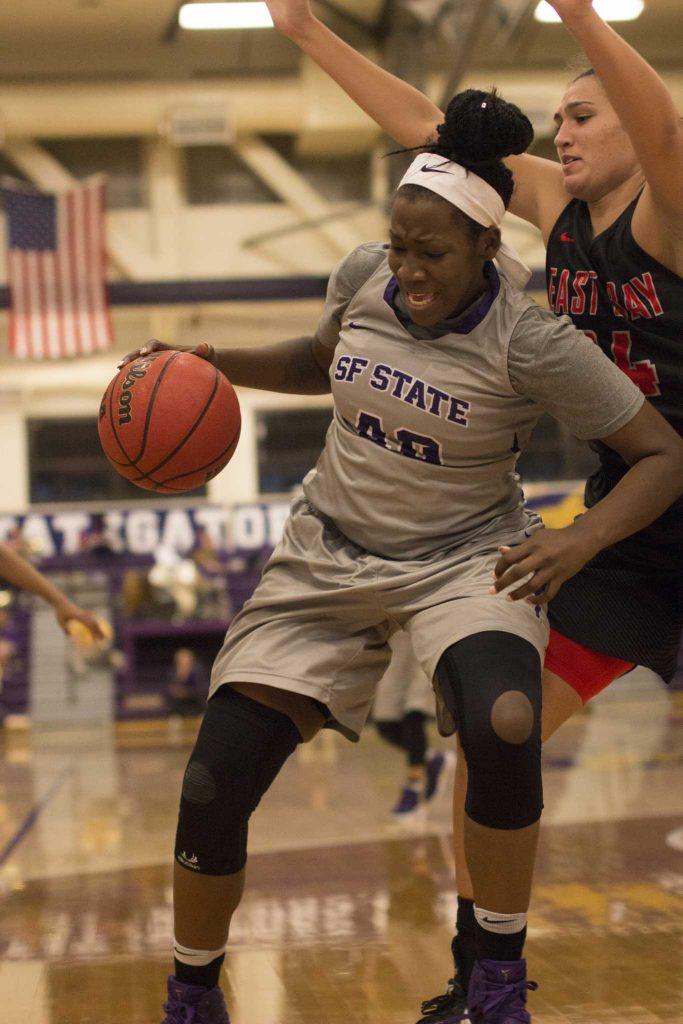 On the basketball court, her coaches and teammates define her playing style as aggressive and consider her the team’s vocal leader. Off the court, she is described as one of the most kind and joyous people they know.

The Gators’ off-season acquisition, forward/center Donae Moguel, has certainly made her presence felt.

In the first nine games of the season, Moguel led the Gators in scoring and rebounds with an average of 10.6 points and 6.6 rebounds per game. She has also started the last four games.

“Donae is someone we call a banger because she’s physical around the basket. She gives us a low post presence and inside scoring,” said head coach Dennis Cox. “She’s definitely been the bright spot in our disappointing start.”

Growing up, Moguel was a huge fan of the NBA. She said the players that inspired her the most were Allen Iverson and LeBron James.

“Even though I’m a big person, I like point guards and I love LeBron. He’s a big man and can do everything,” Moguel said.

Moguel said the experience she gained from playing on the East Coast has been beneficial in her time with the Gators.

“West Coast is a different style of play than the east,” Moguel said. “It was a lot rougher there with the games I had played.”

In her two year stint on the East Coast, Moguel experienced brief success. She averaged a double-double with 13.5 points and 11.4 rebounds per game at Chesapeake College and helped lead the team to a regional championship and a trip to the National Junior College Athletic Association’s tournament.

Moguel’s success at Chesapeake College opened the opportunity for her to play for an NCAA Division II school. She transferred to Virginia State where she averaged 6.8 points per game off the bench.

After just one season with Virginia State, Moguel felt homesick and wanted to move back to her home state of California.

“I chose SF State because I’m from Los Angeles, so the Bay Area is not too far from home. It’s hard being out of state and so far away from my family,” Moguel said. “I could never get home. I’ll be in the East Coast almost the whole year and only come home on summers, so I was like you know what, I want to come home for Thanksgiving and Christmas.”

When Moguel contacted the Gators about transferring to the team, they were already set with their players. However, when one of the players was non-committed, Cox arranged for her to work out for the team and was immediately impressed.

“She has a really strong body and a good touch from the perimeter, even from beyond the arc, so we chose her,” Cox said. “We’re really happy to have her.”

Cox said what he admires the most about Moguel is how quickly she established value in the team.

“She’s vocal, has a lot of energy and talks on the court, which coaches really like to have in a player,” Cox said. “She adds some toughness to the team and I like how vocal and confident she is.”

Center Kiara Ginwright said off the court Moguel is the kind of person anyone would enjoy to be around.

“She’s being a really great teammate and friend. She always cooks for us and every single time we need someone, she’s always there to answer our calls or come over to our houses,” Ginwright said. “I love her, she’s a very unique and special character.”

After her playing career concludes with the Gators, Moguel said she will finished playing basketball at a competitively and will focus on completing her education. Nevertheless, Moguel is thankful for the bond that she made with her teammates.

“I really enjoy my teammates; they’re amazing. I do it for them and I just want all of them to succeed,” Moguel said.