Labor archives exhibit closes with a message for current times 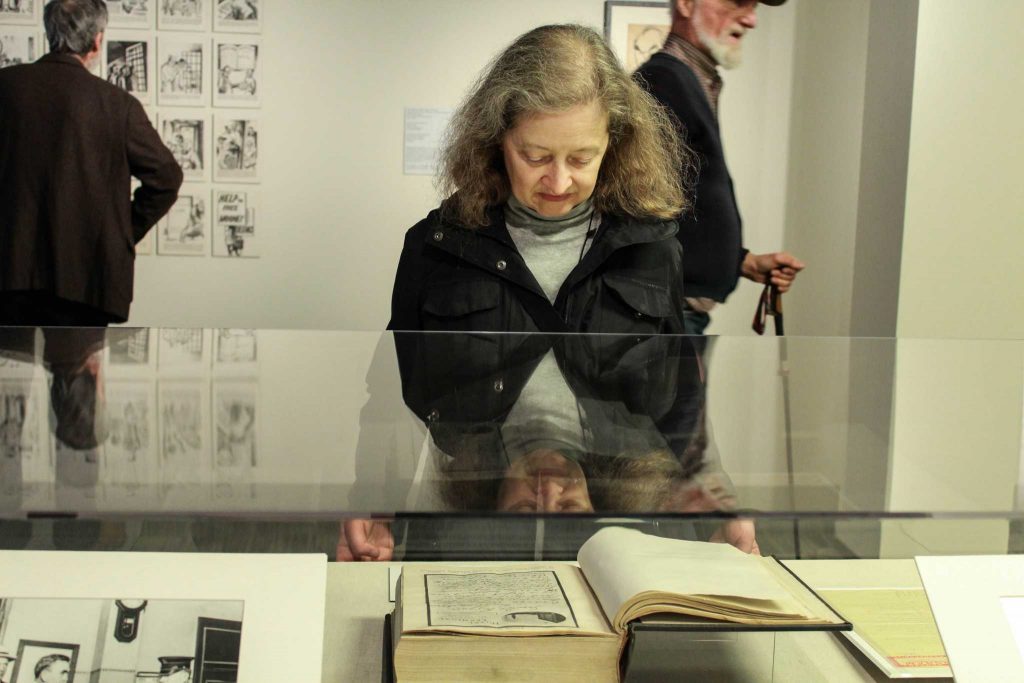 San Francisco resident Lisa Dunseth looks at a book during the exhibit of the San Francisco Preparedness Day Bombing in 1916 in the J. Paul Leonard Library on Tuesday, Nov. 29, 2016. Photograph by: Kayleen Fonte

At the closing program of the Labor Archives and Research Center’s exhibit, “Worshiping the God of Dynamite,” San Francisco Chronicle columnist Carl Nolte led a lecture about how the events of the Preparedness Day Bombing of 1916 can relate to modern times.

The event brought together local residents of the labor community who grew up learning about the events of the Preparedness Day Bombing throughout their life as well as others who wanted to learn more.

“I’ve read a little bit about this event, but labor and local history is definitely something that I have an interest in,” said Sean Conwell, a literature masters student.

The Preparedness Day Bombing occurred in San Francisco on July 22, 1916, during a parade organized by the Chamber of Commerce to show the military readiness of the United States. The parade was held before the U.S. entered World War I.

During the parade, a time bomb, later believed to be in a suitcase, detonated on Steuart and Market streets, leaving 10 bystanders dead and 40 wounded.

“This story is a San Francisco story, it involves drama and an interesting situation that has lessons for our own time, whether it’s a time of peril or worry,” Nolte said to the crowd.

Many in the 32-person audience murmured in agreement with Nolte, as someone exclaimed, “Trump!”

In his lecture, Nolte also described how events such as the bombing of 1916 can lead to the hunt for scapegoats, which leads to innocent groups  being blamed for tragic terrorists attacks.

The Labor Archives and Research Center hosted “Worshipping the God of Dynamite,” in the Special Collections Gallery in the J. Paul Leonard Library to coincide with the 100-year anniversary of the bombing. It’s composed of the department’s collection of records and primary source material, including a donation of documents from the University of Wyoming.

“The title is not about a call for violence but a charge against those who are beating the drum for war,“ said exhibit Curator Tanya Hollis.

The name of the exhibit was taken from an entry in The Blast, an anarchist newspaper of the time, which criticized those who wanted the U.S. to enter World War I.

Hollis said the Preparedness Day Parade was meant to be patriotic and to inspire people to support the United States’ entry into the war. However, Hollis said many in the labor movement opposed the parade because they felt war would only hurt the working man.

“It was a sense that the war was going to cost the poor the most,” Nolte said. “Things like the Preparedness Parade stood to benefit the people that could produce munition or retool factories into wartime production.”

Hollis pointed out specific labor newspapers displayed in the exhibit that warned union members they suspected something bad would happen during the parade, and the labor community would be to blame .

Thomas Mooney and Warren K. Billings, prominent labor organizers in San Francisco, were both blamed for the detonation of the bomb. Both Mooney and Billings were convicted. Mooney was sentenced to death and Billings to life in prison, despite there being photographic evidence proving their innocence.

According to Hollis, Mooney and Billings weren’t very much liked by city officials and members of the Chamber of Commerce for rallying people to join labor unions, making them susceptible to being framed..

The most recognized piece in the exhibit is the photograph taken six minutes before the bomb went off showing Mooney and Billings watching the parade from a roof miles away from Steuart and Market streets. However, this photograph was never admitted into evidence during the trial.

“We have photographic evidence that this event could not have happened,” Hollis said. “Much like we have all this documentation of people with cell phones, uploading images of people being shot by police and having it undermined in the courts over and over again.”

According to Hollis, several students who came to see the exhibit related Mooney and Billings’ experience to how many people in today’s justice system are sentenced to death row in spite of being able to prove their innocence.

Chika Okoye came on the advice of a friend and SF State student, wanting to learn more about the historic bombing and story of Mooney Billings.

“Those elements of corruption haven’t actually changed,” Okoye said. “What we have now is what’s always been happening. This stuff still happens.”

Nolte ended his lecture with a message of hope for those worried about corruption under President-elect Donald Trump’s administration.

“To get Mooney and Billings out of jail you had to have an aroused citizenry and had to have a free press that was willing to take chances against all odds,” Nolte said. “If you stand up for what you believe in, it will all work out.”