Campus group sells donuts to raise dough for the homeless 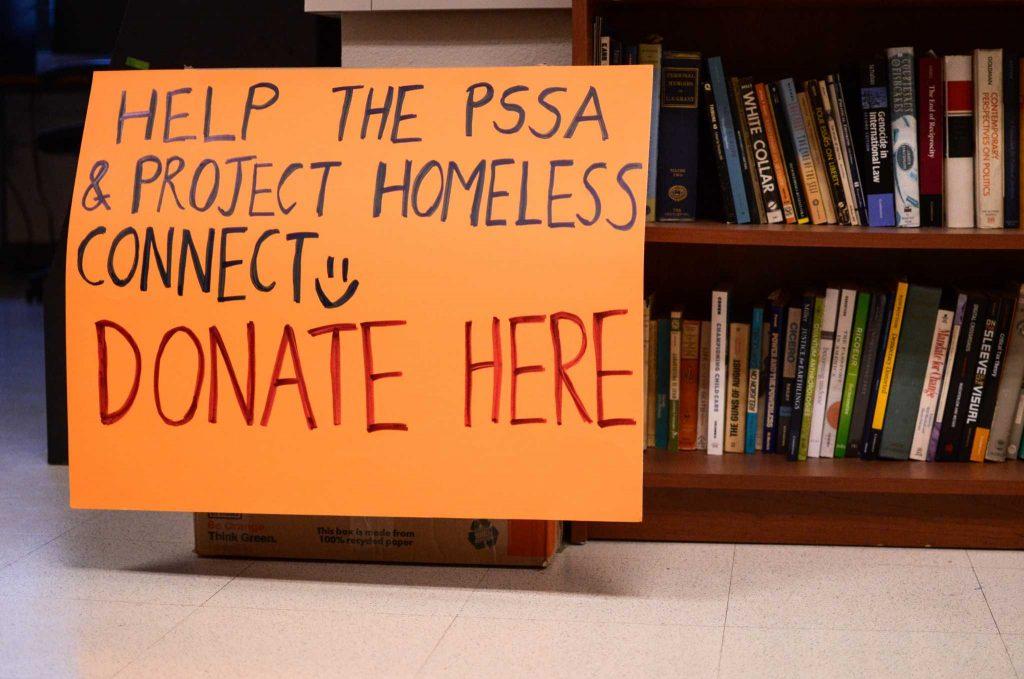 A donation box in a political science classroom at SF State where PSSA collects clothes, bags and backpacks to help the homeless on Thursday, Dec. 8. Photo: Melissa Minton

With boxes of Krispy Kreme Donuts to appeal to morning commuter students making their way to campus, the Political Science Student Association asked for donations for the homeless.

On a chilly Tuesday morning Aliana Fuata, president of PSSA, stood by 19th and Holloway avenues wearing several layers to keep her warm. Until Friday, she and other members of PSSA will be giving donuts to students that donate $2.

“This is a worthy cause,” said Fuata, who had been giving out donuts since 8 a.m.. “The weather is getting a lot colder and this is a time when homeless people are especially vulnerable.”

The allure of morning donuts seemed to work. As one student walked with the current of commuters who arrived to campus on MUNI, he passed by the sign advertising the fundraiser in front of Fuata, and went back to get more information.

To organize the fundraiser, PSSA partnered with Project Homeless Connect, a San Francisco non-profit whose mission statement is to help connect the homeless to service and care.

“I respected what this organization stood for,” said Bianca Pilar, one of the organizers of the fundraiser. “They provide medical services, distribute care packages, grocery and shelter services.”

In addition to the $2 donut donations, students will also be able to contribute to the drive by giving items such as clothes and backpacks to help with the care packages PSSA will give to the homeless. Care packages will include necessities like razors, toothbrushes and shampoo, said Paula Tran, vice president of the association.

Donation bins have been placed in Humanities 304 and near the dorm lobby areas in Mary Ward Hall, Mary Park Hall and the Village.

Pilar was inspired to act and organize the donation because she believes homelessness in San Francisco is an important issue to tackle. She plans to collaborate with Project Homeless Connect again next year to host another drive.

“When our members moved to San Francisco one of the first things that we noticed was homelessness as a result of poverty, inequality and gentrification,” Pilar said. “All of us feel like we wish we had the solution. It’s going to take some time, but in the meantime we can help provide some relief as the weather grows colder.”