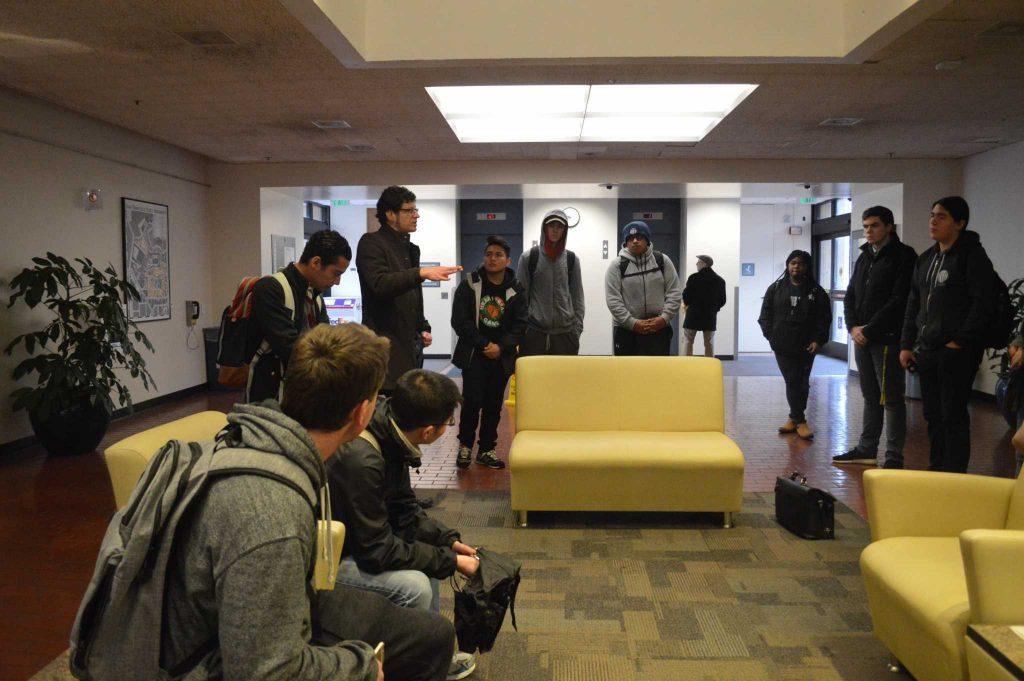 Robert Ovetz addresses a group of CASHH members in the lobby of the administration building on campus on Thursday, December 8, 2016. (Photo: Jacqueline Haudek)

Around 20 students from the Campus Against Student Homelessness and Hunger club delivered a petition to President Wong’s administration Thursday morning to request a program to provide resources for homeless students similar to the Homeless At-Risk Transitional Students Program at City College of San Francisco. The petition was signed by over 600 SF State students.

President Wong was in a meeting when students arrived to his office, but gave a statement through University Communications.

“I share our students’ and others’ concerns about homelessness and food insecurity, which affects not only our campus but the Bay Area as a whole,” Wong said in the email. “Our campus Ad Hoc Advisory Work Group on food insecurity and homelessness has been meeting regularly to figure out how we can respond to this important issue, and I fully support their efforts.”

The Ad Hoc Work Group was created this past August after a revelation that around eight percent of California State University students experienced homelessness, according to a report released this summer.

The Ad Hoc Work Group consists of faculty, staff and students who work on researching and developing resources for students experiencing food insecurity or homelessness. The group is working on enrolling students in CalFresh, federally known as Supplemental Nutrition Assistance Program and more commonly as SNAP. The group is also planning an all-day enrollment event for Spring 2017, as well as looking to develop a meal-swipe donation plan with student ID cards and a way to distribute leftover food on campus.

In terms of homelessness, the group is still in the beginning stages. For the Spring 2017 semester, they are working to identify a single point of contact on campus to help address basic students needs and to conduct more research on homelessness at SF State. David Rourke, director of residential life, helps run the Ad Hoc Work Group and believes there’s a strong need for this group on campus based on the amount of attendees at each meeting.

“I believe participation is indicative that the basic needs of our students have been a concern for our campus for some time and there is a desire within pockets of our campus community to make a difference and affect change” Rourke said over email.  “Generally, the working group exists to promote communication, collaboration, and consistent dedication to these concerns from one year to the next.”

Robert Ovetz, who teaches the class that CASHH began in, believes the University is not doing enough to help homeless students.

“I think the university needs to stop studying the problem and take immediate action. There are serious students in need,” Overtz said.“Our mission needs to be more than just taking care of a student in the classroom. We need to consider a student as a person and what’s happening to them in their times in between class.”

Many students in the CASHH club also felt passionate about the issue.

“There’s so many students who can’t help themselves because they’re in this position of being homeless so they need someone who has a voice,” said Megan Atwater, a nursing major.

“Hopefully, with this petition we got attention or we got something going,” said Marco Ponce, an undeclared major who delivered the petition to President Wong’s office.

Mary Ann Begley, the interim dean of students, had not seen the petition as of Friday, but mentioned that the Homeless At-Risk Transitional Students Program run by City College would be something the University could look to for ideas.

“We are communicating and looking into that program some more to see how they’re funded and to understand how they built their program,” said Begley.

“This Ad Hoc group is working to get us to that space where we have a similar program but one that is definitely built for our students at SF State and includes their voices in it too,” said Begley. “Having the student voice is so critically important to us so that we can make sure that we’re not missing any gaps and that we’re addressing what students need.”

As of right now, the two options for homeless students are the Help, Opportunity Pathway to Empowerment crisis loan and emergency housing, which is harder to obtain since there are only around 3,800 beds to serve the 30,000 student population at SF State.

According to Begley, a new housing development project to expand university housing is in the works and there is conversation about possibly setting aside some university housing for low-income students. Begley also mentioned that if any student should find themselves in need of housing or food, they are encouraged to come to the dean of students’ office for resource assistance.

“We would be happy to work with any student around any issue they may be facing, even if it’s beyond food insecurity and homelessness,” Begley said. “We really strive to make sure no student goes without.”