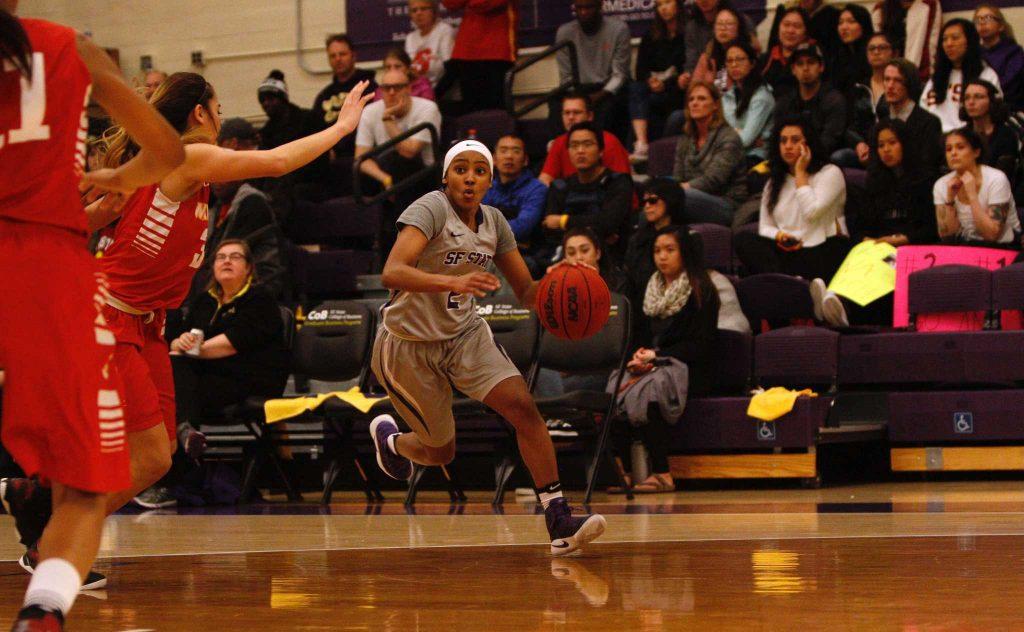 The Gators continued their losing streak last night at The Swamp, after falling late in the game against Stanislaus State Warriors 64-57.

The two teams last met in January where the Gators also lost, 45-58.

Though the outcome of Friday’s game was the same as the Gators’ last matchup against Stanislaus, the journey proved more successful this time around as forward Donae Moguel led the team with 19 points and 14 rebounds.

“I like how we fought hard,” Moguel said. “But at the end we just came a little bit short.”

Kaitlin DaDalt made a couple of three’s in the first two quarters, managing to keep the Gators in a reachable distance from the Warriors.

DaDalt’s efforts were not enough to make up for what the Gators’ lacked defensively throughout the game, a struggle that paved the way for the Warriors to score 28 points in the paint.

The Gators did shine in some aspects of the game as they strategically took advantage of the Warriors’ missed rebounds and errors, scoring 17 of second-chance points.

“We played tough, moved the ball well,” head coach Dennis Cox said. “But what beat us was not being able to match up with them.”

Late in the third quarter, the Gators trailed by 18 points but managed to bring down the deficit to 3, ending the game with 15 points and 3 rebounds.

Though DaDalt played a major role in the Gators’ game of catch up against the Warriors, she was unable to carry the team to their desired victory.

The Gators struggled not being able to match up against the Warriors in height. The Warriors came into the game with five players over 6 feet and the Gators with four players, but only two were put on the court Friday night.

“From the beginning of the season till now we have improved in our shooting,” Cox said. “We are also playing tougher.”

The Gators showed heart and passion, fighting to the bitter end, but inevitably, crucial missed shots and errors led the Gators to come up short in their fourth quarter rally.

Looking at the silver lining of the game, Cox said sophomore Lauryn Catching made the most progress, playing tougher and driving harder.

The Gators’ perseverance throughout the difficult game is what they will choose to focus on going into Saturday’s game against the Chico State Wildcats.

“I’m proud at the fact that we didn’t quit,” said Moguel. “We will keep our heads up and move forward.”