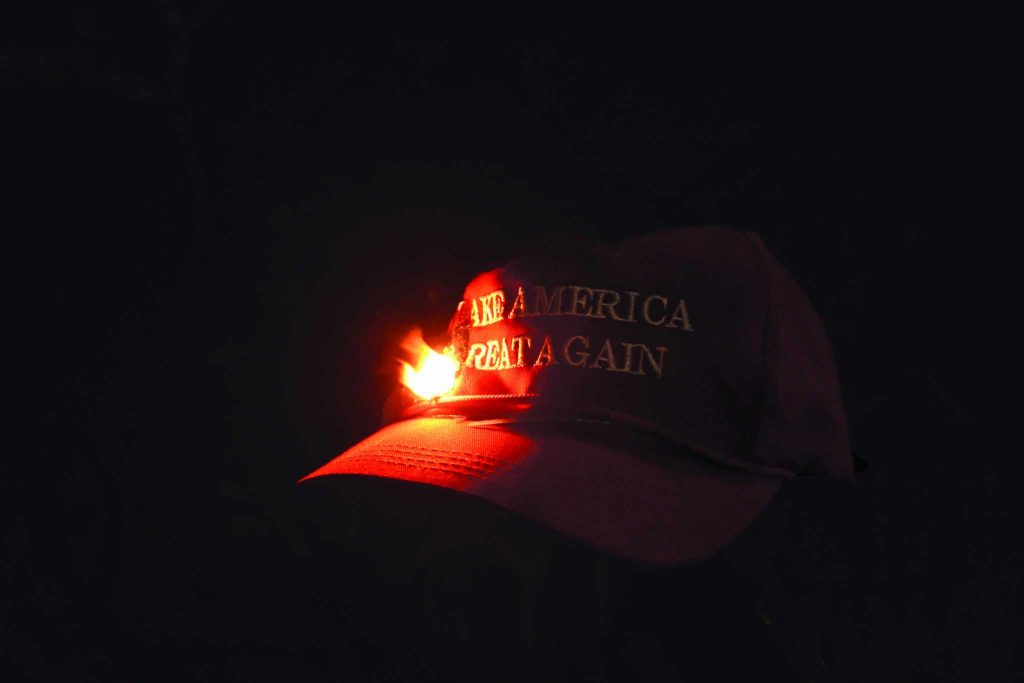 A Trump Supporter's hat is set on fire at a riot protesting controversial speaker Milo Yiannopoulous, who was scheduled to speak Feb. 1, 2017. The event was canceled due to violent riots (Tate Drunker/Xpress).

In the wake of the cancellation of Milo Yiannopoulos’ speaking event at UC Berkeley Wednesday, Feb. 1, a national conversation erupted over free speech on college campuses.

Yiannopoulos, who critics charge with racism and sexism, has ignited controversy and sparked  protests at venue after venue on his recent college speaking tour, “Dangerous Faggot.” In most cases, however, the self-proclaimed internet troll has been allowed to take the stage—even at the University of Washington, where a protester was shot in the stomach.

Yiannopoulos asserted that UC Berkeley had violated his First Amendment right to freedom of speech after his event was canceled, a charge he made via his Facebook page the day after his slated talk.

“UC Berkeley should have all federal funding cut until it can demonstrate its commitment to the First Amendment…” he wrote.

Trump tweeted, “If U.C. Berkeley does not allow free speech and practices violence on innocent people with a different point of view – NO FEDERAL FUNDS?”

If U.C. Berkeley does not allow free speech and practices violence on innocent people with a different point of view – NO FEDERAL FUNDS?

Experts at the American Civil Liberties Union, which specializes in the litigation of constitutional suits, have asserted that there is little cause for either Trump or Yiannopoulos to feel aggrieved. In an email, Linda Lye, senior staff attorney at the ACLU of Northern California in San Francisco, agreed that publicly funded colleges and universities have a legal obligation to respect speech rights on campus. In this instance, she believes no such violation had taken place.

“UC Berkeley did the right thing by recognizing the free speech rights of both the speaker and the protesters as much as possible before safety became an immediate issue,” Lye wrote. “They refused to cancel the event despite calls to do so, and took measures intended to ensure the safety of the event participants and the demonstrators.”

The legal and ethical dilemma UC Berkeley administrators found themselves in was addressed by Chancellor Nicholas Dirks in an open letter to the University released through the school’s website.

He described Yiannopoulos rhetoric as “hate speech,” but also said “…the U.S. Constitution prohibits UC Berkeley, as a public institution, from banning expression based on its content or viewpoints, even when those viewpoints are hateful or discriminatory.”

Apart from the disputed claim that Yiannopoulos’ speech was somehow violated, Trump’s threat may ring hollow as there is currently no legal mechanism in place to cut funding to a university even if it made such a violation, experts said in widely circulated reports.

Don Heller, a University of San Francisco provost, told Newsweek on Thursday, “There is nothing in current legislation that would allow Trump to do that.”

Reports surfaced on Friday in the British paper The Independent said that the purpose of Yiannopoulos’ talk was to identify undocumented students and encourage his audience to do the same. In an interview which aired on Fox News Feb. 2, Yiannopoulos claimed he had planned to speak about cultural appropriation, appearing in a Native American headdress.

Yiannopoulos later said, via his Facebook page, that the reports were “lies,” but an article published the day before the Berkeley event on the Breitbart News website, where he is an editor, confirmed that the canceled discussion would have been on immigration.

Still, there is no measure by which public universities may regulate speech based on content.

“We cannot pick and choose who is protected by the Constitution,” Lye said.