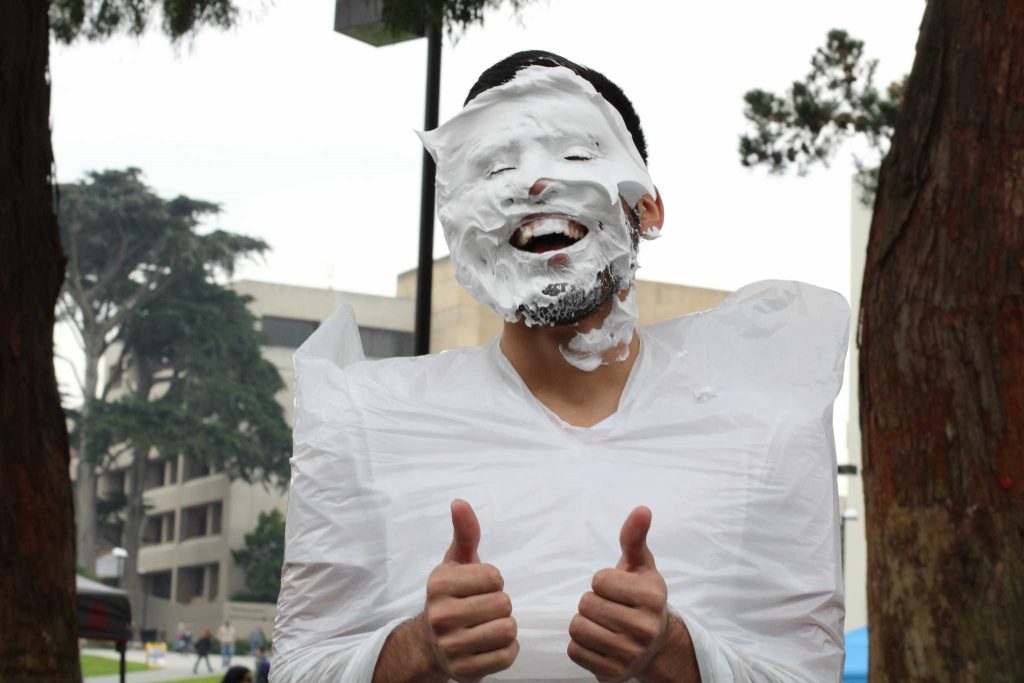 Arturo Dominguez gives two thumbs up after being pied to raise awareness for the Hermanos Unidos de SFSU organization in front of the Cesar Chavez building on February 1, 2017 in San Francisco, Calif. (Alina Castillo/Xpress)

Correction: A previous version of this article mistakenly identified Hermanos Unidos as a fraternity. The text has since been corrected.
The members of the Hermanos Unidos, a predominantly Latino-based organization at SF State, volunteered to get pied in the face to raise funds for their academic outreach program last week.

The fundraiser was created to support Hermanos Unidos’ Students With Academic Goals, otherwise known as the S.W.A.G. outreach program. According to Adrian Sahagun, the organization’s fundraiser chair, the event usually brings in $50 with pies-in-the-face costing $2 each.

Dylan Jauss has been a part of Hermanos Unidos for two years and said he enjoys working the booth for this fundraiser because he appreciates the help S.W.A.G. provides to high school students.

“April 22, we will have an outreach for high school students all throughout the Bay Area,” Jauss said. “They can come here and be involved in workshops like resume building, how to apply for colleges, how to fill out FAFSA applications. Things like that.”

Jon Guevarra, who is a member of the Epsilon Sigma Rho Multicultural fraternity, threw a pie at Jhony Zavaleta, a Hermano, on Wednesday.

Guevarra said he tries to help out with other fundraisers when he can because he knows what it is like to be ignored by passers by.

“It just felt good for me, you know helping out with another org,” Guevarra said. “And now that I know where the money goes I feel even better about it.”

On Tuesday, Zavaleta had a “pie” made out of shaving cream thrown at him six times. He volunteered to be a pie victim because he’s not always available for his organization’s other fundraisers but when he is, he chooses to go all in. He also said he likes it because it is a fun, light-hearted activity.

“It feels like a big marshmallow hitting you in the face,” Zavaleta said. “And now it’s like exfoliating my skin because it is shaving cream, everything is a little smoother, there is a little tingly sensation to it.”

Organization President Arturo Duarte said he volunteered to get pied when he first heard about it his freshman year. He said it was a fun experience, except for the aftereffects of whipped cream.

“We used whipped cream and once it dried, it left a really bad smell,” Duarte said. “That’s why when we did it this year we used shaving cream instead, and that worked out a lot better.”

[/media-credit] Alexa Medina helps clean off Zoram Morcado after getting pied in front of the Cesar Chavez building on February 1, 2017 in San Francisco, Calif.

Duarte said pie throwing is a quick fun way to raise funds and he enjoys experiencing the interactions between his hermanos and those who throw the pies.

“My favorite part of the fundraiser is seeing everyone have fun, both the people pieing and the people getting pied,” Duarte said. “It’s a great experience on both sides of the plate.”

Zavaleta said Hermanos Unidos has given him a positive experience, especially during events like this.

“Everyone is really big on family, just a brotherhood,” he said. “It’s really just about becoming a better person every day and building your network and coming together to get better grades.”