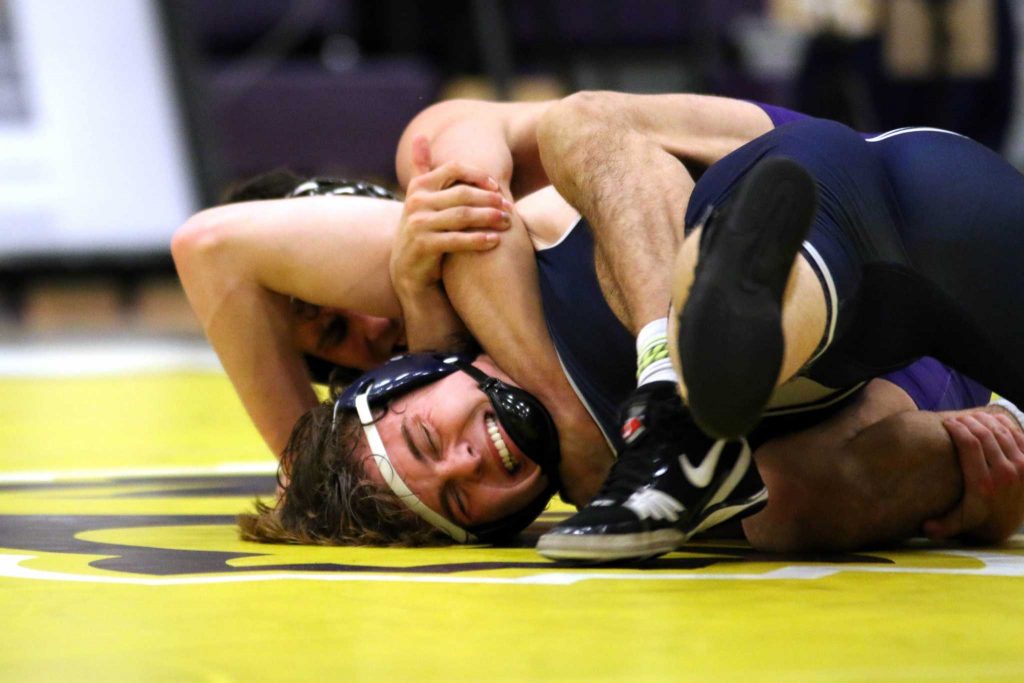 Senior night at The Swamp was supposed to be a celebratory occasion, but ended in a loss to Menlo College Oaks 19-20.

Jensen said his coaching staff wore leis out of respect for Kuahine, who was unable to wrestle in the 165 weight class match against Oaks’ Erik Stockwell.

“Most of the team has the flu and some even wrestled tonight, but no excuses,” Jensen said. “We knew it was going to be close because we had Tyson out.”

Jensen said the Gators have beaten their rival Menlo College for 10 straight years, and therefore one loss would not devastate the team.

“It was a good crowd tonight and a good rival match,” Jensen said. “Now all we have to do is win one more.”

Jensen said Stanford University is their next opponent, and the Gators have to get better in practice before they play the Cardinals this Saturday.

Redshirt freshman Joshua Villaflor started off the night with an aggressive match, but ultimately lost 2-10.

The Gators did not let the loss of their first match deter them as they proceeded to win three straight matches with senior Dylan Furtado, redshirt freshman Trevor Perez and sophomore Romeo Medina. The three set up senior Jesse Lyga with his match against Menlo’s 174 weight class opponent Isaac Rangel.

“I kind of dug myself a hole and couldn’t get out, but I got to get better in the final two weeks.” Lyga said. “I wish I got the win but it feels good to wrestle here in The Swamp for the last time.”

Lyga said he is now focused on going out strong in the regionals in two weeks.

Perez said Furtado and Lyga did well and put hard points in the pin count tonight.

“It was some good matches tonight and I knew I had to do my best,” Perez said. “Going against Menlo I knew I had to get out to a big lead so I just went out there and put my legs in.”

Overall, the Gators’ seniors went 2-1 in their respective matches as senior Johnathon Costa lost his match against Menlo’s Young Woo An 3-9.

The Gators will match up with DI Stanford University wrestling, Saturday at 2 p.m. at Burnham Pavilion and Ford Center.