The Gators chomp down on Chico State 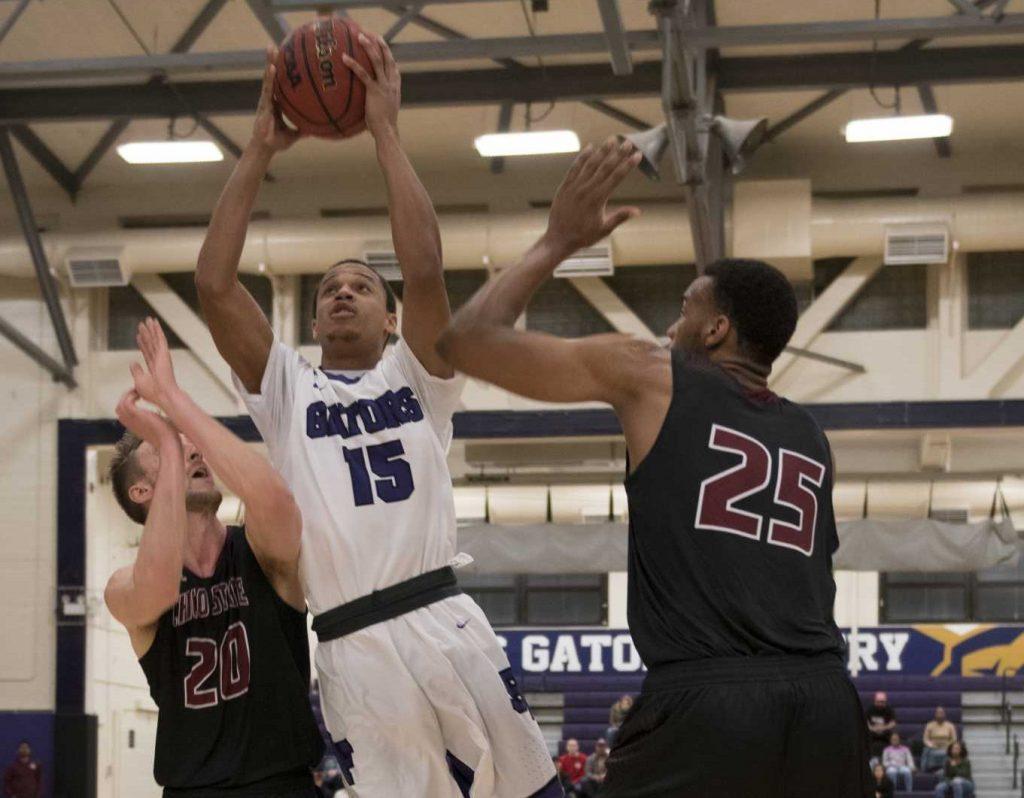 SF State Gators guard Israel Hakim (15) drives through the defense of Chico State Wildcats guard Nate Ambrosini (20) and freshmen center Justin Briggs (25) and goes for the basket during the Gators' 65-51 win over the Wildcat at the Swamp on Saturday, Feb. 4, 2017 (Lee Kin/ Xpress).

Last weekend proved memorable for sports, both nationally and locally. Super Bowl LI broke at least 30 records, including being the first Super Bowl in history to go into overtime, and SF State men’s basketball head coach Paul Trevor had his 100th career win in his seventh year with the Gators.

“It means the world to me,” Trevor Said. “It couldn’t come with a better group.”

What makes the win even more memorable is that it was against California State University, Chico, one of only three teams to take home a win this season against the Gators in December.

This time around, the Gators proved themselves to be the dominant predators in The Swamp against the Wildcats Saturday evening.

On the heels of an overtime win against California State University, Stanislaus, the night before, the Gators started the game off aggressively, maintaining control of the ball, pushing their way to the net and utilizing the strong defense they’ve displayed throughout the season.

“We’ve been very good defensively,” Trevor said. ”We really put an emphasis going into this weekend about how we were going to match the physicality, because that’s the last piece to the puzzle for us.”

The Gators, who are currently second in the nation in NCAA Division II field goal percentage defense, overpowered the Wildcats in the first half 26-19.

Jackson, along with senior guard Israel Hakim, were instrumental in field goal percentages throughout the night, with both scoring 13 points each for the Gators’ offense.

Though Chico had finally seemed to have found their footing in the second half, scoring 32 points in all, it was too little too late, with the Gators maintaining their strong momentum throughout the entirety of the game, a goal the team has been working toward this season.

The team also found their strength in rebounding throughout the night, another weakness they have worked to overcome throughout the season. Redshirt sophomore Chiefy Ugbaja impressed with a total of 12 rebounds for the night, followed by Jackson with nine and senior AJ Kahlon with six.

With a final score of 65-51, the Gators defeated the Wildcats, avenging their previous loss and pushing their way to into a second place ranking in the California Collegiate Athletic Association. The Gators are narrowly trailing behind the University of California, San Diego, who is currently ranked number three behind Chico State in the NCAA regional rankings.

Hakim said Saturday’s game was a matter of who played harder and who wanted it more.

“Last time we played them we got outworked on the board,” Hakim said. “We just watched film, learned from our mistakes and that was the result tonight.”

Beaming like a proud father, Trevor said last year’s team set the foundation for this year’s team to make the great strides it’s been making in the league.

“These guys, they make me so proud,” Trevor said. “This group has earned it. We’ve got a nice nucleus right now, we’re in a good spot.”

The Gators’ back-to-back wins catapulted them back into the National Association of Basketball Coaches NCAA Division II Men’s Basketball Rankings at No. 21 after a two-week hiatus.

After a well-deserved two days off, the Gators were back to work this week, preparing to chomp their way toward to another back-to-back win, when they play California State, Monterey Bay Friday in Seaside. Following that match, the Gators will face off with previously defeated California State East Bay in Hayward Saturday.

Though coach Trevor is upholding the team’s motto of “one game at a time” by solely concentrating on Friday’s game, he said the Gators’ win against Chico State helped to solidify SF State’s flourishing reputation within Division II men’s basketball.

“I think they’ve seen we’ve arrived,” Trevor said. ”To beat Chico at home is that signature win that says we’re on the map for real, and you better be ready if you’re going to play the Gators.”