A week of resistance encourages students to speak out 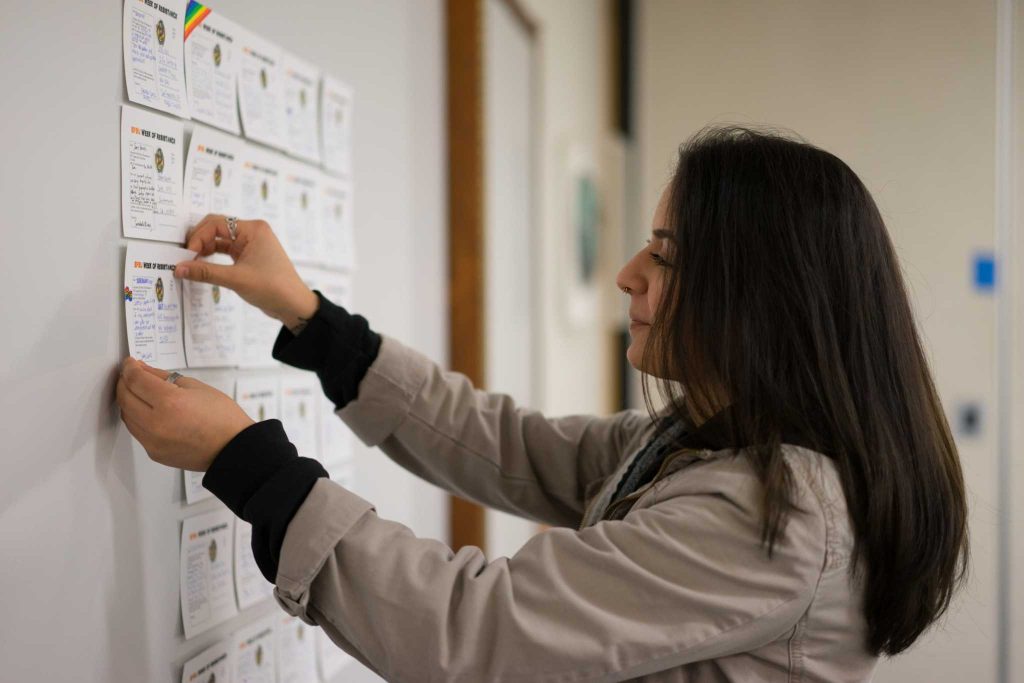 Gabriela Ceeros, a junior majoring in Latina studies, adds her letter to the wall for the Week of Resistance where students can find contact information for their district representatives and state senators to send letters addressing their concerns about the immigration ban by Donald Trump, in the Cesar Chavez Building at San Francisco State University on Monday, February 6, 2017. (Sarahbeth Maney/Xpress).

In response to President Trump’s travel ban, three SF State students organized a series of events  for people to express their objections as a part of the Week of Resistance.

Alisar Mustafa, a political science major, Alec Santos, a communications major, and Jamila Cambridge, a Residential Life assistant, created the event as a way to stand in solidarity with Muslims, immigrants, undocumented people and refugees, according to their flier.

The Week of Resistance began on Monday and will continue until Friday as a response to Trump’s executive orders regarding the travel ban and wall. Student volunteers distributed postcards to students and provided them with the addresses of government officials in their individual district.Volunteers encourage students to either write thank you letters to officials who have spoken out against the travel ban, or to request they take action on this issue. Volunteers have stamps to give to students and will mail the postcard for them.

In addition to the postcards, the Week of Resistance will offer other opportunities to get involved, such as phone banking and a community forum. The event description promises “opportunities to connect with the community on/around SFSU should you need support, love, a space of expression, a space of bravery, or a space to process,” according to the flier.

One of the students spearheading this project is 20-year-old Alisar Mustafa who moved to the United States from Syria when she was 14. Mustafa is here on a green card visa and is also in the process of applying for citizenship which keeps her from participating in many different forms of activism.

“I don’t feel safe participating in a protest. I can’t get in trouble or I might face deportation which is something people should think about when they have protests,” Mustafa said. “That’s why I’m doing this. It’s peaceful expression and lobbying.”As someone who holds a green card, this is an important and personal issue for Mustafa.

“It targets immigrants and people who have green cards and it goes beyond the values that America holds so dear,” Mustafa said. “I can’t leave the country because I don’t know if I’ll be able to return.”

Though there are several ways to contact government officials, 24-year-old Alaina Fuata, a political science major and a volunteer at the event, believes handwritten notes are particularly effective.

“It’s whichever method works best for people, but handwritten is a medium that not a lot of people use anymore,” Fuata said. “It shows a lot of thought and time and it’s more personal than an email.”

The project attracted several students on their way to class, either stopping to write a postcard or promising to come back later in the week. Several students were eager to participate because of their strong dissent against the travel ban.

“It’s racist, unconstitutional and utterly fascist,” Kale Blake, a 33-year-old kinesiology major, said. “Even if that wasn’t the case, it would still be useless for the purposes he says it’s for. Most terrorism here is done by white, Christian men.”

Another student said this project is similar to one of her own. Greer Mugettrick, a 34-year-old music composition major, has been handing out envelopes to people, encouraging them to write to officials about the travel ban. In addition to this, she has been calling officials like Dianne Feinstein and Kamala Harris as another form of protest.

“There’s so many more people on our side than I thought,” Mugettrick said. “I feel like we don’t have the privilege of being apolitical.”

Volunteers will be offering postcards throughout the week at a table set up in the Cesar Chavez Student Center on the Plaza level from 10 a.m. to 3 p.m daily until Friday, February 10.