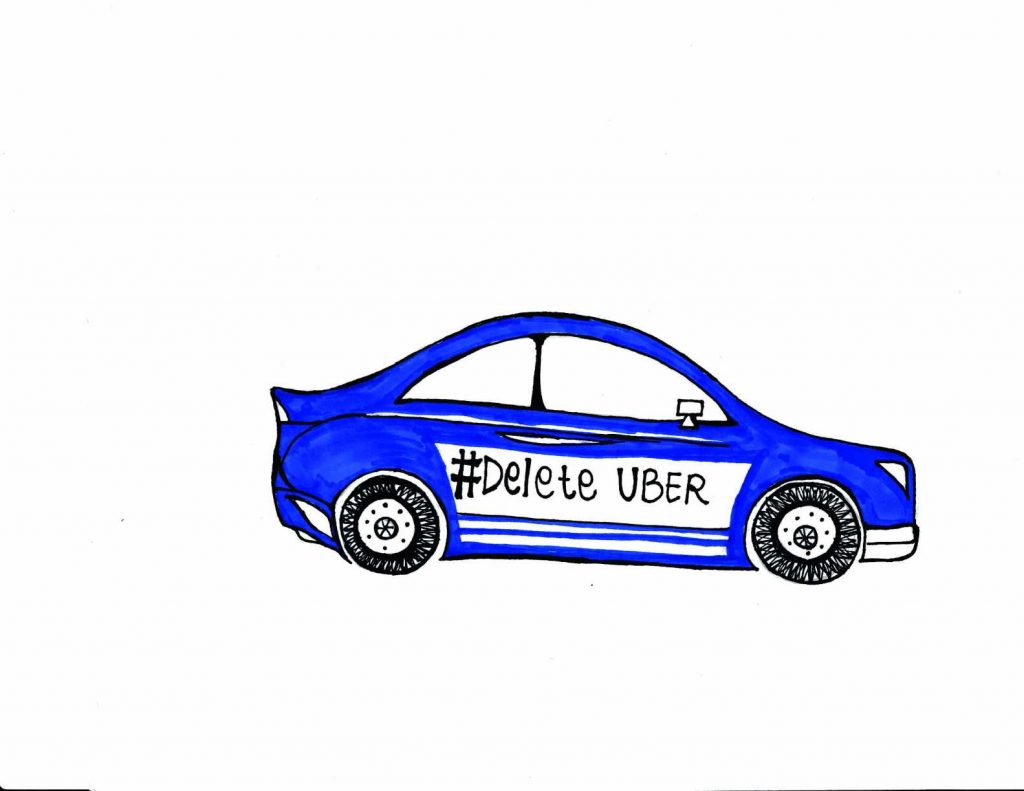 The Uber boycott continues with SF State students, as they do their part in deleting the ride-sharing app, following the company’s decision to temporarily turn off their surging prices to and from John F. Kennedy International Airport during protests and subsequent taxi strikes, according to their Twitter account, during the protest of President Trump’s travel ban.

Outrage among the app users quickly spread as the company was accused of taking advantage of the protest for monetary gain, in contrast to taxi drivers who supported the protest by choosing not to give service to and from the airport after several people were detained.

“I am not going to participate in giving any of my business toward companies that actively support fascism,” said Harry Tafoya, an SF State alumnus.

“I think (Trump’s) agenda is absolutely odious. Having Uber participate in a business council gives legitimacy to an administration that should not be in power,” Tafoya said.

Uber CEO Travis Kalanick has served on President Trump’s business advisory council, but recently stepped down. He continues to state through his Twitter account that he does not support the president’s travel ban.

“We have a team of in-house attorneys who’ve been working night & day to get U.S. resident drivers & stranded families back into country,” Kalanick said Feb. 3 on his Twitter account.

“Perhaps one of Trump’s greatest legitimacies of his presidency was based on how he had been seen by many as such a successful businessman,” Tafoya said.

“I think if you are serious and you are in opposition to this administration … a good way of expressing that is making sure your dollar is your word,” Tafoya said. “If you make a statement as a consumer that you’re not going to support a business because of its affiliation with Donald Trump, that takes a big hack at his credibility.”

Current SF State student Sydney Peterson said she had been thinking of deleting her Uber app for a while. She believes the company historically had not been handling workers’ rights or sexual assault accusations appropriately, but the CEO working with Trump’s business advisory team was “the last straw.”

“A lot of people are talking about it,” Peterson said. A good handful of people I know deleted Uber.”

Tafoya said he knows many people who also deleted the app — even his parents are participating in the boycott.

Peterson said living and getting around in San Francisco while boycotting the app won’t impede her schedule. She used to use Uber 1-7 times a week, but she will now be relying on public transportation and Lyft, Uber’s competitor ride-sharing app.

Peterson and Tafoya expressed it may be difficult at times when they are running very late, but they are standing by their decision..

“There are far more people who are sympathetic to Muslim taxi drivers organizing a protest with the airport,” said Robert Ovetz, a professor in the political science department. “It’s an expression of solidarity. It’s a very old form of political protest to express your opposition to a policy directly in the workplace.”

Ovetz also mentioned Uber drivers resigning due to the controversy.

“It’s a kind of labor action … The National Labor Relations Commission found last year that Uber drivers are employees. So it’s a kind of strike, actually,” Ovetz said. “These Uber drivers are refusing to work for this company as long as they are engaging in policies that are unjust and undermine fellow taxi drivers.”

Despite the company’s apology and Kalanick stepping down from the council, the #DeleteUber hashtag continues to be popular on social media.

The Uber boycott is just one recent example of consumer backlash against companies for political reasons.

Another trending hashtag with a similar agenda, #GrabYourWallet, was created in October 2016 and aims to boycott any company that does business with the Trump family. Its website, https://grabyourwallet.org/, lists several major retail stores, a majority of which carries Ivanka Trump products. Among those on the list include Macy’s, Bloomingdales, TJ Maxx, Bed Bath and Beyond, Amazon and Zappos.

In return, Trump supporters have been participating in boycotts as well.

#BoycottNordstrom began trending after it was reported that the retail store would no longer be selling Ivanka Trump’s line.

The movement to boycott Budweiser beer has also been popular among the president’s supporters. Many people believed the company’s one-minute commercial, a story supposed to represent one the of the founder’s immigration to the U.S., was meant to criticize the president’s immigration policies.