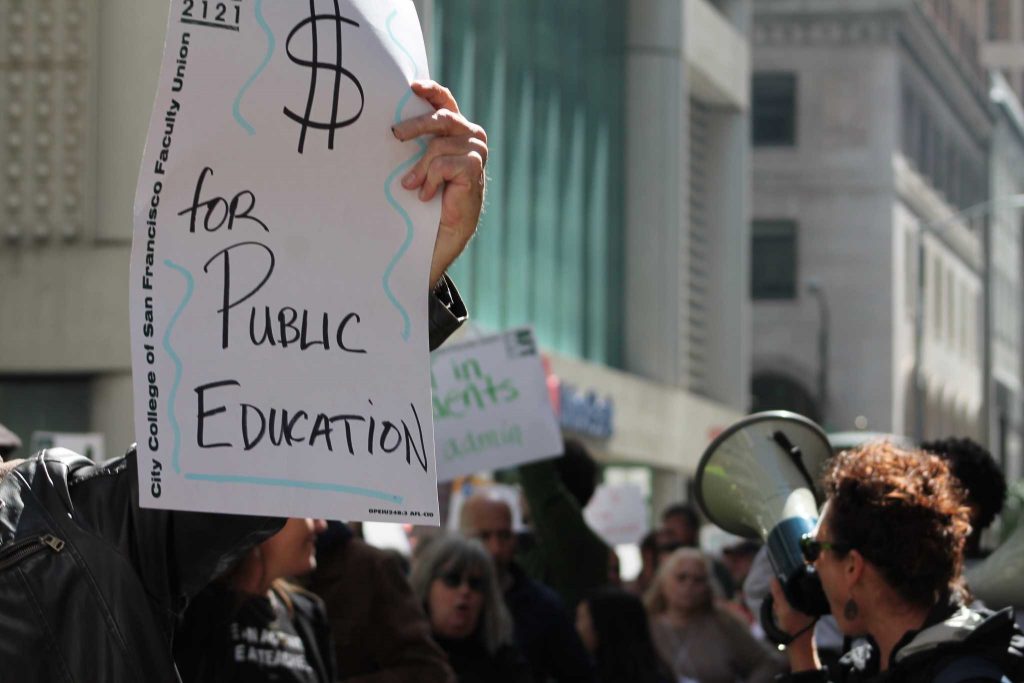 The City College of San Francisco Board of Trustees unanimously approved a deal to support free tuition for residents, but some fear the agreement leaves undocumented students behind in a time when the city stands as a safe haven from Trump’s deportation policies.

The meeting began with board members sharing words of gratitude toward Jane Kim and all involved in making free City College a reality. Teachers and a board member shed tears as they spoke about the historic vote. The entire audience squeezed in for a group picture and cheered, “Free City College!”

However, some public commenters shared a different sentiment, followed by Trustee John Rizzo proposing an amendment for the mayor to secure additional funds for undocumented students.

“We have to stand up with action, not just lip service,” Rizzo said during the meeting. “I think asking the mayor to do this is not unreasonable.”

Under the current agreement, undocumented residents who have lived in San Francisco for more than a year, or who graduated from high school in the city are covered by Proposition W funds. The program excludes undocumented immigrants who are not year-long residents, requiring them to pay out-of-state tuition fees of $234 per unit.

“This isn’t everything that I think I, or certainly Supervisor Kim, wanted,” Trustee Rafael Mandelman said. “But it is a framework to build on, certainly going forward as we see what comes out of the Trump administration and doing whatever we need to do to take care of our undocumented students.”

Deferred Action for Childhood Arrivals students will be given free tuition through the program only if they have lived in California for a year or more. Trustee Alex Randolph pointed out that immigration groups are now telling students not to register for DACA for fear of the federal government having access to undocumented student information. There is also a possibility DACA will be defunded by the Trump administration altogether.

Assembly Bill 540 allows qualified students to be exempt from paying out-of-state tuition, although not all undocumented students qualify under this state law. Trustee Tom Temprano told the board more than 600 of these students will benefit from the proposed amendment, according to statistics proved by Interim Chancellor Susan Lamb.

Kim pointed out that the logistics of funding all undocumented students are not simple, although she fully supports the idea.

“I am committed, and my understanding is that the mayor is committed, to figuring out how to make City College free for undocumented students that live in San Francisco but for whatever reason pay out of state tuition,” Kim said. “I think the question is how do we identify these students?”

The college currently collects no data on student immigration status and has declared itself as a sanctuary campus, as was discussed during the board meeting. The difficulty with providing specific funding for all undocumented students is how to identify them without making a registration list that could end up in the hands of the Trump administration.

“There’s no liberation for some of us without liberation for all of us,” said City College student Vivek (JJ) Narayan. “If we are truly to be a sanctuary city, or a sanctuary campus, we’re not there yet. We have to pass this knowing that we are committed to continuing fighting to make sure that this reaches all of our students.”

Win-Mon Kyi, also a City College student, added that undocumented students are often the first to be put on the back burner, and with the Trump administration there may not be a “next time” opportunity to include them.

The amendment passed unanimously after back-and-forth debate about its components.

The final draft requested “the mayor, the board of supervisors, and the oversight committee to work with the administration to secure additional funds to assure access to all undocumented students.” The amendment went on to read, “We also direct the chancellor to work with the foundation and community to secure additional funds to help these students through grants and scholarships.”

“I want to be clear that the program is not everything that our students or the voters deserve,” said Alisa Messer, political director at the American Federation of Teachers Local 2121. “In particular, the support for low-income students is inadequate, and not all students that we consider to be San Franciscans are included.”

The new program guarantees free classes at City College for all SF residents, and provides full-time students who previously received a state-funded tuition fee waiver with $250 per semester for living expenses. The original proposal, announced by Kim last April, made low-income students eligible for up to $500 in educational support funds.

Undocumented students often live in households with significantly lower incomes than U.S.-born residents. The Pew Research Center reported that the median household income of undocumented immigrants was $36,000 in 2007, compared to the median income of American-born residents of $50,000. Unlike other immigrants, this study showed those who are undocumented do not attain higher incomes the longer they live in the U.S.

Kim suggested that the program’s oversight committee, comprised of individuals from AFT 2121, the chancellor, board members, and the mayor’s office, be in charge of determining the way to grant funding to undocumented individuals and expand the program over time.

“Like any program it has room to get better,” said AFT 2121 President Tim Killikelly.

The time for implementation is limited. A Memorandum of Understanding is expected to be passed in March. A functioning program needs to be in place by the registration date of April 17, according to Vice Chancellor Ron Gerhard.

“What we’ve done here is to really be a face of resistance,” Killikelly said. “People need that for the hope to go forward. They really need it.”