Gator women pull off back-to-back wins at the Swamp 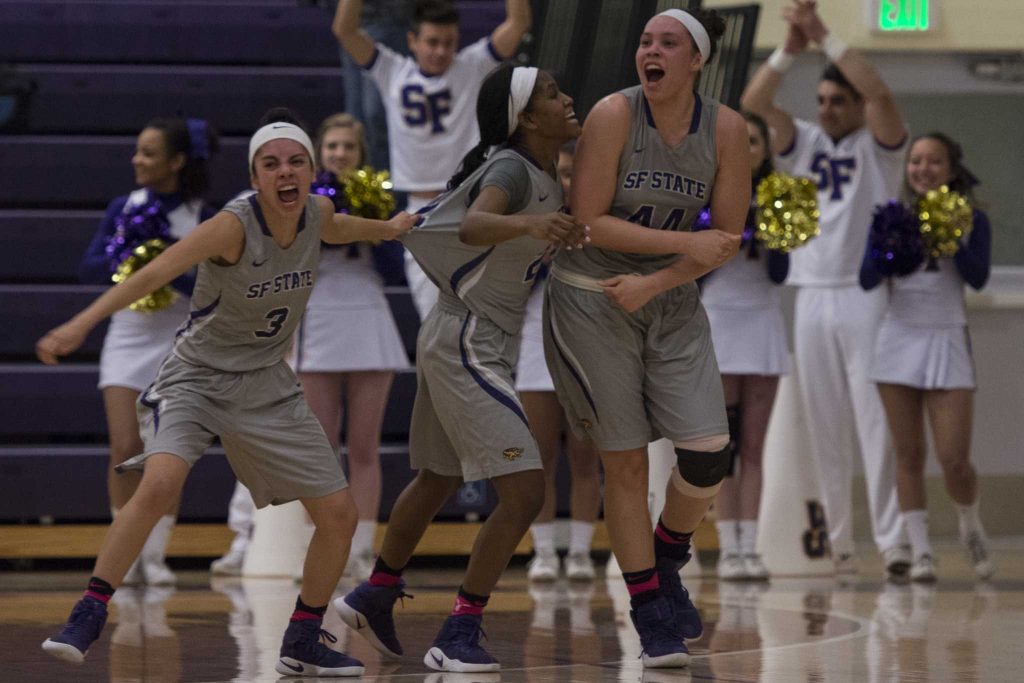 The Gators celebrated Senior Night with their second win in a row and biggest comeback of the 2016-17 season, overcoming the double-digit deficit.

Gators’ Jasmine Black put up 22 points Friday night, a season high, and was on pace Saturday to having another good game, up until mid-third quarter where she went out with a leg injury.

“I feel bad for Jasmine and Lauryn who went down last night,” head coach Dennis Cox said. “Unfortunately it’s a big part of the game and I hate it.”

After Black was carried off the court, Cox had to switch from zone defense to man. The bench was running thin with three eligible players — a Gators comeback looked unobtainable.

“I honestly give our team a lot of credit for last night and tonight,” said Cox. “Somebody else stepped up every time.”

The impact players for SF State were forward Kaitlin DaDalt with 25 points and six rebounds, as well as Donae Moguel with 10 points and 11 rebounds. At a point in the fourth quarter it looked like the Gators just wanted to get the ball in DaDalt’s hands, and she delivered shots from all ranges.

“Everything we ran in the last five minutes of the game was through her,” said Cox. “She was in one of those rare zones and we did a good job in feeding her the ball.”

Throughout the game when the Golden Eagles looked like they were about to take flight, Moguel would come in with a clutch three-pointer to keep the Gators within distance.

“I feel like I did pretty good but as a team we had a great game,” said Moguel. “It was just an amazing game, it was nice.”

When the last buzzer sounded off, the whole SF State team and most of the crowd jumped up and cheered, knowing how meaningful this game was, especially to the senior players.

One notable player coming off the bench was center Kayla Watterson, giving the Gators a great work ethic defensively by not letting the opponent take control under their rim. Watterson ended the night with two points, six rebounds, and one assist, most coming through in crucial moments.

“The unsung hero of the night was Watterson,” said Cox. “Her energy defensively, her steals, her rebounds.” Cox said she came off the bench and inspired the team.

The Gators close their last two games at the Swamp with tremendous wins, improving to an overall 4-21 and 2-16 conference record.

“I’ve never been prouder of a group,” said Cox.