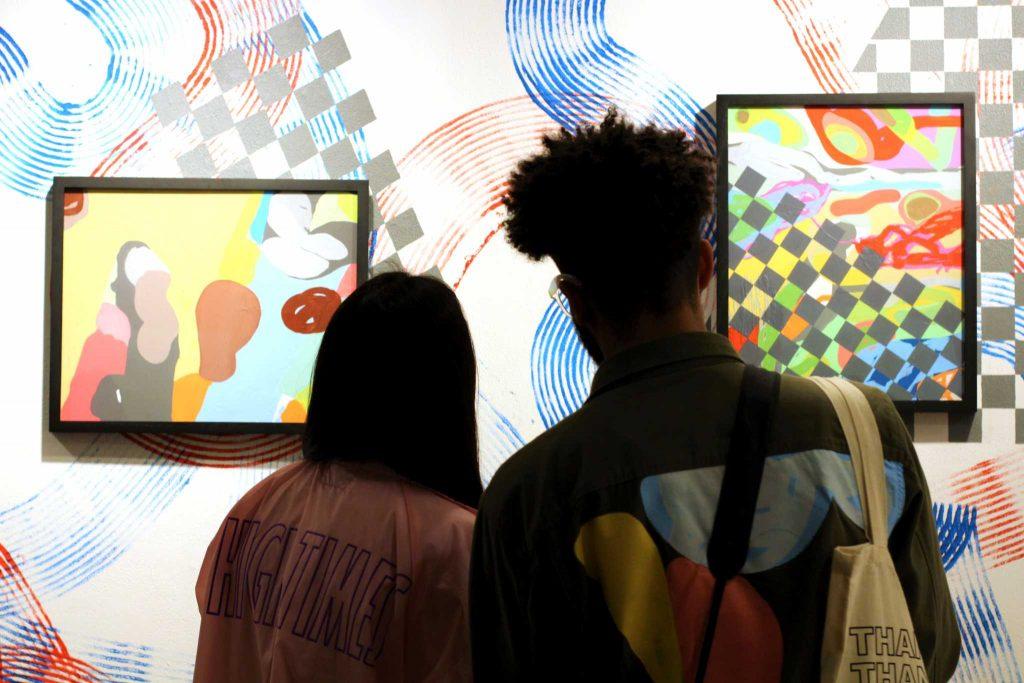 Michael Covington, 28, and girlfriend Vanessa, 24, admire the works of art Covington produced for the showing of "Shakin' System" in the Cezar Chavez Student Center at SF State on Thursday, February 16, 2017 (Alina Castillo / Xpress).

Because of the dwindling percentage of black people in San Francisco, Gipson believes

“…it’s very important for black people to show up in spaces like this and kind of force people to have conversations.”

Arrington “Ace” West, a member of the Black Mail Collective and curator of the show, said he wants “Shakin’ Systems” to be a reminder to overcome oppression, which starts from within.

West added that the artists in the show also resist by breaking stereotypes and expectations of black artists that should not be there.

“You can be a person of color and exist in the realm of abstractions,” West said. “I feel like when people think of abstract art they think of Jackson Pollock or Frank Stella.”

Gipson’s goal for the show is to entice people to think critically about things they encounter on a daily basis. He, much like West, believes that his existence is a form of resistance.

“Everything that I do is political. The fact that I’m breathing right now as a black person,” Gipson said. “Everything. The way I wear my hair is political.”

The artwork in the gallery was just as political as Gipson’s dreads. Each piece of art was connected in some way to visually express the struggle blacks have in America, and the artists of the Black Mail Collective fight that “stigma” by showing their work particularly during Black History Month.

“‘Shakin’ Systems’ refers to the social structure of inequality and misrepresentation in the United States,” read the gallery’s Facebook event page. “It magnifies the constant movements that people of color create in order to navigate the racism embedded within the infrastructure of society.”

The exhibit’s focal piece was a mural on the wall by featured artist Michael Covington. The vivid red and blue detail caught the attention of event attendee Natalia Neira, who witnessed the process and preparation of painting the only mural displayed in the exhibit.

“He was really into his work. He was doing it so fluidly and so effortlessly,” Neira said. “You can tell he put a lot of emotion into it. It’s not a specific thing, but you can tell what he’s trying to say.”

Art major Meehaun Glasper-Wade said Covington’s mural pulled the exhibit together and he appreciated how each piece was connected in some way.

“It’s super beautiful, there is a beat to it, the music and all the colors and directions,” Glasper-Wade said. “Even the stuff they put on the wall draws your eye to everything else, like it’s connected.”