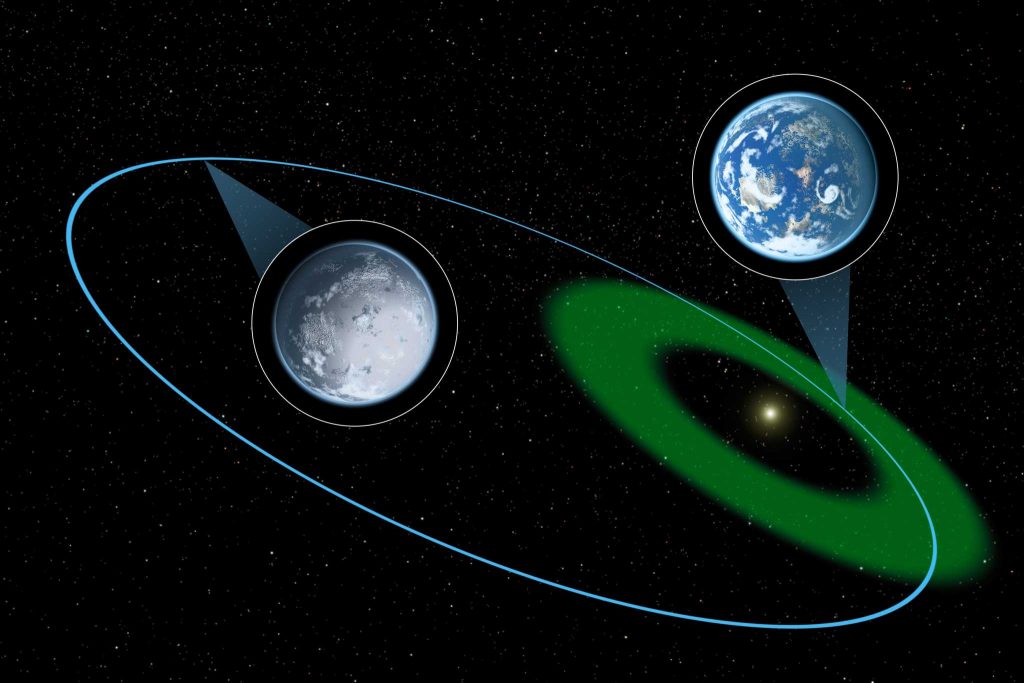 Illustration shows an artists rendition of a rocky exoplanet with water that could freeze over after every orbit of the host star in Wolf 1061, making these planets potential habitable for life. (Image credit: NASA/JPL).

An SF State astronomy professor is making headway with his research on exoplanets that may have conditions to support life.

Stephen Kane, who teaches Introduction to Astronomy, Stellar Astrophysics and Exoplanetary Science at SF State’s physics and astronomy department had his work published in the latest issue of the prestigious peer-reviewed Astrophysical Journal, gaining him recognition in the science and astrophysics community, according to a University Communications press release.

The professor has been spearheading research on Wolf 1061, a solar system in the Milky Way galaxy approximately 14 light-years away from our own system, according to Kane.

Miranda Waters, an astronomy major who graduated in December and one of Kane’s former assistants, initially introduced the Wolf 1061 system to his corpus of research.

Waters thought the system orbited by three planets was odd and brought Kane’s attention to it. According to the alumna, their team jumped right in to help find out more, and was able to get additional help from outside sources, such as Tennessee State University, to aid in research.

“We had great tools at our disposal, like telescopes in Tennessee and Arizona,” Waters said.

Along with the help of several other SF State graduate and undergraduate students, Kane and his research assistants then submitted their newest research paper entitled, “Characterization of the Wolf 1061 Planetary System,” to the Cornell University Astrophysics Journal, which explored the new findings on the system that houses three different planets.

“Habitability is exciting because it’s talking about if the planet is small in size like the Earth, does it have a rocky surface, could it have an atmosphere that could support life and does it have the right temperatures?” Kane explained. “And that’s what we call a habitable zone around a star, where it [the planet] could still have liquid water on its surface.”

According to the research, planets in the Wolf 1061 system have a rocky, or “terrestrial,” surface and one of the three planets sits right on the edge of the habitable zone — both are potentially habitable characteristics.

“1061c (the planet in the middle of the system) is at the right distance, it’s right on the inner edge of the habitable zone, where you could have liquid water,” Kane said.

However, according to Kane, many more elements of a planet need to be explored in order to determine if any form of life could exist.

“There are a  lot of pieces that go together to see if it’s [the system] habitable or not,” Kane said. “So the smoking gun for any planet is to be able to measure the composition of its atmosphere … in order to look for biological activity that is influencing the atmosphere.”

Levels of oxygen from plant photosynthesis and methane excrements from animals like cows are signs of biological activity that would affect atmosphere, according to Kane.

Once the newest NASA James Webb space telescope is launched, Kane and his team should be able to extend their research to measure the atmospheric density of the planets in the system.

“The James Webb telescope has been in the works for the past 10 years and is due to launch in early 2018, which could help,” Waters explained. “Right now we’re just using our imagination to see what these worlds could look like.”

According to Waters, the most rewarding thing about studying and researching exoplanets is the idea of being able to see into the recesses of our galaxy.

“I honestly think it is just amazing to see what’s out there in the neighborhood and wondering if we are alone,” Waters said.

Maarten Golterman, former Department of Physics and Astronomy chair, said that many students in the program are taking great interest in Kane’s work and that “it is certainly inspirational for the students.”

“Exoplanets appeal to the public imagination, because … there may be other planets out there like ours,” Gloterman said.