The journey continues: Gators move on to final round of CCAA Championships 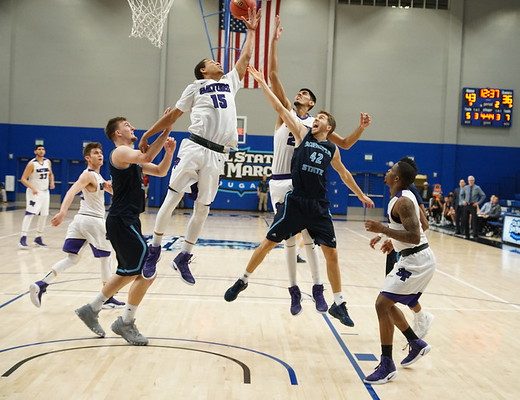 SF State Gators fight Sonoma State Seawolves for the rebound. The Gators beat the Seawolves 65-55 in the second round of the CCAA Championships in San Marcos, CA. (Greg Siler/CCAA)

The SF State Gators continued to make their mark in the CCAA Championships with another win against Sonoma State University, Friday night at The Sports Center in San Marcos, California.

On December 9, 2016 the SF State Gators men’s basketball team squeaked out a 65-63 win in playing Sonoma State on their home turf. Friday night, the number two seeded Gators and number three seeded Seawolves met again for yet another nail biter, only this time, the stakes were higher – moving on to the final round in the CCAA Championships, a position the Gators have not reached in years.

The Gators started the game dominating the Seawolves, getting their hands in passing lanes, using aggressive defense to force turnovers and jump starting the fast break into easy points. Sonoma State appeared frustrated by the Gators’ swarming defense, committing five turnovers within five minutes early in the first half.

“Our hands were great tonight ,” head coach Paul Trevor said. “We made good reads that allowed us to get out into transition.”

Gator guards Warren Jackson and Coley Apsay were catalysts on both ends in the first half, pushing the ball away from the Seawolves and dishing out good passes to teammates in transition.

The Gators controlled a majority of the first half, leading by as many 11 points. However as the half came to an end, Sonoma State went on a 7-0 run bringing the halftime score to 25-28. Despite Sonoma being thoroughly outplayed on both ends in the first, it seemed anyone’s game.

The second half started similarly to that of the first, but full court pressure supplied by the Gators forced turnovers and mistakes such as dribbling off the foot from Sonoma State. Senior guard Nick Calcaterra started the second half lead with a steal under the basket.

“Nick was huge for us coming out of the half,” Jackson said. “He had a couple huge plays that sparked us and got us going early.”

Exactly one minute later, senior AJ Kahlon made his play for a put back while earning a foul, giving SF State another and-one opportunity.

Despite struggling from the field, the Gators held Sonoma State to 32.8 percent shooting, helping seal the deal for a 65-55 win.

The win tonight against Sonoma State provided coach Trevor and assistant coach Vince Inglima with a win against their shared alma mater.

“I got my start in coaching at Sonoma State with coach Pat (Fuscaldo),” Trevor said. “I have so much respect for him and that program.”

Inglima approached his old school in a lighter competitive manner.

“Go Seahawks! Way better than Seawolves,” Inglima tweeted out before the game, referring to his time at Cabrillo College, home of the Seahawks.

With their win tonight, the Gators progress to the final round of the CCAA Championships against number one ranked University of California, San Diego, one of the only four teams the Gators lost to this season. The face off between the number one and two seeded teams will take place at The Sports Center in San Marcos, California Saturday night at 7:30.