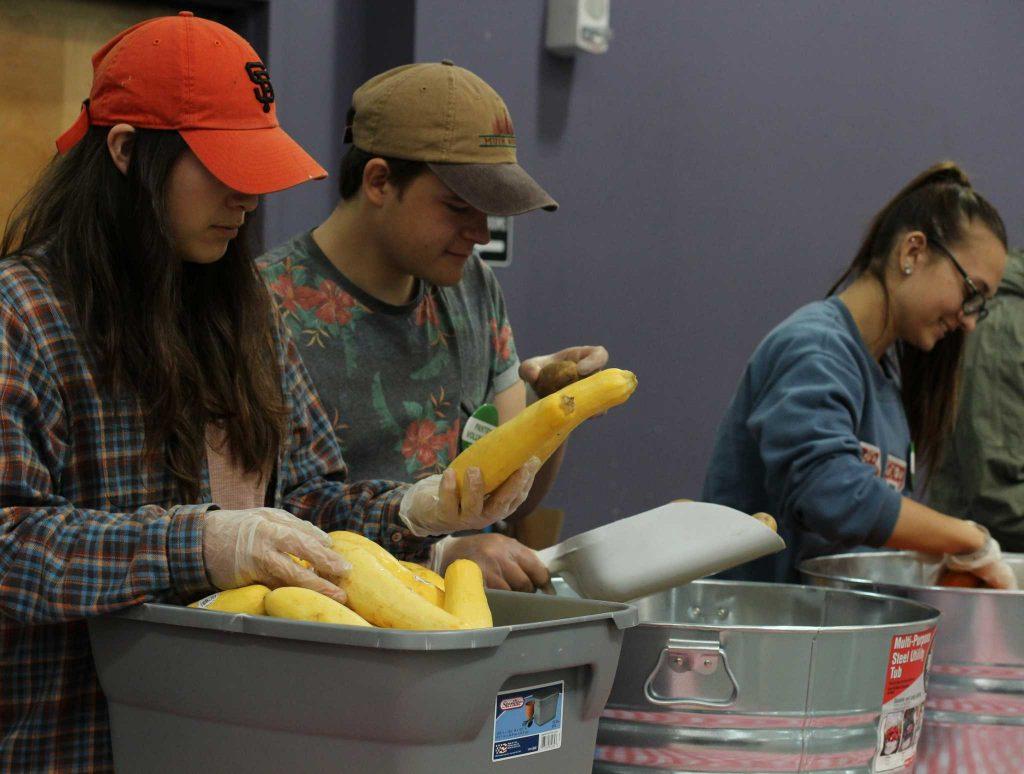 ASI, which is in charge of the weekly farmers market in front of the Humanities building, has always been interested in finding ways to help eradicate food insecurity on campus, according to Horace Montgomery, director of ASI programs and services.

The original plan was to set up boxes to collect food at the farmer’s market, but ASI decided to partner up with SF-Marin food bank instead. Through this partnership, ASI is able to facilitate a pop-up food pantry every Monday of the current semester.

“The food bank was interested in piloting this program with us because they had never been on campus before nor worked with a college,” said Montgomery. “They were really interested to see how this would work. I sat down with them and started the whole application and a year later, here we are.”

The student organization initially met with SF-Marin food bank two years ago in order to tackle food insecurity on campus. However, the idea of a food pantry didn’t arise until a year and a half ago, when Follett, the company in charge of SF State’s bookstore’s office management,  donated funds to ASI.

“There was a lot of conversation that there was a need for it (food pantry), so we wanted to participate,” Hussam Erciyes, director of the SF State bookstore, said.

Follett started collecting funds in fall of 2016 by offering a 5 percent discount on textbooks and 20 percent coupon on clothing and gift items when students donated $10 to the bookstore. By September 2016, Follett collected $5,700, which was then donated to ASI.

Montgomery specifically asked these organizations to distribute a survey he created himself.

Aside from distributing food to students through the pop-up food pantry, the partnership with the SF-Marin food bank is also aiming to make sure that students are getting healthy and fresh food.

“I was really happy when I received the email,” Nirella Calvillo, a  pre-nursing major said. “I like that they gave us fresh vegetables to promote healthy a lifestyle,” Calvillo, who received the invite through EOP and the Metro Academy, said.

Nohemi Gonzalez, an interior design major who received the invite through Guardian Scholars, expressed the same gratitude about the quality of food the pantry distributed. She was excited when she got the email invitation, knowing the free food would help free up money to pay rent more easily.

“It’s definitely a lifesaver. I got the email after shit hit the fan,” Tori, a first year student who preferred not to give her last name, said. “I’ll definitely have something better than ramen and peanut butter sandwiches tonight.” She also plans on going every Monday until she finds a way to afford food on her own.

Discussions regarding food insecurity on campus have been recurrent for the past few years. The University recently implemented a CalFresh program and is accepting applications to help qualified students obtain money for food.

The pop-up food pantry is another step student organizations are taking to address the issue. During the first interview with Golden Gate Xpress, Montgomery admitted he didn’t know for certain whether food insecurity was truly an issue because no official survey had been completed. After the first day of their food distribution, he retracted the statement.

“This definitely let me know that there was a need,” Montgomery said. “Today showed me how big that need is. About 30 students were waiting outside before we even opened. This was a humbling experience.”