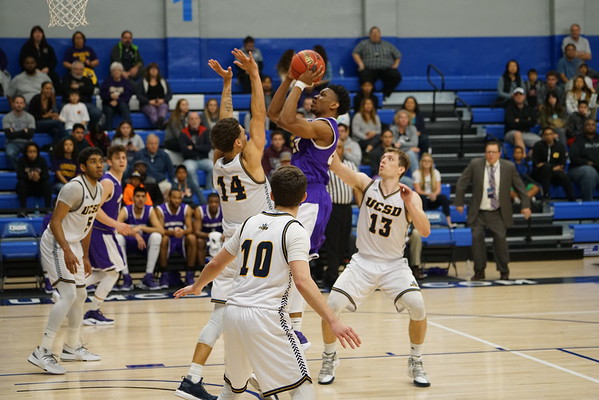 Senior Gator Derrick Brown fights to make a shot against the UC San Diego Tritons in the final round of the CCAA Championships in San Marcos, California, Saturday, March 3. (Greg Siler/CCAA)

SF State men’s basketball hit a bump in their road to the NCAA Division II Men’s Basketball West Regional, but they still have a shot in the game.

The Gators faced-off against number 1 seeded University of California, San Diego Tritons in the championship game of the CCAA Men’s Basketball Tournament Saturday night at the Sports Center in San Marcos.

After a defensively strong game against Sonoma State University the prior evening, which resulted in a 65-55 SF State win, the Gators were unable to gain a redemption win in their second attempt to dominate the Tritons.

The Gators started the first half sluggish, unable to score against the Tritons and giving up several three-pointers. Though the Gators were first to put points on the board, their lack of threes left them trailing behind the Tritons by 12 points early in the game.

In true Gator fashion, the Gators slowly gained momentum near the end of the first half. With a three from Warren Jackson followed by a jumper from AJ Kahlon, the Gator men gained their first lead with 2:10 left in the first, 37-36. But the lead proved short lived with a clap back from CCAA Player of the Year, Triton Adam Klie, pushing Triton ahead with 41-36 to end the half.

Senior Derrick Brown said coach Paul Trevor encouraged the men at halftime continue their strong defense and push forward, that the Triton’s weren’t anything the Gators couldn’t handle. The Tritons came out in the second half determined to prove the Gators wrong.

The Tritons went on a run, scoring a series of threes to set the tone of the second half, leaving the Gators in a scoring drought for six minutes of the second, the turning point that allowed the Tritons to move their lead up by 14 points.

Though the Gators were able to pull ahead with a resurgence of Gator scoring incited by a corner three by senior Coley Apsay, they failed to keep up with the aggressive Triton three-point run. The Tritons kept the Gators at an 11-point distance, ultimately closing out the game 78-63.

“They got hot, they hit threes and it made it really challenging for us to come back,” coach Trevor said.

Brown said the team came into the game ready to play, but in the end, they weren’t ready for the detail in play needed to defeat the Tritons.

“We came out determined, we were ready, but after a while we just fell apart,” Brown said. “We didn’t keep our composure.”

Coach Trevor said he is proud of his men. The team is coming away from Saturday night’s loss with a better grasp of what they need to work on, should they be lucky enough to face UC San Diego again in the West Regionals.

“We’re going to have to learn how to play through that physicality,” Trevor said “They are so physical with every drive; you’re going to get hit.”

Though the Gators only shot 37 percent to the Tritons’ 49.1 percent, Brown and Apsay held their team up, scoring 13 and 14 points in the game respectively.

Trevor said he’s looking at the bigger picture in the success of the Gator men, prominently shown this 2016-2017, and credits Apsay as a driving force of the team.

“We wouldn’t even be close to where we’re at right now, with our 25-5 record, without Coley,” Trevor said. “Coley has taken us a long way.”

Apsay shared the sentiment as he looked back at his time playing for the Gators leading up to his triumphant final season.

“When I came here two years ago, coach had a big vision and I wanted to be a part of it,” Apsay said.

The postseason has been a manifestation of coach Trevor’s vision. Despite a break in their CCAA Tournament winning streak, the Gators ultimately walked away with a victory in their historic season journey. Unlike UC San Diego, who made Regionals last year, advancing to the final round before ultimately falling to Western Oregon 60-55, SF State has not seen an NCAA tournament in 48 years.

For the Gators, Saturday’s loss is not a deterrent. The team will learn who their regional match-up will be tonight at 7:30 p.m. on Selection Sunday.

“We are definitely staying positive,” Brown said. “We know that the road hasn’t ended yet.”