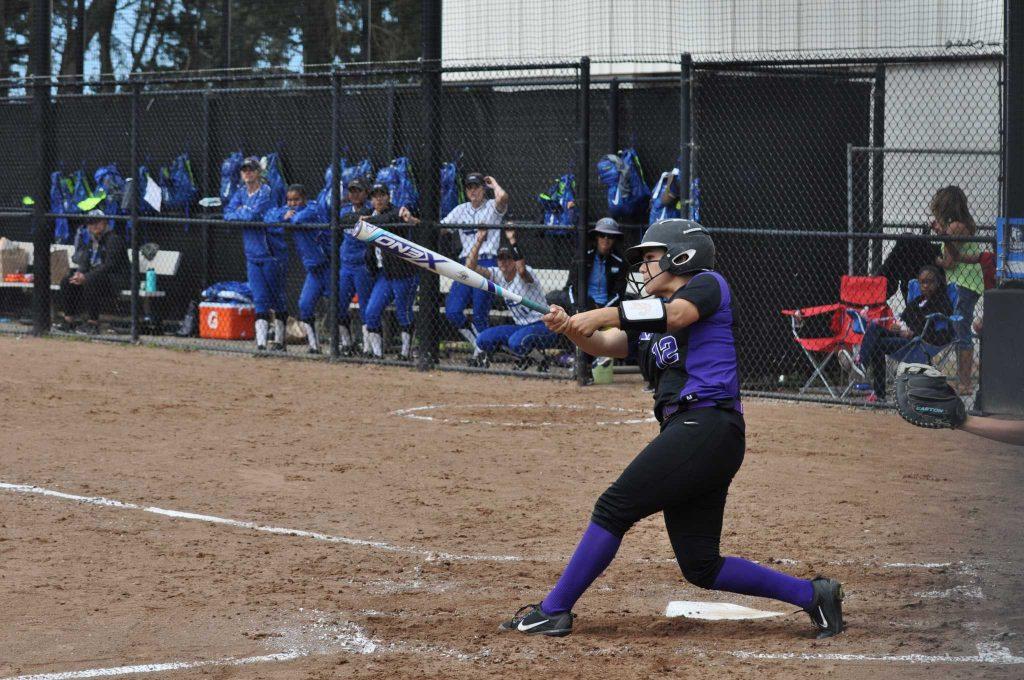 Gator pitcher Lindsey Cassidy put up a strong fight against the Cougars in game one but eventually fell 2-3 after a late rally wasn’t enough to grab the win.

Both teams left the scoreboard blank until the top of the third where the Cougars pushed a sacrifice bunt that resulted in the first run of the game, 0-1. The Gators loaded up the bases in the bottom of the third by capitalizing on errors but were unable to send any women home.

San Marcos continued to pressure SF State as they tacked on two more insurance runs in the top of the sixth. Down 0-3, pinch hitter Mallory Cleveland stepped into the box and sent a ball over the outfield fence with a two-run homer that closed up the run gap.

“At the beginning of the inning coach told me to be ready but I didn’t expect me to go in,” Mallory said. “Honestly, I was just trying to make contact and I was thankful for the hit – I just wanted to get to home plate because my team looked so pumped and I was just so excited.”

Outfielder and pitcher Aryn Guzman said the Gators came out strong but thought the hits just weren’t “falling in the right spots,” that they weren’t “stringing hits together.”

“Mallory’s homerun got us back in it, but I think we were just too excited and anxious to finish it.”

In game two the Gators were amped up and jumped on the Cougars early on, scoring once in the first and twice in the second inning.

Leading 3-0, starting pitcher for the second game, Guzman, was able to keep San Marcos from finding their way to home plate. Megan Clark stepped in to replace Guzman in the top of the sixth inning.

Just moments away from the Gators taking game one, the Cougars rallied together and were able to tie it up by stringing powerful hits together and finding holes that sent the game into extra innings. Able to keep San Marcos down, the Gators came up once more in the bottom of the eighth.

With runners in scoring position, second baseman Madison Collins knocked in the winning run with an RBI single, giving the Gators the 4-3 win and their second win of the four-game series.

“I wasn’t thinking that we were in extra innings,” Collins said. “A lot of times I would just breathe through it and tell myself it’s just another pitch and the next one ended up being the winning one, so it was nice.”

Head coach Lisa McKinney adjusted the lineup throughout both games and found that the right mesh for each game is a learning experience for not only the coaches, but the team as a whole.

“Taylor (Elliot) and I work together really well and we talk to each other before the games about who had good warm ups, we always have it on our mind about who could be a pinch hitter if someone is struggling,” McKinney said.

“We have a lot of faith in our hitters that they can go in and do the job and obviously Mallory Cleveland was an awesome example today.”

Although the series is split, McKinney believes she saw adjustments from her team and came away with lessons learned.

“I think we made a better adjustments today off the pitchers even though some hits didn’t go our way, but that’s just the name of the game,” McKinney said. “Overall I think we learned as a team what we need to do to get the W – just making sure that we play a full seven innings.”