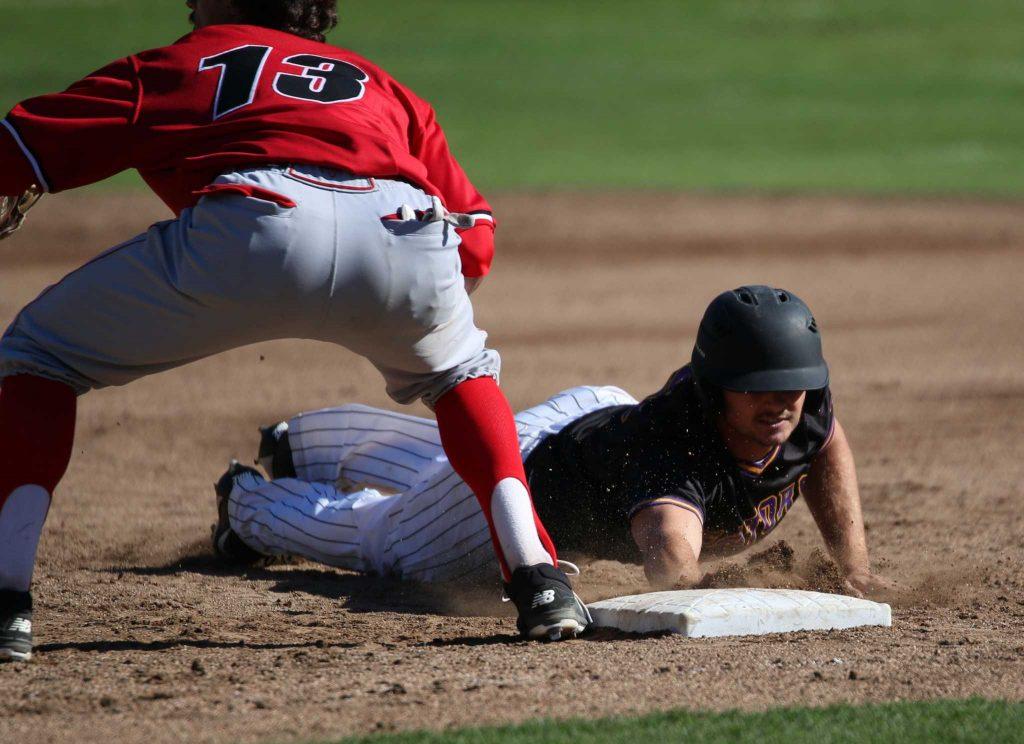 A rain-soaked February washed away any chance of the Gators playing at Maloney Field for the first month of the season. The Gators had two “home” games already under their belt coming into this weekend’s four-game series.

The Stanislaus State Warriors ended the homecoming party early in the first game. After the Warriors’ cleanup hitter reached on an error by Gator second baseman Zac Neumann in the second inning, the Warriors hit two singles and two sacrifice bunts that resulted in a pair of runs scoring.

The Warriors held onto a 2-0 lead until the sixth inning when they added on three more runs after a walk, pair of singles and an error by Gator third baseman TJ Conroy. The fifth run, scored on a single to center field, chased Gator starter Dillon Houser from the game. Houser finished 5.2 innings, allowing seven hits, striking out none, walking one and allowing five runs, only one of which was earned.

The Gators got on the board in the bottom half of the sixth thanks to a single by left fielder Jacob Lopez and a double to right by shortstop Bryce Brooks. Brooks finished game one 2-3 with an RBI, his sixth of the season.

The Warriors and Gators traded runs in the eighth, upping the score to 6-2. That margin was short lived, however, as the Warriors broke the game open in the ninth. The Gators gave up three runs on a pair of doubles, expanding their deficit to 9-2. A 1-2-3 bottom half of the inning sealed a game one win for the Warriors.

The Warriors slowly built up a lead again in game two, leading 4-0 by the sixth inning. The Gators plated a run in the bottom of the inning on catcher Dalton Pizzuti’s double, but still found themselves down three runs heading into the bottom of the ninth.

With the bases loaded and two outs, shortstop Jackson Kritsch knocked in one with a single, but it was the next batter, first baseman Chris Nicholson, that did the most damage. Nicholson’s two-run single tied the game at four and sent the Gators and Warriors into extra innings.

The Gators  traded the lead in the tenth, thanks to a single and a handful of walks in the fifth of the game.. The Gators threatened in the bottom half with a leadoff double by DH Jordan Abernathy, but went out rather quietly after that, succumbing to the Warriors, 6-4, for their sixth straight loss.

The Gators will try to get back on their game Sunday with another doubleheader at Maloney Field against the Warriors. First pitch for game one is set for noon and 3 p.m. for game two.