A Day Without Womxn: SF State’s Spin on the National Event 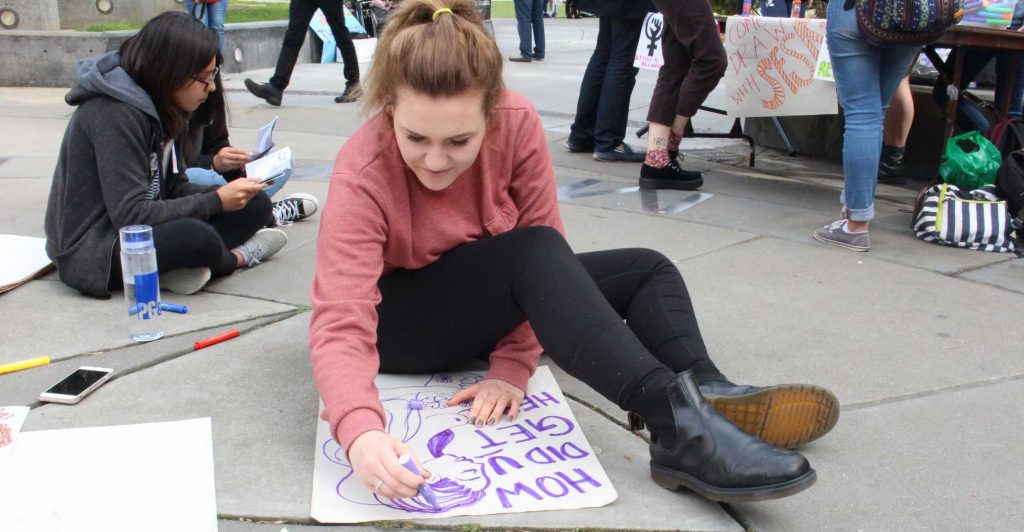 Students and allies gathered in Malcolm X Plaza to recognize “A Day Without Womxn” Tuesday afternoon.

Though the event was organized by San Francisco Students Resist, other student organizations were invited to participate, like “Everything Great About You,” an LGBTQ+ network and Unite for Reproductive and Gender Unity.

“We want to stand in solidarity with all women being attacked and make sure they have a safe space and encouragement to share their experiences,” said 20-year-old Alisar Mustafa, president of SF Student Resist. “We want to make sure we’re incorporating art and using art to express ourselves and raising awareness for the intersectionality of the issues that all women go through.”

Wednesday was the nationally observed “Day Without Women,” but organizers chose to hold their event a day early in order to stand in solidarity with people unable to participate in the official day.

“A Day Without Womxn” drew crowds of students throughout the two-hour event, and featured several artists and speakers who shared their experiences. A large group of people sat in the middle of the plaza, making signs and drawings to hang up around the plaza.

The signs reflected current problems regarding women’s rights and read things like,  “My body parts are not up for grabs” and “Take your politics off my body.”

Rachel Laventure, an 18-year-old member of SFSR, created a short zine called “Things I Wish I Could Say To…”  that detailed her experiences growing up as a multiracial person and how she wished she could have called people out for the microaggressions targeted at her.

“We all need each other moving forward,” Nilson Ralston said. “The contributions of women have been long unrecognized.”

Organizers stressed that the point of “A Day Without Womxn” was not to protest but to recognize the importance of women and demonstrate how different things would be without them, according to 20-year-old Annie Ford, a Spanish major.

“It’s supposed to be super relaxing and therapeutic, we’re just enjoying each other’s company,” Ford said. “We should all feel like a 10.”

Several students were seen wearing red string around their wrists as a symbol of solidarity with people who were unable to participate in A Day Without Women.

“In a culture where people aren’t protected, some women can’t afford to take a day off,” said Jillian Salazar, 27-year-old sexuality studies major and URGE member. “It’s important to make space for women who can’t resist with us.”