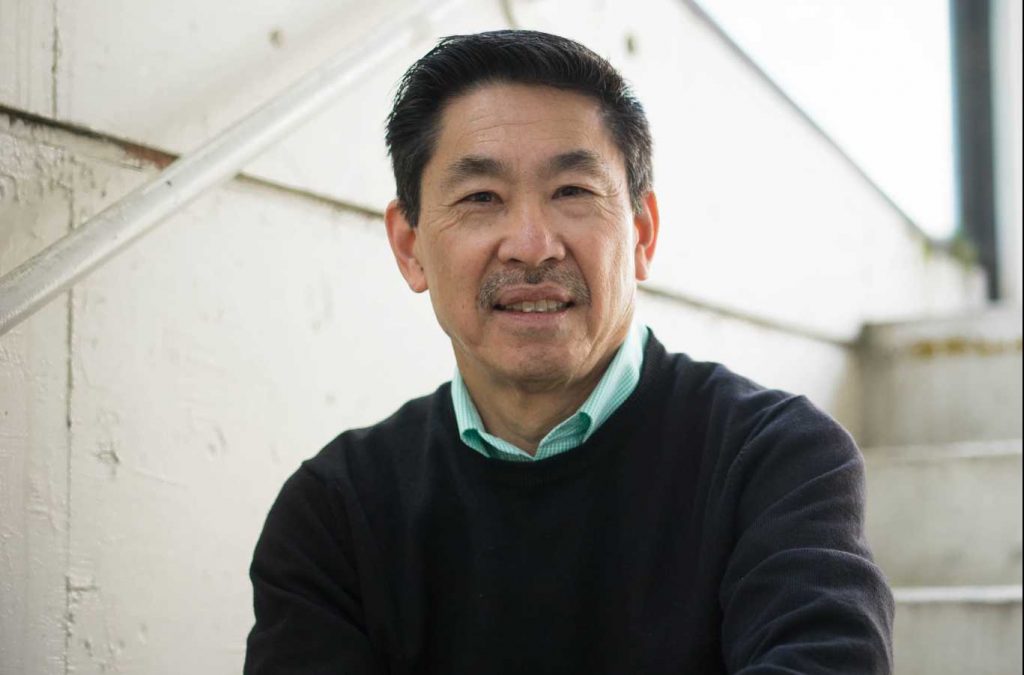 Jon Funabiki poses for a portrait on campus at SF State in San Francisco on Tuesday, February 28, 2017. (Sarahbeth Maney/Xpress)

Seventy-five years after the issue of Executive Order 9066, Asian Americans fear the rhetoric that led to the internment of Japanese Americans during World War II is experiencing a revival, scapegoating a new vulnerable group: Muslim Americans.

Despite this dark stain on American history, the continued hate and abuse toward immigrants and Muslim Americans has not subsided. Nationally, it has only gotten stronger.

“So much of what Trump wants to do against immigrants is very similar to anti-Japanese and racist attitudes that existed during the war,” said SF State journalism professor Jon Funabiki, whose parents were interned at Heart Mountain internment camp in Wyoming.

Funabiki credits the growing anti-immigrant sentiments in the U.S. to the rapidly-changing economy and the declining support for civil rights and the first amendment.

“He’s (President Trump) challenging everyone to be super patriotic and nationalistic, which is very dangerous,” says Funabiki.

“Words like ‘jihad’ are harmless. We use that word to describe self-defense, not violence,” said Modan. “And no one has the right to call me a terrorist.”

However, anti-immigration rhetoric is more than an idea, it has manifested into very real legislation under the Trump administration.

Days after President Trump’s inauguration, a directive to ban travel from seven Muslim-majority countries was enacted, sparking major protests in airports nationwide, including at San Francisco International Airport. The executive order was revised on March 6, removing Iraq from the list of banned countries, and giving exemption to current visa holders and permanent residents.

Although Trump’s defense of the travel ban plays into the hands of Americans who are fearful of terrorists attacks by Islamic extremists, critics believe the executive orders are in violation of constitutional and basic human rights.

Modan, who participated in January’s protest at SFO, witnessed disheartening scenes of families being separated during the protest.

“I almost cried,” Modan recalled. “But it also felt so amazing to see so many people come to support Islam and our people.”

Though San Francisco brings a sense of safety to Modan’s personal life, she recognizes that the city also has a history of taking discriminatory action against immigrants.

Following the attack on Pearl Harbor, men of Japanese ancestry and prominent community leaders were sent to a U.S. Army base on Angel Island, which served as a detention camp.

Christen Sasaki, an assistant professor in the Asian American studies department at SF State, said the FBI had an eye on Japanese community leaders prior to the attack.

The Angel Island Immigration Station Foundation shared one such story of Rev. Asataro Yamada, who was presumed guilty before he was tried. Before the Alien Enemy Hearing Board in San Francisco, Yamada had to proclaim his loyalty to the United States. Despite his son having served in the U.S. Army, the FBI ordered him to be interned at Angel Island, before relocating him to the Heart Mountain Relocation Center in Wyoming.

Journalists, ministers and those who were labeled by the government as “pro-Japan” were detained at Angel Island, many for the remainder of the war.

The targeting of Muslim Americans parallels the Japanese American experience during the internment era, according to Sasaki.

“The executive order was passed by FDR because of mass hysteria,” said Sasaki, who specializes in Japanese American history and believes the same hysteria is drumming up national fear of Muslim Americans and immigrants.

Though Sasaki clearly sees the parallels between anti-Japanese rhetoric in the 1940s and anti-Muslim rhetoric of today, Funabiki said many Americans are still blind, even citing the internment order as a precedent to the travel ban.

“People aren’t used to being with people with diverse backgrounds; people feel threatened,” Funabiki said. “I fear that they are not focusing on the root causes of the problem, and they are attacking the wrong problems.”

Roanoke Mayor David Bowers in Virginia compared the attack on Pearl Harbor to terrorist attacks by Islamic extremists in a statement back in November 2015, after halting assistance to Syrian refugees.

“It appears that the threat of harm to America from ISIS now is just as real and serious as that from our enemies,” said Bowers.

Carl Higbie, a former Navy SEAL and former spokesman for the Great America PAC, defended his choice of words after calling Japanese internment a “precedent” to a suggested Muslim registry when he appeared on Megyn Kelly’s FOX news show this past November.

“Call it what you will — it may be wrong,” said Higbie. “But we need to protect America first.” Since the travel ban was issued in January, several states have filed lawsuits against the federal government.

Growing up, his parents dodged questions about the days of their internment. “They wanted us to blend in as much as possible,” said Funabiki of his parents, Mason and Grace Funabiki.

Funabiki’s parents married in fear of being separated during that time. “They didn’t know where they were going; they were just told to get on a train,” Funabiki said.

Sasaki describes the trains used to transport Japanese Americans where the windows were boarded up and people were packed in like sardines. “Sometimes what we forget is they didn’t know whether they were going to come back,” Sasaki said.

Sasaki said the Japanese American community is standing strong behind the Muslim American community. Many joined the protests at airports and the Women’s March in January to voice their dissent for the travel ban.

George Takei, an internment camp survivor and well-known Japanese-American actor and activist, condemned the Trump administration and travel ban in an interview with Democracy Now in February.

“He’s [Trump] not learned the lesson of the internment of Japanese Americans, because if he’s really learned that lesson, if he has studied that, he would know that the lesson is we must never do that again,” Takei said.

Funabiki and Sasaki urge the media and America’s youth to continue the fight against bigotry targeted at minority groups in the United States.

“Despite the hardships that we’re going through right now, what I find so inspiring about ([what)] the younger generation is doing is that you are learning and taking the time to learn,” said Sasaki. “It gives me hope.”

[/media-credit] Timeline comparison of then and now (Sadie Gribbon, Xpress).