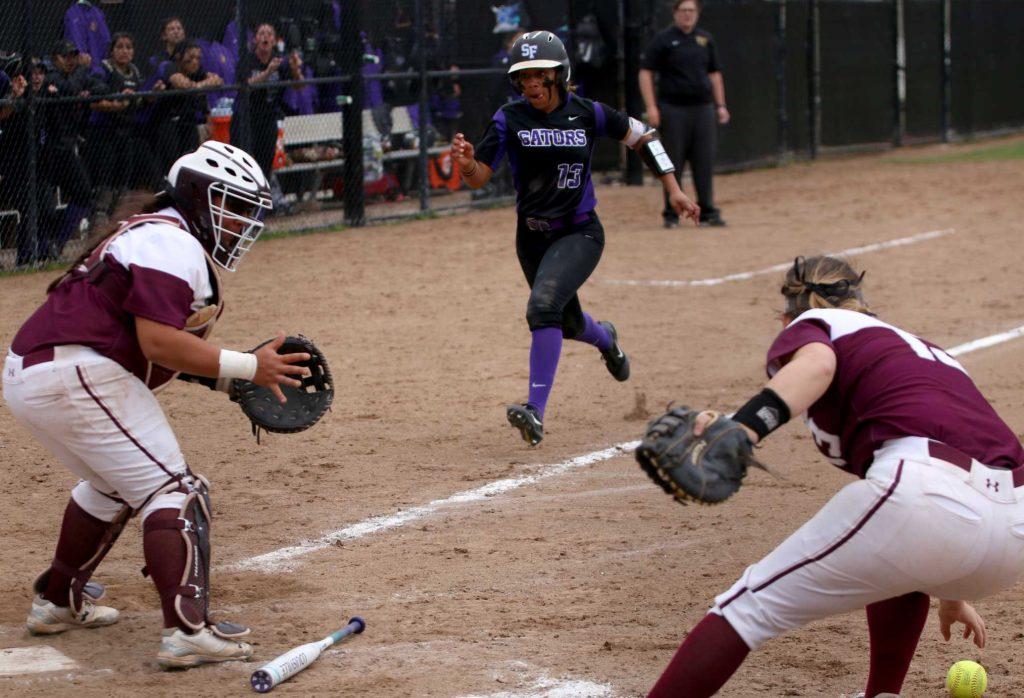 SF State Sophomore, INF, Madison Collins (13), runs towards home base as the gators rally to come back from two runs in the bottom of the 4th against the Chico State Wildcats at SF State on March. 15, 2017. (Kyler Knox/Xpress)

The Gators battled their hearts out but were unable to shut out nationally-ranked number six Chico State University in the second half of the softball series Wednesday, March 15 at SF State.

First game pitcher Megan Clark had a strong hand hovering over the Wildcats and was able to keep them from reaching home plate through six innings. Behind her were eager Gators unafraid to lie out to save runs.

“They weren’t afraid to go for the dive so it was really nice to see them laying out and keeping the ball in the infield to prevent runs,” head coach Lisa McKinney said.

Both teams saw no runs through six innings, as it was an intense battle between pitchers and defense. At the top of the seventh, Chico State lit up the scoreboard 4-0 with a grand slam to strike first.

The Gators refused to hang their heads and continued to fight back against the sixth national ranking team, scraping up two runs in the bottom of the seventh with a two-run RBI from outfielder Aryn Guzman. However, the Wildcats took game one 4-2.

“We knew Chico was going to come back fighting because they’re not used to losing,” third baseman Gabby Reta said. “Before yesterday’s game they’ve only lost one game the whole season.”

In the second game the bats came alive for the Gators as they struck first early in the bottom of the first inning with an RBI from Reta. Second game pitcher Lindsey Cassidy, along with the defense, did not allow Chico State to reach base until the third inning.

In the top of the third the Wildcats found themselves pulling ahead 2-1 and tacked on another two runs in the top of the fourth. Leading 4-1, Gators closed the gap 4-3 with RBIs from second baseman Madison Collins and designated hitter Delanie Chrisman.

SF State once again pulled ahead during the bottom of the sixth 6-4 but tied with Chico 6-6 in the top of the sixth inning.

With tensions high, Chico produced three runs and the Gators were unable to answer back, giving the Wildcats their second win of the day with a score of 9-6.

“Whenever a team drops two they’re going to come out and fight a little bit harder so I feel like Chico came out stronger today,” Clark said.

Despite the loss, McKinney saw power and desire from her girls and was excited to see the team compete to their fullest capability.

“We have all the faith in the world in our hitters and we know what they’re capable of and I think they did a really good job of feeding off of each other,” McKinney said. “I was proud of all the hits that came together and I was really happy with how the girls responded – down 4-1 and came back to score a couple.”

“I think this is a really positive thing for us that we are on an upward slope coming out of this,” Reta said.  “We just need to come into the next games knowing we can play with the best in the nation and spin that for the next series.”