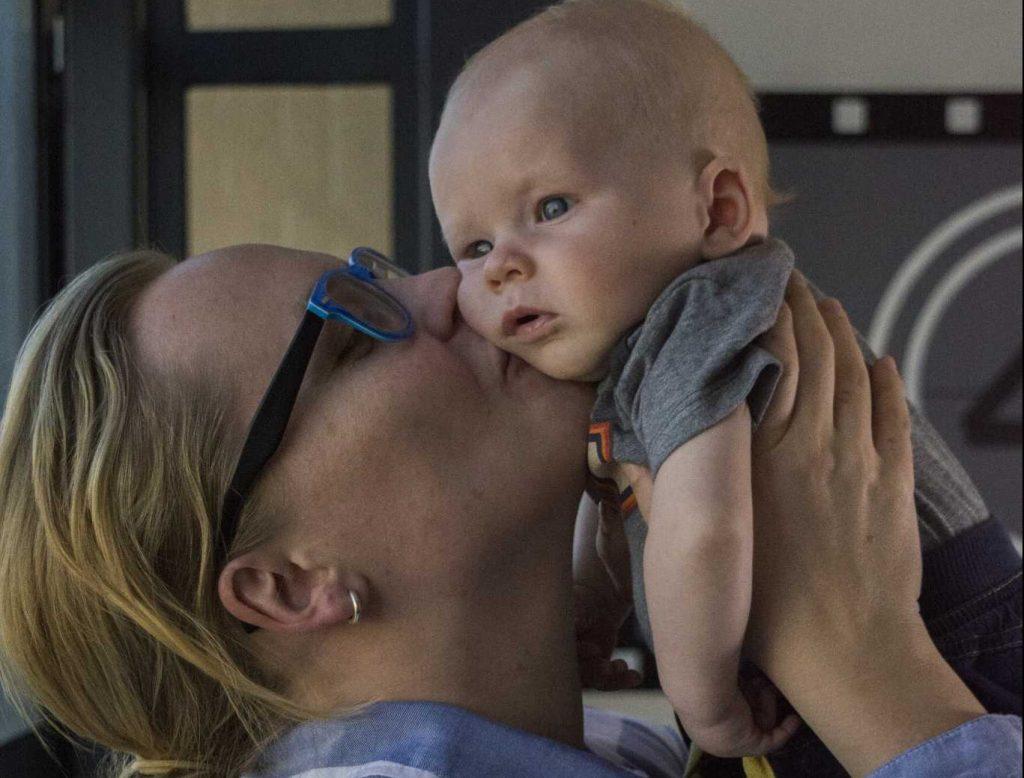 Sophia Schmagold-Stevenson, of cinema major, and Bennett Stevenson, her 4-month old son, pose for a portrait on the 4th floor at Fine Arts Building of SF State campus on Tuesday, March 14, 2017. A room at the building has been reserved for Schmagold to pump breast milk, for she wasn't informed there are locations on the campus designated for this service. (Lee Kin/Xpress)

Student mothers are struggling to find a private place to pump breast milk and make diaper changes due to the lack of campus resources for students who have children.

According to the Mayo Clinic, pumping stimulates milk production and it is recommended that women pump “for 15 minutes every few hours during the workday.” However, for nursing moms who spend a good amount of their time away from home and have no access to a private room, pumping as often as needed can be challenging.

SF State currently offers three lactation rooms accessible to both faculty and students. These rooms are located in the library, science Building and Children’s Campus. SF State Human Resources reports that at least 20 students have used these rooms since August 2015, but Sophia Schmagold-Stevenson was never informed about these rooms, and had to look for alternative options.

In the beginning of spring semester, Schmagold-Stevenson, mother to a 14-week-old boy and currently in her last semester at SF State as a cinema major. booked a studio in the Fine Arts Building to pump breast milk. She was too shy at first to admit why she needed the private room, so she told the person in charge that she needed some “quiet time.” Out of guilt, she later came clean and informed him that she reserved the studio to pump her breast milk.

“I talked to my midwife and my milk went down because I didn’t pump enough while I was away from my baby,” Schmagold-Stevenson said. “This all resulted because I didn’t have a safe place to pump.”

She resorted to supplementing her son’s feeding with some formula out of concern for his low weight.

According to Academic Institutional Research Director Darryl Dieter, the University has no data showing how many registered students are mothers. However, SF State does know of 72 students who are parents and enrolled at the Early Childhood Education Center, according to Interim Director Erica Almaguer.

“In regards to nursing mothers, If they are enrolled at the ECEC, I will find a space for them to pump here at the Center,” Almaguer said.

Glendy Peraza, a junior criminal justice major enrolled at the ECEC, drops off her child at the center on Tuesdays and Thursdays. She chooses not to pump on days she has classes.

“I didn’t have a place to pump so I didn’t pump all day and just pumped at home,” she said. “Even if I knew about the lactation rooms, I don’t think professors would have granted me permission to leave class to pump.”

Schmagold-Stevenson, who expressed a huge amount of gratitude for being fortunate to have such understanding professors, said she would love to see more facilities and resources, such as more changing tables and accessible lactation rooms.

“We should change something in the school,” Schmagold-Stevenson said. “I’m lucky to have professors who are willing to accommodate me during this time, but there’s probably a lot of nursing moms who need a private space but are too shy to ask.”

The University has one changing table on campus, which is located in the library. When Schmagold-Stevenson needs to change her baby, she does it in a room one of her professors provides. On the other hand, Peraza does not have this kind of private-room access. Peraza once had to change a diaper on the floor of the business building when her baby had the stomach flu because the library was too far.

According to SF State’s Facilities and Services Enterprise, the department of Capital Planning, Design and Construction was in charge of installing changing tables. A CPDC representative said he did not know who was responsible for the decision to set up the changing table in the library, and it’s still unclear whether there are any plans to add more in the future.

“We try to install baby changing stations whenever we open a new restroom and we’re looking into how we can best identify their locations on the campus map legend,” Mary Kenny, director of news and new media, said.