From books to breaking, college breakdancers unite for competition and community 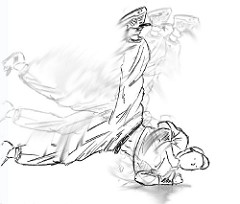 On Saturday, the SF State breaking (commonly known as breakdancing) team will face off against groups from up and down the West Coast in the Unified Collegiate Breaking League’s 11th annual breaking competition at Danzhaus Dance Center in San Francisco.

The competition, the only of its kind specifically designed for college students and their teams, has been held in Southern California for the last 10 years, but UCBL 2017 will be hosted in San Francisco for the first time this year to accommodate the higher diversity in locations of competing teams.

Twelve teams coming from Washington down to San Diego will compete for scholarships and to see who will hold the 2017 title.

The teams are comprised of undergraduates, recent graduates and alumni from each school who come together to not only be better dancers, but to be better students as well.

“I usually use breaking as a tool for relief in my study methods,” said Luis Prado, the president of the San Diego State University team. “Whenever I feel high amounts of pressure or whenever I’ve been studying for too long, I take a 10-minute b-boy break.”

Because most breaking competitions are pro-focused, this UCBL event sets itself apart because it only caters to college students. Scholarships are awarded for academic performance, leadership and creativity.

Since participants are current or recent college students, the application process for the competition focuses more on the academic aspect rather than dance by having teams submit essays.  This year, applicants had to submit short social media videos answering the question, “How does your club show passion, perseverance and unity?”.

Breaking is an often-misunderstood form of dance and these teams give new meaning to the previously held misconceptions of what breaking is.

“A lot of it has to do with its roots, it’s a relatively new dance,” said Murillo. “It started in the late 70s… it’s controversial because when it was born it had a different look. It was born in the Bronx though poverty and strife. It was born through primarily African American and Latino communities and it was an outlet for gangs. Instead of fighting they would break.”

Today’s breakdancers are part of a new generation who don’t necessarily know the root of the art. This competition helps students connect, engage and learn from others who have been part of the breaking world for years.

“It’s important as dancers to understand where our dance came from and what it endured to be molded into the dance that it is today, which is where academics come into play.”

These teams are made up of students and athletes with a common interest and tend to form a community, or family, that helps them get through the hard times of being in college.

Lance Chau, vice president of the University of Oregon team, appreciates how the competition makes it possible to meet and quickly become friends with people from so many different places. “To not even speak the same language and to be able to hang out so soon is something not seen in other sports,” Chau said.