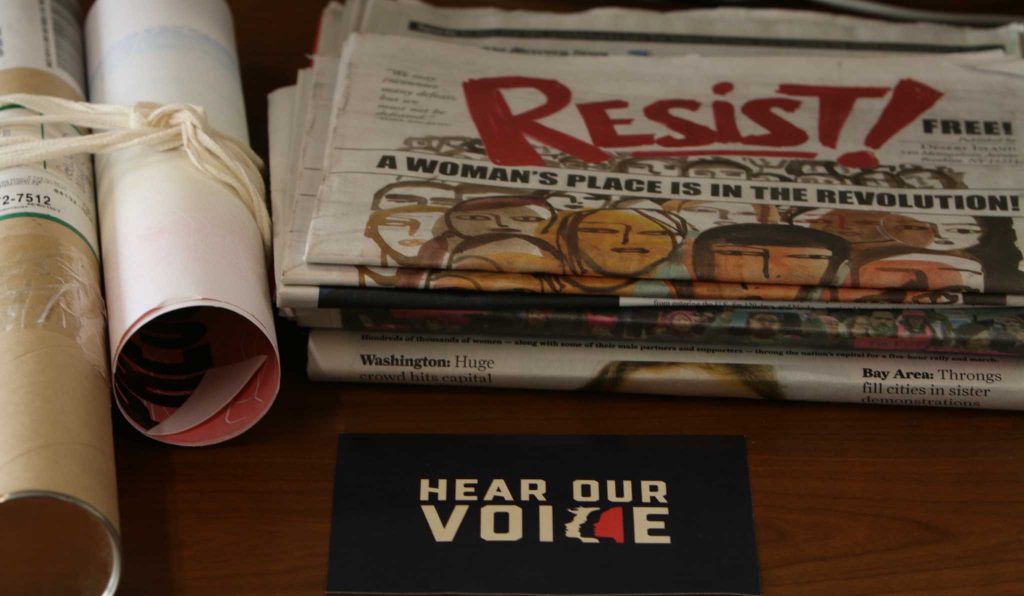 On Feb. 16, 2017 Mattie Taormina, the director of the Sutro library, shares a collection of signs from The Women's March. (Laila Rashada/Xpress)

The Sutro Library at SF State is currently collecting handmade signs, handbills, clothing and other memorabilia from the Jan. 21 San Francisco Women’s March to preserve the historic day for future generations.

The Sutro Library, located on the the fifth floor of the J. Paul Leonard Library, is a California public research institution under the California State Library system and is open to the public.

Mattie Taormina, the director of the Sutro Library, is in charge of collecting and cataloguing the items donated by people from all over California who participated in the Women’s March. Donated items like protest signs and handmade pussycat hats will be preserved as historic memorabilia.

As a participant in the march and the head of a state library, Taormina felt it was her duty to preserve this aspect of California history.

Personal testimonies often accompany the donated memorabilia, which tell the story of the people who participated in the march and what it meant to them. Contributors range from professional artists to children. Taormina said receiving all the items and their stories has been very powerful.

[/media-credit] On Feb. 16, 2017 Mattie Taormina, the director of the Sutro library, shares a collection of signs from The Women’s March.

“People are organically emoting how they feel about the election,”Taormina said. “They’re not professional protesters, they’ve never done this before. It’s so raw and gritty.”

The memorabilia is intended to be used as primary sources that historians and scholars will someday need, according to Taormina, especially if they’re studying feminism and grassroots protests.

Part of the inspiration to start this collection was early suffragette movements and the lack of evidence preserved from that time period.

“Why do we have to wait 30 years to see if it’s important? Chances are it will be important,” Taormina said.

While she was not able to attend, Cheyenne Liddicote, a 22-year-old environmental science major, agrees that the march was a historic day.

“There is a lot of tension surrounding the recent election, but also a lot of people standing up for equality and justice,” Liddicote said.

She said the Women’s March was a stand by Americans against division and oppression at the hands of government.

“I think people will look back on that day decades from now and see it as an organized opposition to the discrimination and injustice in this country.”

One problem Taormina has encountered during the formation of this collection is preservation. Since it rained on the day of the march, a lot of the items show signs of wear, especially given that participants weren’t focused on conservation. However, Taormina believes that this could also be beneficial to the value of the memorabilia.

“I’m showing signs that are completely beat up so you know this happened and people marched,” Taormina said. “It shows that it had an impact and someone else saw it, not just me.”

The collection is also intended as a teaching opportunity. Suzanne Pullen, communications lecturer, brought students from her Rhetoric of the Media and Basic Understanding of Research Methods class to give them an opportunity to differentiate between primary and secondary sources and to generate a more critical eye.

“It was eye-opening,” Pullen said. “It put it into context that this will become a historic moment. All of the things we produce become a part of a larger conversation.”

Due to storage constraints, Taormina is only collecting physical memorabilia from the march. She is still accepting donations from anyone who was present, although once the collection gets too big, she’ll have to start making choices about which items to keep.