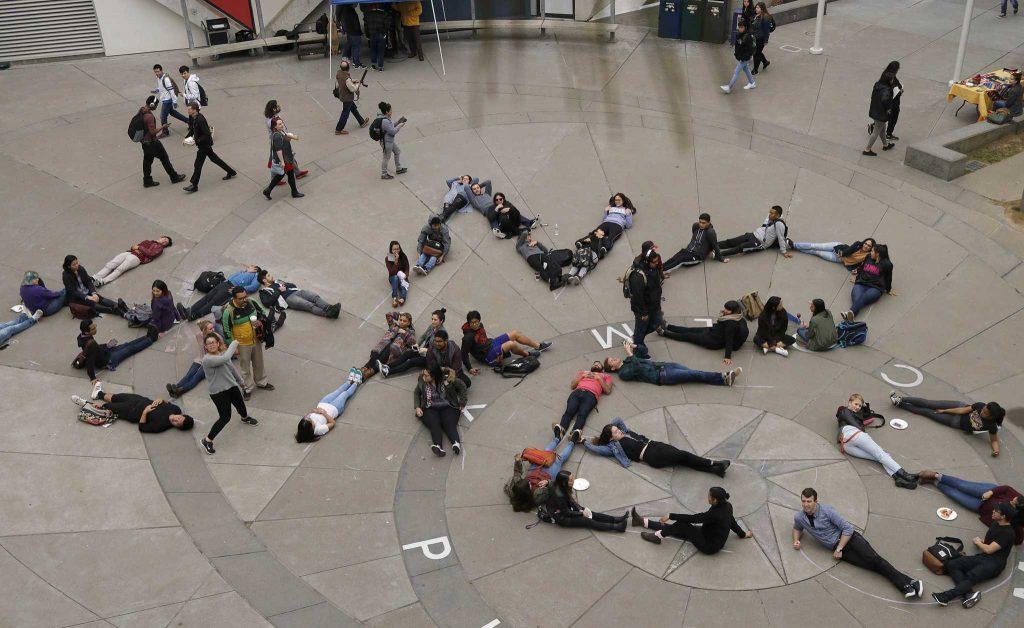 Students spell out “NO HIKES” with their bodies in the Malcom X Plaza in opposition of the tuition price hikes at SF State on Wednesday, March 15, 2017 in San Francisco Calif.. (Mason Rockfellow/Xpress)

Many SF State students are worried about the future and affordability of their education after the California State University system Board of Trustees approved a 5 percent tuition hike, despite systemwide student protests.

Associated Students Inc. encouraged students to write testimonials and take a bus ride down to Long Beach, home to the CSU system headquarters, to protest against the tuition increase. As the Board of Trustees voted on the controversial tuition hike March 22, CSU students from across the state stood in front of the headquarters, passionately shouting in objection to the hike.

Although many students protested the hike, others felt dejected.

“It feels out of my hands,” said SF State student Sonia Yousfi.

Effective for the Fall 2017 semester, the increase could prove detrimental to SF State students in particular, whose housing costs to live in the Bay Area may exceed the cost of tuition.

“I could live on campus but I already pay enough money to live here, getting here and tuition is already pretty high,” said 18-year-old Cameron Stevenson, an undecided major at SF State.

For students like Stevenson, who regularly commute from Oakland to SF State, living in San Francisco to be in close proximity of the school is difficult and the tuition hike makes living close to campus nearly impossible as well.

The new tuition hike will cost students an extra $270 a year. Although the CSU reports the yearly base tuition will increase to $5,742, many full-time SF State students already pay over $6,000 due to additional fees.

The CSU tuition increase, the first in six years, is projected to bring in a net revenue of $77.5 million, according to a CSU press release. It was explained in that same press release that the revenue will fund initiatives like Graduation Initiative 2025, which will allow CSU campuses to double the four-year graduation rate.

“Through the University’s robust financial aid program, we will ensure that students who require the most financial assistance will not face any additional burden associated with the tuition increase,” assured Steve Relyea, CSU executive vice chancellor.

“Make schooling not about money, not about a profitable thing, but about educating the masses as a whole and making it offered to everybody,” Schlichting said.